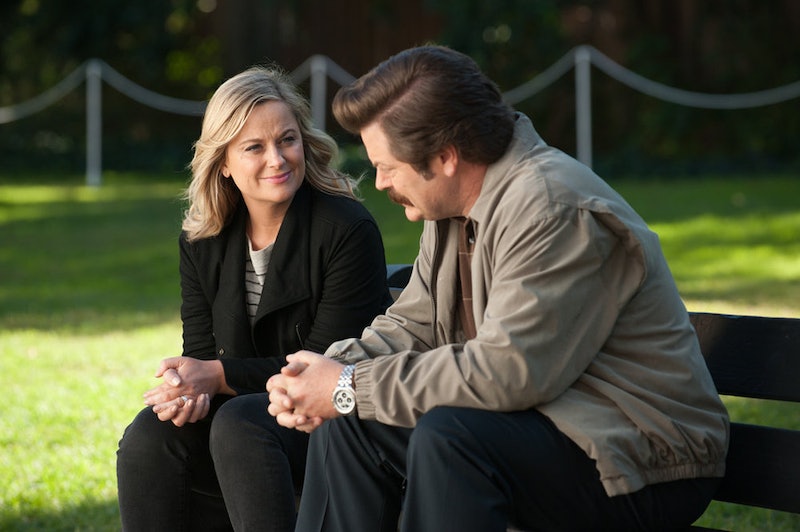 The Parks and Recreation series finale was perfect, and I don't say that lightly. Usually after a show ends, I spend a day or two reeling about it, wondering what could have happened to certain characters or cursing the writers for giving us such a weird ending. With Parks and Rec, there couldn't have been a more fitting goodbye to Pawnee, and to my surprise, I cried more during it than during Parenthood 's big farewell. What made the Parks finale so satisfying was that we got a jump forward in time to each character's future — something that Parenthood also did well at the end of their episode — and enough closure to feel like we'll be OK without seeing Leslie & Co.'s day-to-day lives anymore. Even though there were a few failures along the way (and not just Gerry as a human coffee pot), everyone was happy with where they ended up, and it helped that a few special guests (a.k.a. Ann and Chris) popped in to help say goodbye, too.

It's hard to pick a favorite moment from the finale, so instead, I present a ranking of everyone's futures. This is based on the amount of crying that I did while watching the flash-forwards and is illustrated in cry GIFs. These were all happy tears, of course, except for a few sad ones for Lil' Sebastian. I love you and I like you, Parks and Rec.

When his funeral came up in the flash-forward, I may have gotten a little misty. But, of course, it was all revealed to be an insurance hoax with Mona-Lisa and I was laughing as his singing was what sold him out.

Billy Eichner is fantastic as Craig, and I was happy to see his future. When he got married and Ron was Typhoon's best man, I got a little choked up. I'd watch a spin-off of just Ron and Typhoon.

After so many years of torture, Gerry finally got everything he wanted with many, many terms as mayor, and his wife, Gail, looked like she was 30 when she was approaching 100. It made sense that Gerry would have the only real onscreen funeral, and no one was sobbing their eyes out when he passed — it was one fitting last joke about how they spelled his name wrong on the tombstone.

It is perfect that Donna is still living a fabulous life, and when she started a non-profit for her husband, Joe, with April, I felt a few happy tears burning in the back of my eyes. What really got me was seeing her with Tom, and it made me go back and watch the "Treat Yo Self 2016" episode again.

If I looped Ann and Chris' return in with Leslie and Ben's flash-forward, they would be at No. 1 on this list. But to be fair, I'll just say that the idea of Leslie and Ann's kids getting married one day is amazing, and hearing Chris say lit-rally made me smile so big that I probably almost cried.

I teared up a little when Tom got success and planned to open 20 restaurants with helpful advice from Gerry and Ben, and I teared up a little more when he lost his entire empire and got a pep talk from Lucy. But what really got me was when he was introducing the types of successes (and one failure) in his book, all named after his Pawnee best friends.

As one of my favorite couples of all time, saying goodbye to April and Andy would have made me cry either way. But when she finally decided to have kids with him, wore zombie makeup and listened to "Monster Mash" while giving birth, and then announced she was having another baby? I lost it a little bit.

Just thinking about the big smile on Ron's face as he canoes away at the National Park could make me cry. Leslie gave him the perfect career, allowing him to walk around a beautiful park for a living, and after all of the stress of the two friends being enemies for half a season, this is the ending I needed.

Of course Leslie and Ben made me cry the most. I can't even begin to count the ways, but some of the biggest moments were Ann and Chris' return (and Leslie welling up as she saw everyone reunited), the entire series of goodbyes she gave everyone throughout the episode, partying with Joe and Jill Biden, and most importantly, when Ben decides to be selfless and let Leslie run for governor. Oh, and her entire speech after she's governor for two terms, her pep talk to April about having someone new on her "team," and the very high likelihood that she's president in 2048.