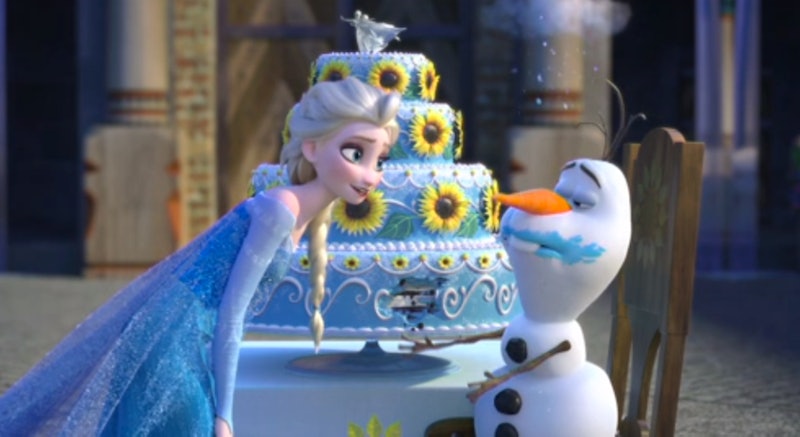 Disney's Frozen has left an undeniable mark on not only animated film history, but essentially, our culture. You would be extremely hard-pressed to find anyone who wasn't absolutely captivated by the story of Elsa and her younger sister Anna, and since its release, fans have been begging for more. The insatiable appetite has led to endless speculation about a Frozen sequel, and although nothing has been confirmed yet for Frozen 2, we can be appeased for a bit with the just released trailer for the spin-off short film, Frozen Fever. OK, so this is great and all, but it's so short that naturally, I have so many questions!

The Frozen Fever preview gives us a tiny glimpse into the seven minute film, which will set the stage for a big celebration Elsa is planning for Anna's birthday. And because this is a Disney film with characters that we know and love, some hijinks will definitely happen to make things run not so smoothly, and we know one of the major parts of the plot is that Elsa will get a cold which leads to her icy powers going a bit haywire... again. Ugh, can't our girl catch a break? Well, now that we've got the basic plot out of the way, I closely examined the short clip to come up with some questions of my own which can satisfy us until the March 13 release alongside Cinderella.

Did Kristoff Paint That Birthday Banner On His Own?

Most Important, What Flavor is Anna's Cake?

It looks like chocolate for sure but the possibilities here are endless. German Chocolate? Black Forest? Blackout?

What Song Is The Choir Singing In The Street?

Is it the song playing in the trailer? It's been confirmed that the short film will have a brand new song so it could either be this new song or "Happy Birthday," but I'm hoping for "Let It Go" part deux.

Why Is Anna Carrying Around a Massive Loaf of Bread On Her Birthday?

We see her holding the bread when Elsa is directing the choir and they are riding on a bike in the palace. Maybe Anna just loves her carbs just as much as the next girl.

Why Does Marshmallow Look So Sad and Confused?

I don't like the look of Elsa's hulking bodyguard looking concerned.

Where Did All of Those Little Snow Children Come From?

There's a lot of them. Does Olaf have a secret he is hiding from us?

Why Does The Party Look So Empty?

She's the Princess of Arandelle, where are her friends and subjects? Anna deserves better than that!

Why Does Elsa Have a Look Of Horror in The Last Shot?

Anna looks genuinely surprised and thrilled but Elsa is standing behind her with a shocked look on her face. Did the birthday pyramid crash? Did Olaf eat the entire cake?