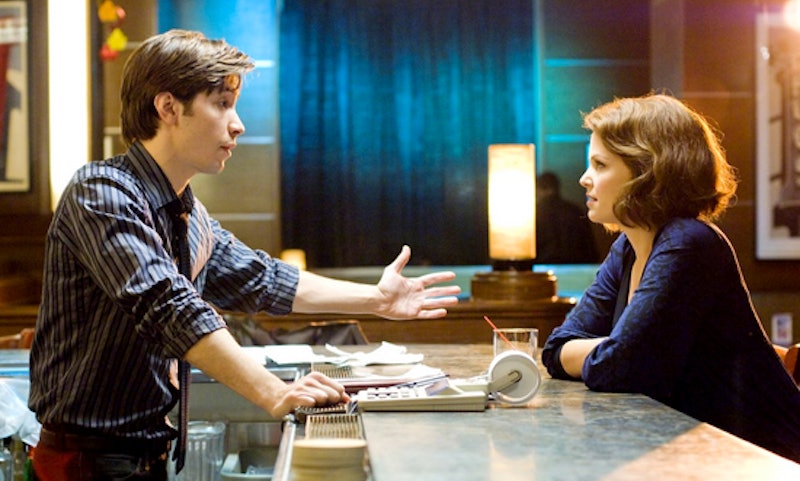 As everyone who's ever been on a first date knows, dating is anything but easy. It’s a trial and error process, and sometimes the bad dates outweigh the good ones. But, as they say, you need to kiss a lot of frogs, or, in the case of dating, you need to sit through a lot of boring, weird, and sometimes even completely ridiculous interactions that you know no one will believe when you try to tell them about it later.

If you make it through a first date, the big decision that comes next is whether or not the second date should happen. You have to weigh the good and the bad, and decide if whatever was bad about it was small enough that it could be overlooked. We all say stupid things when we’re nervous, but some people just say stupid, misinformed things all the time; so it’s your job to figure out where nerves end and the real person begins. If you think that person is worth another shot, then great! If not, don’t force yourself into something that you know is just going to be meh.

1. There Are Lots Of Awkward Silences

Awkward silences, especially on a first date, are just inevitable. It can sometimes be a bit trying to keep a conversation going smoothly with someone you've just met. That's normal.

But if you're trying to dig stuff up the whole time to fill the silences, feeling the need to fill pauses just because they're so uncomfortable, that's another matter. You should never feel like it's your job to seem attractive or interesting to someone, especially when you're not even sure that you're so attracted to them. No good can come of it.

2. You're Thinking About OKCupid

You know, because anything, even OKCupid, is better than this awkwardness. And at least at home, in front of your computer, you can just hit delete when things get weird.

3. You Feel Obligated To Drink Another Round

You should never feel pressured to be polite or drink more than you're actually in the mood to. Period. If someone makes you feel that way, it's just a bad sign.

4. You're Not Getting Any Butterflies

Sure, chemistry can take time to develop. But butterflies are not something that come later on in a relationship — there should be signs of them early on. If you don't feel anything like it on the first date you should keep moving.

5. You Would Use The Word 'OK' To Describe Them

6. You Have No Desire To Look At Their Texts The Morning After

If you like someone, you know you'd want to look.

7. They Make You Even The Slightest Bit Uncomfortable

Whether it was the way they looked at you, the things they said, or their personality in general, if you feel uneasy at any time, that's a big red flag. You have intuition for a reason, and where it really comes in handy is when you're dating. Listen to it.

8. They're Rude To Your Server

One of the worst qualities a human being can have is being rude to people who are either trying to help them. If your date puts down your server or bartender in any way, speaks to them condescendingly, or skimps on the tip, RUN. You do not want that type of person in your life.

9. They Use The Word ‘Chick’ To Reference Women

First of all, gross. Secondly, sexist much? The type of person who uses the word "chick" is probably the type of person to casually throw around other, even more degrading words. Nope; not having it.

10. They Laugh At Your Opinions

So, you're sitting there talking about something as small as how you love the color blue, and you're met with laughter. Breaking news: We're all entitled to our opinions and beliefs, and just because someone else's might differ from ours it doesn't mean laughing at them is OK. That's just condescending and childish.

11. They Don't Let You Get A Word In Edgewise

There are those who love to hear themselves speak and those who just don't care about what others might have to say. Although neither quality is particularly good, you can't totally fault the person who loves to hear themselves talk, because we all do sometimes. But if your date just does not let you get a single word in, or talks over you when you try to interject, that's no good. It shows they just don't care about what you have to bring to the conversation.

12. They Don’t Ask Anything About You

The whole point of dating is to get to know people so you can do that whole falling in love thing and find an awesome partner. If your date is too busy talking about their past, present, and future without even once asking you a single question, then ugh! You don't want to waste another Saturday night on that.

13. They Spend Time On Their Phone

You should decide for yourself, before you even go into the date, how many glances at their phone, texts, or "Sorry, I have to take this call," instances you're willing to accept. If they go over that amount, then you know they're already in a relationship — and that relationship is with their phone.

Eye contact on a date is essential! Research has found that when we link eyes we're conveying our interest, whether or not we can be trusted, and intimacy. If someone isn't looking you in the eye, they either don't care, or have something to hide. Of course, there are those who are genuinely uncomfortable with eye contact, but even those people make an effort.

15. They Talk Smack About Their Ex

I mean, come on. For starters, no one should be talking about their ex on a first date. That's just a given. But talking smack about them or saying how "crazy" they were is just poor form — and yet another red flag. Not every relationship ends on a good note, but that doesn't mean anyone has any right to drag their ex through the mud — especially to a stranger on a first date.

16. They Act Like It's A Given That The Date Is Going Well

I think we've all been on dates where it's just awful, and somewhere in the middle of the evening the person we're out with says, "This is going really well!" I know I have, and it's just awkward with a capital A. Look at this way: If you're not on the same page on the first date, it shows you might never be on the same page ― or that the person you're out with is in some sort of heavy denial. Neither scenario is good.

17. You Still Don't Know What They're Looking For

If they didn't give you any idea what they're looking for on a first date — something casual, a serious relationship, etc — that's a bad sign. You don't really want to waste your time with someone who doesn't know what they want. You need to figure that out for yourself, if you haven't already.

18. You Can't Remember Any Details Afterwards That Make You Smile

If you can't think of anything that makes your stomach flip even a little the morning after, it's no good.

19. You Just Weren’t Feeling It, For Whatever Reason

Although it takes two to tango, at the end of the night, whether you go on a second date is about you and what you're feeling. Even if your date is just dying to see you again, if you're not into it, then don't sign up for a second date. You need to think about yourself first. It isn't selfish or mean — it's knowing what you want and not settling for anything less.