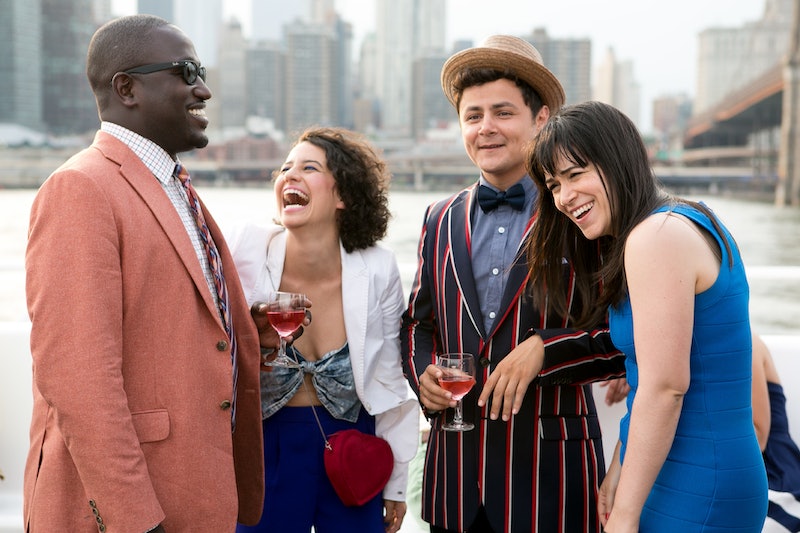 In honor of Jaimé passing his citizenship test, Ilana, Jaimé, Lincoln, and Abbi went on a booze cruise in Feb. 25's Broad City (thus the aptly-titled episode "Citizen Ship" — oh, how I love these women). Abbi's real roommate Melody was their hookup for the boat around the Statue of Liberty, so did we get to meet Abbi's roommate Melody on Broad City ? Bevers (Melody's boyfriend) is a constant annoyance to Abbi since he lives in their apartment — even when Melody is not there. When Bevers confessed to Ilana and Abbi that he was going to propose to Melody in "Citizen Ship," a Melody spotting seemed like a sure thing. But Broad City had other plans.

At first Abbi resisted the idea of Bevers proposing to Melody, but when she realized that if they got engaged, the pair of them would get their own place — she quickly changed her tune. And as Bevers was going to publicly propose — turning the booze cruise to a love boat with help from the DJ — we caught the teensiest glimpse of Melody in the crowd. Of course, she was completely obscured by the other boat attendees and a backlight as she gave a little "Woo," so Melody is still a complete mystery.

Bevers wimped out on actually proposing (and used a lie about Abbi turning into a male as a distraction) — just like Broad City faked us out with so much Melody talk. Even when Abbi went to talk to Melody to make her feel better about Bevers not proposing (through a bathroom door), she was actually accidentally talking to Ilana and Lincoln as they got it on. (Apparently, the booze cruise was also a bone cruise with many of the partygoers having sex in the boat's nooks and crannies — the romance of the Statue of Liberty was just too much to handle.)

The show knows how they are teasing us about Abbi's faceless roommate with Abbi saying things like, "Where the f—k is Melody?" and "I did not talk to Melody. I have not seen her at all tonight." Jaimé even got me when he yelled out, "There she is!" But he was referring to the Statue of Liberty — not Melody.

So though Melody is a real person who likes to have sex with Bevers in a lifeboat, Broad City is going to continue the mystery of Abbi's true roommate. And at this point, I don't know if I want to see her. Although the show could get an amazing guest star to play her.