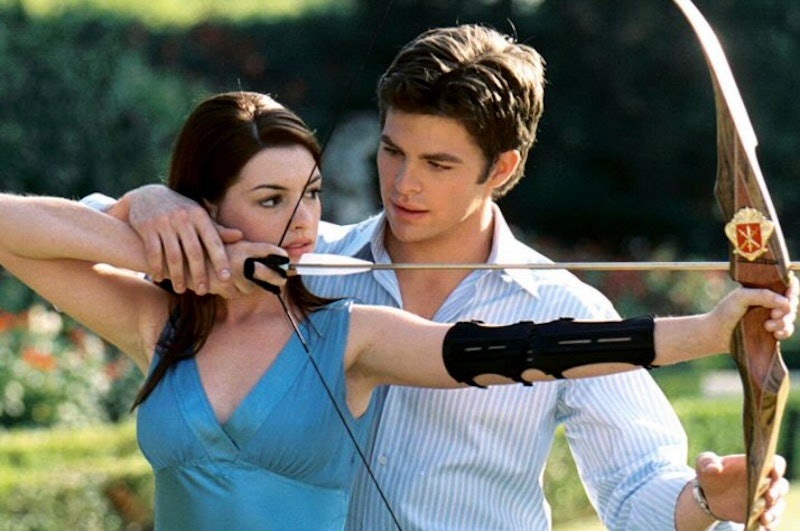 I have to admit, I must still have the Academy Awards on the brain. Last week, with Chris Pine's manly tears and the ageless effervescence of Julie Andrews, I was reminded of two things: the gloriousness that comes when we celebrate the years' best films, and the travesty that is The Princess Diaries 2: A Royal Engagement . Yes, both Pine and Andrews are in it, yes, it is a glaring zit on the face of cinema, and yes, it IS the subject of this week's bad movie re-watch.

Here's the basic plot: 21-year-old Mia Thermopolis (Anne Hathaway, pre-hatha-hated) is about to inherit the throne of Genovia, a land where everyone has distinctly different accents. Unfortunately, a princess cannot inherit the throne unless she's married, leaving the throne somehow open to dreamboat scumbag Lord Nicholas (Pine). Mia decides to enter an arranged marriage, but as the wedding approaches her and Lord Nicholas wrestle with their feelings for each other.

Why are we not rewatching the OG Princess Diaries, you may ask? In short: the sequel is too bad to pass up, the original is a cute children's film, and moreover the first Princess Diaries isn't streamable on Netflix. So.

Luckily they set it up nicely in case you're confused, and I'll recap what happened within that five year gap really quick:

Mia has graduated from Princeton University, and says good bye to close friends we won't see for the rest of the film.

How she got into and subsequently graduated Princeton by age 21 (really, 20) is unclear, since Mia's comically oversized glasses seemed the only marker of her intelligence. But then again, royals.

She once used to look like a troll, but got a makeover because princesses can't be ugly.

This isn't her, though, this is actually just a picture of me in sixth grade.

Her mother got married to her teacher and they're going to have a baby.

Weirdly that's like a trope in early 2000's media, maybe because parent-teacher conferences are like, speed-dating for divorcées.

She has a diary still.

And judging by the pages, has not written in it since the last movie.

In fact it's mostly just used to show what characters we've written out of the sequel.

And we're caught up.

Let's do this. Here's 18 ridiculous things from The Princess Diaries 2: Royal Engagement.

It made me think this was going to happen:

"Dearly beloved. We are gathered here today to get through this thing called life."

2. Clumsy use of Disney Channel alumni.

3. This guy's nephew is "eligible" to take the thrown. “My nephew’s mother was my wife’s sister,” he says.

Kind of a meaningless statement, because we don't know who his wife or wife's sister was. But assuming his nephew Nicholas is of a royal bloodline, wouldn't he be tangentially related to Mia, making their eventually courtship kind of incestuous?

But then again, royals.

4. This bodyguard intern/probable bass player for The Strokes, seems to have a thing for Queen Clarisse.

Get it, Mary Poppins.

Well, she SOUNDS Scottish, and she could be a Scotland reporter doing a series on Genovian royalty, but that doesn't really make sense and the accent is overall inconsistent.

Shooting a flaming arrow through a ring and...

Mia talks to a little orphan Carolina (baby Abigail Breslin) and declares that all girls will be Princesses today. Carolina she says, in an Italian accent, that she's "too little, too piccola." So wait, I always thought Genovia was a take on Monaco, what with earlier characters greeting with "Bonjour" and speaking French. But we have both Italian AND Scottish accents in the mix? Can this movie pick just ONE country to rip off and stick with it?

9. I honestly can't even enjoy this adorable moment now.

I don't even know where to begin. I guess we can point out that there are dozens of LITERAL CHILDREN attending, and then we can follow up that we're dolling out Minute Maid as a party drink. MINUTE MAID IS A DISAPPOINTING DRINK IN A 2ND GRADE LUNCH BOX, I'M ASSUMING IT'S EVEN MORE DISAPPOINTING IN A CASTLE.

12. "Mia, do something impulsive for once in your life, you're getting married."

"Definitely go off and have a midnight rendezvous with the guy who's trying to steal your throne when you're going to get married tomorrow to another man, there's no way that could go wrong.."

Lilly, if it isn't clear, is not my favorite film best friend.

13. So this G-rated affair happens.

Thanks for the advice, Lilly.

14. And then it becomes a worldwide royal scandal.

15. "Now, I'm your mother, it's your wedding day, I have to say something. Being married is about being yourself, only with someone else."

...What? That's it? This clearly emotionally unstable 21-year-old is about to rule a country, and her mom just spouted advice from the first inspirational quote she saw on Pinterest.

16. Unshockingly Mia does not get married, but Clarisse spontaneously marries her bodyguard, so whatever.

"I'm in love with the queen-to-be, and I'm inquiring if she loves me, too."

"Dear sir, you mistake me for a woman who would lower herself to the likes of your over-pomped hair and cartoon eyebrows. Unfortunately, now seated in my rightful place of power, I can only punish you for your attempts at deceit. You will be sent to the Genovian torture chamber, where you will be systematically flogged and beaten for the crimes you've attempted on my lineage. We will then follow up my coronation with a public execution, in which you will be made an example of to anyone who dares to cross my path. Mark my words, before this day is over, I will bathe in your blood."

It's a Disney film, you don't get killed unless you're someone's parent.

More like this
Anne Hathaway Shared A "Thrilling" 'Princess Diaries 3' Update
By Darshita Goyal
Jessica Simpson On The Time She Was Pursued By A Backstreet Boy & An *NSYNC Member
By The Editors
Your Guide To Watching 'Everything Everywhere All At Once' In The UK
By El Hunt and Sophie McEvoy
Taylor Lautner Copped To Finding Jacob "A Little Annoying" In Twilight
By Stephanie Topacio Long
Get Even More From Bustle — Sign Up For The Newsletter
From hair trends to relationship advice, our daily newsletter has everything you need to sound like a person who’s on TikTok, even if you aren’t.