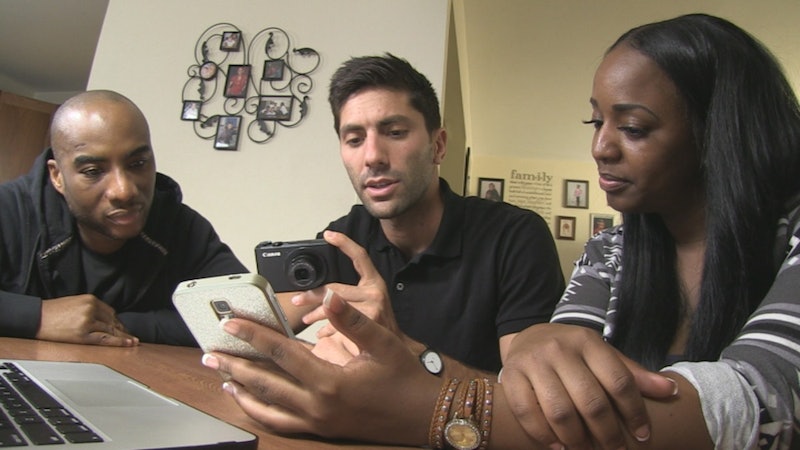 I thought three seasons in, Catfish had already shown us every possible twist on the "person on the internet pretending to be someone else" genre, but I was wrong. I was so wrong. Because on tonight's Catfish season 4 premiere, Nev (and this episode's cohost while Max is away, Charlamagne tha God) threw us a major curveball. It began like this: Miracle, like many of the people who enlist Catfish's help, wanted to find out if Jiovanni, the super cute music producer she's been talking to for the past year, is who he says he is. She legitimately thinks she could've found her husband, but first she needs to know the truth. And at first, the truth seems to be that she's actually talking to this guy named Rickie, who lives nearby and is nothing like Jiovanni. But quickly, it becomes evident that there's so much more than that going on beneath the surface.

Because when Nev, Miracle, and the Catfish crew show up to Rickie's house, Rickie insists they follow him inside. And that's where they find out that Miracle's actually been talking to a woman named Kara... and Rickie is her husband and has been in on the whole thing. Yep, a husband and wife catfishing team. How does this work? Why is her husband not only OK with his wife having an emotional affair but also assisting in her said emotional affair?

However, there is a reason behind all of this — Kara is suffering from Lupus, which means she's stuck inside all day and doesn't have much to do, so she gets a little bored. Kara, I'd like to introduce you to something called Netflix. Your boredom will be gone for the rest of your life, and it's a little less guilt-inducing than tricking total strangers into falling in love with you.

Ultimately, Kara apologized to Miracle, even though Miracle (understandably) wasn't in the mood to hear her out. And at least she took the whole thing with a good sense of humor and left the window open for a possible friendship in the future. All's well that ends well, right?

However, I do miss Max in ridiculous amounts. Is it time for him to come back yet?