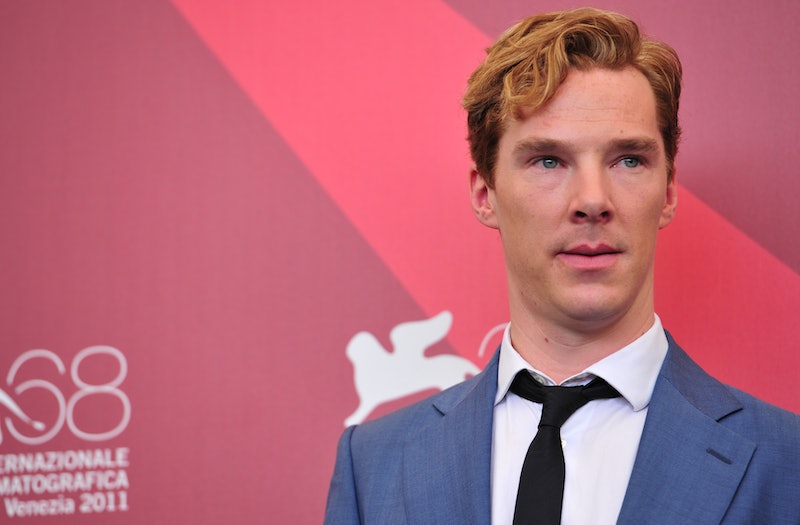 If you didn't love the Sherlock star enough already, prepare to fall for him even more. Benedict Cumberbatch wrote a note for a fan to be read at her funeral, and it is seriously the sweetest ever. Eve Shepherd was 14 years old when she passed away from complications stemming from her premature birth. She wasn't expected to survive a day, and she ended up living for 14 years. Her family says their daughter was a huge fan of Cumberbatch and his BBC show, and while Cumberbatch was unable to attend her funeral, he sent a thoughtful apology note to commemorate the young fan.

The note was read during the funeral, which The Independent reports was attended by guests wearing signature Sherlock Holmes deerstalker hats. It's an incredibly nice note, and I'm sure it was a great comfort to her family on that sad day. But this isn't the only time Cumberbatch has tapped into his sensitive side to do something thoughtful. Here are nine other touching Cumberbatch moments.

When He Stood Up For Keira Knightley

When He Didn't Like The Cumberbitches For A Very Feminist Reason

"Give yourself more power as women. Don’t just call yourself bitches... I think it sets feminism back so many notches. You are… Cumberpeople," he's said of his fandom.

Every Time He's Talked About Wanting To Have A Child

"I can’t wait to do an interview like this and just talk about my child," he once sweetly told the Radio Times. I'm glad he gets to be a dad soon because he's wanted this for years.

When He Destroyed the "Boys Shouldn't Cry" Stereotype

Emotions are for every gender.

When He Talks About How Much He Loves His Wife

I can't even be mad that he's taken, because he's clearly just so happy.

When He Defended Gay Rights

He even recently teamed up with Stephen Fry to get the British government to officially pardon all the people they jailed under the old "anti-gay" law. He's a huge supporter of the LGBT community, saying he'd defend their rights to the death.

When He Praised Tom Hiddleston's Talents

Cumberbatch saw what the world had yet to see, and wanted to make sure we all knew how great Hiddles was.

When He Sent A Note To His Fans

Last Christmas, Cumberbatch thanked fans who donated to charity in his honor, and reminded us the true spirit of the holiday.

I'm so lucky to have such supportive and generous fans. Nothing would make me happier though than for their love, time, effort and money to be channeled towards people who are really in need at Christmas. Homeless charities, humanitarian organizations and human rights charities all deserve our support. If that seems too impersonal for you or you don't have any money to give please just do someone a favor who needs it or who you love as that's the best Christmas present I could ever think of having. Goodwill to all!

He just has a way with words that melt your heart.

When War Horse Got To Him

Cumberbatch's calvary charge scene almost made him cry with the intensity of the emotions, and the weight of this historical battle on his shoulders. "The third [take] I was an emotional wreck. I had to really try hard not to cry," he admitted.

Don't worry, Benedict. I, too, have to try really hard not to cry because of all the sweet things you do.