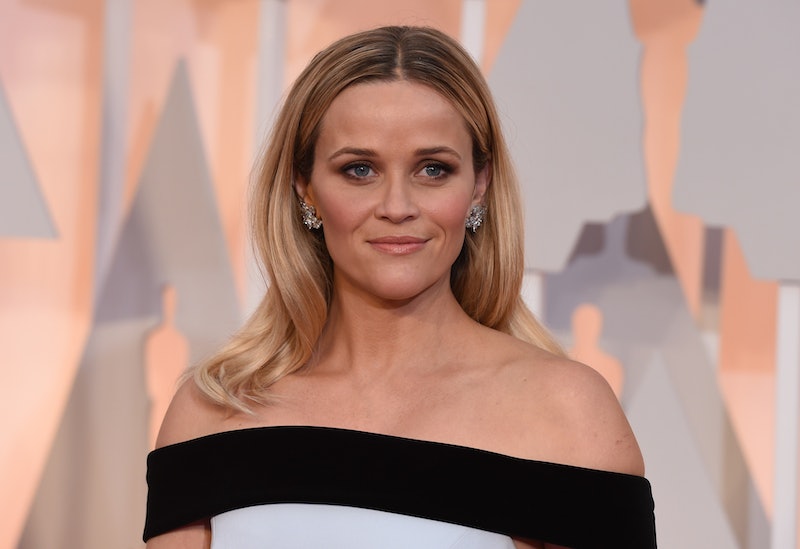 When my friend came over on Sunday night to celebrate what she and I believe to be the best night of the year (at least one of them), her first remark post-salutations was, “You have to see Reese Witherspoon, she has a really bold middle part.” Yes, we’re talking about Reese's look at the 2015 Oscars, and if there’s one thing that stood out on the red carpet, it was definitely her hair part. I loved it. My friend love it. And ultimately, it did great things for middle part fans all around.

I may be on the side of unpopular opinion, here, and I acknowledge that hair parts are of a most subjective topical variety, but middle parts are a tricky thing. Either you rock the middle part so well that you’re able to trick people into thinking you were born with a part down the center of your skull (and hair long enough to do so), or the style looks unnatural and awkward — very Alfalfa-like, if you will. Witherspoon, however, took the middle part all the way home by also donning its complementary hairstyle — the intentional behind-the-ear tuck. The combination made for a very classically beautiful 'do that is precarious for non-red carpet strutters to sport.

Historically speaking, I come from the side part camp, but in recent years my part has gone from combover central to a near-center part. I know this to be a truth (not universally known — only evident to myself) because I discovered last week that my sister keeps a copy of my high school senior portrait in her wallet, and the picture reveals a blatant combover. There is nothing natural about the way my hair falls from my head in that photo. But it was 2009 and everything was sideways — when my hair wasn’t flat-ironed to a fault it was in a puffy “skunk-like” (as a frenemy once described it) side ponytail.

I made a conscious decision to retire the combover during my freshman year of college after seeing a “born-with-a-middle-part” classmate wear it so flawlessly. She had naturally straight, artificially blonde hair; I have naturally curly-frizzy black hair, so it was a doomed effort from the start. After creepily admiring her hair one night while brushing our teeth in the dorm bathroom, I thought I’d give it a whirl. I woke up the next morning, took a comb down the center of my head, and voilà, center part. It was a feeling similar to what you get the first time you show off bare legs in the spring. Your legs are pale and pasty, and you feel like everyone notices all of the weird bruises that have somehow appeared on your newly-shaved calves. It would take some time for me and my new hair part to get acclimated to each other, especially due to the fact that the longevity of my earlier side part had left the right side of my head with considerable more volume than the left.

I wore the part a few times, and nobody noticed except a likeminded friend who was also in the business of changing hair parts. The middle part felt too harsh for my head, and I decided a less drastic, more physically attractive, way to shift towards the center was a gradual move. I re-parted my hair down the side, but a half-inch closer to the center than my combover look had warranted.

I admit that aside from the pretty blonde girl in my dorm, another driving factor in my decision to go down the middle had to do with the Kardashians, as most beauty trends worth trying do. If you’ve ever sat through enough Keeping Up With the Kardashians (and its spin-offs) marathons, then you’ll notice the extent to which the sisters wear middle parts, especially in their confessionals. Before the Kylie Jenner lip pout, there was the Khloe Kardashian middle part. It was a bold cut with angles that framed her face and curling-iron shaped waves. It didn’t exude the same sense of classic, symmetrical beauty that Reese Witherspoon’s did, but it was worth imitating for kicks.

I’ll spare the boring details of how I’ve gone from somewhat to full-blown center part between 2010 and now, but when not inspired by a Kardashian, I think my gradual shift is indicative of larger beauty and fashion trends.

At least on the red carpet, a side part and the slicked back hair or bouncy waves that often accompany it exudes a certain old-school Hollywood glamour (think Emma Stone and Margot Robbie from this year’s Oscars). It’s no doubt a pretty, bombshell-beauty look, but also very done up. The middle part, on the other hand, suggests a lower level of maintenance. Off the red carpet, this translates to the popularity of effortless, natural beauty trends. Though it isn’t natural for me, the middle part is for many women, and as a result, appeals to a “I woke up like this, no effort, no fuss” look. It also seems right at the moment to wear a neat, Ali MacGraw-in-Love-Story center part now that the fashion industry gods have deemed the 70s the decade worth recreating. I can only hope that Farah Fawcett’s feathered hair will be the next iteration of 70s beauty worth trying.

More like this
Florence Pugh’s Flipped Bob Is Giving ’60s Bombshell
By Olivia Rose Ferreiro
Not Sure How To Style Bangs? Make These Easy Hairstyles Your Go-To
By Olivia Rose Ferreiro
This Week’s New Makeup Releases & More Beauty Headlines
By Audrey Noble
7 Hair Color Trends Of 2023 That'll Inspire Your Next Dye Job
By Jordan Murray
Get Even More From Bustle — Sign Up For The Newsletter