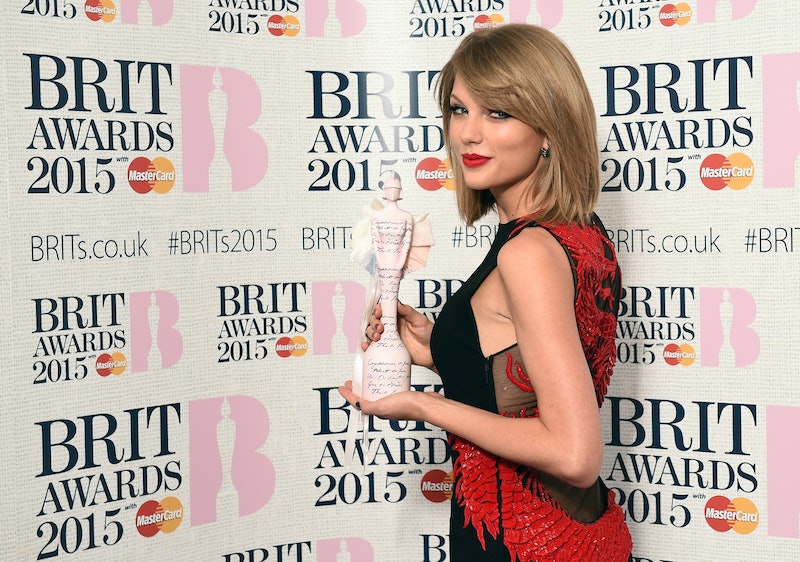 I did not watch the 2015 BRIT Awards, but from what I’ve read on the interwebs, it looks like Kanye West, in true Kanye West style, stole the show. No, he didn’t rush the stage in the middle of an unsuspecting artist’s acceptance speech (well, as far as I know, he didn’t. I could be mistaken, but if that had happened, I assume it would be all over Twitter). Mr. West Mr. West Mr. West [fades out] debuted “All Day”. The performance brought the heat, literally and figuratively. So much so, noted awards show crowd dancer Taylor Swift was moved to move around the entire time.

I am not a body language expert or a facial expression expert, but I did take dance for years. As anyone who has seen a So You Think You Can Dance routine by Nappytabs or Mia Michaels knows, dance can communicate. Dance can tell a story. Though I cannot do fouette turns anymore, I remain fluent in dancespeak. I can interpret a routine.

With that said, I interpreted T. Swift's dancing. Here is the story told by T. Swift's moves:

She is transfixed by the gigantic flamethrower. She knows she shouldn't look directly into the flame, but she cannot help herself. She stares:

The subtle change in her eyes and mouth suggests she's reacting to something crazy that just happened. She must've looked at the flame so long that she started seeing things. She sees a falcon soaring in and around the flame:

"Did y'all see that falcon or what?"

The falcon has become too much for T. Swift. She has to turn away:

She stares at a gum wrapper. Anything to take her mind off the flamethrower falcon:

She turns back toward the stage, but she will not open her eyes. She will not look at the flamethrower:

She feels tempted to look at the flamethrower again, like a Swiftmoth to a flame. She turns away again:

She turns back toward the stage. She can feel the heat of the flame. But she will not look. She tries to warn Kim, but it's too late. The flamethrower falcon has Kim in its talons: