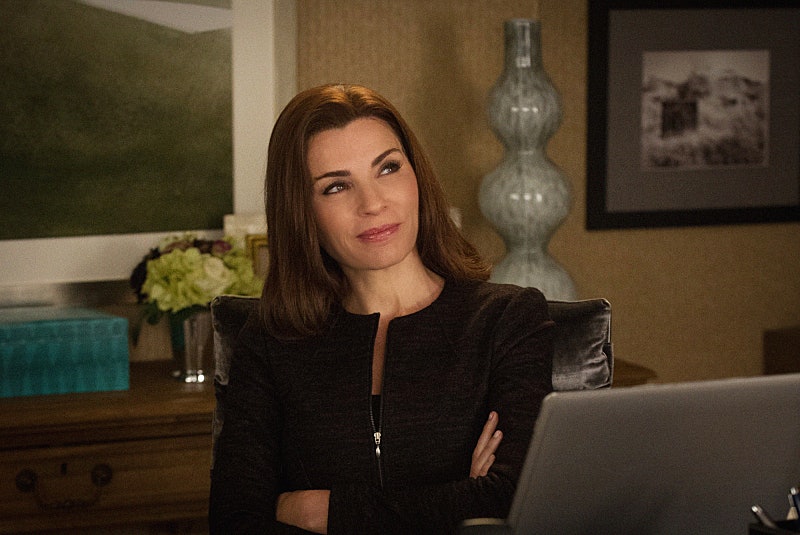 It is amazing to think of how much The Good Wife and it's leading lady, Alicia Florrick, played marvelously by Julianna Marguiles, have changed in six seasons. While I feel Season 5 was stellar mixing in the heartbreak of Will Gardner dying to Alicia and Cary starting a new chapter of their professional lives, I feel that Season 6 has been kind of a mess. Main characters don't interact with each other, the State's Attorney race is dominating all the plot lines, and I'm really starting to doubt where the writers are going. For a while I considered The Good Wife one of the best shows on televisions but now I am trying to decide if I am even going to continue watching the show. This makes it the perfect time to look back at The Good Wife's pilot episode.

The Good Wife has always been a show that plays around with feminist themes. But there are many things that have changed quite dramatically since Season 1 with the most major example being Alicia Florrick and her own morality. Rewatching the pilot definitely made me long for the days when the plot of The Good Wife was a bit more cohesive and main characters interacted in meaningful ways. Here's a list of 10 things from The Good Wife pilot that you never noticed and probably makes you miss the early seasons.

It's hard to imagine anyone else playing Alicia Florrick but in this Hollywood Reporter roundtable Julianna Marguiles said she wasn't even the second choice. Marguiles mentions the two front runners at the 38 minute mark of the interview.

Remember when Alicia and Kalinda used to actually talk to each other? Remember how integral Diane was to the plot? Those were the good ol' days.

The Show Had a Clear Focus

It's hard to remember how simple The Good Wife used to be thanks to the mess of Season 6 with the State's Attorney race Alicia is campaigning for. But the pilot demonstrated an ability to balance emotional and narrative arcs without forgetting character development. It was a story about a woman picking up the pieces of her life in the wake of a scandal and trying to redefine her own identity.

Cary Agos Was a Bit of a Jerk

In Season 1, Cary Agos was every entitled white boy you remember annoying you in college (and life in general). The kind of guy that expects everything to go his way. Thankfully the show has added many more layers to the character and he's even become one of my favorites.

'The Good Wife' Has Always Been Interested In Feminist Themes

While I have issues with the way women of color are treated on the show, I can't deny the show has always been interested in feminist themes. The entire premise hinges upon taking the kind of woman that seems like a footnote (the wife of a disgraced politician who still stands by her husband's side) and making her into a fully fleshed out human being. What does it mean to be a modern woman? How do you balance your own desires with the needs of your family? What does having it all as a woman even mean? These are all questions that The Good Wife touched on in the pilot that continue to resonate on the show today.

As terrible as the writing has been for Kalinda Sharma for the past few seasons one thing has stayed consistent: her amazing wardrobe. Kalinda has a very specific look including amazing leather jackets, well tailored dresses, and knee high boots. Rewatching the pilot, Kalinda's look lacks the iconic pieces we associate with the character. The leather jacket/boots combo doesn't become apparent until Season 2.

Sometimes I forget about Alicia's kids in the most recent season. But in the pilot there place in her life greatly affected the shape of her character and how she approached the new chapter in her life. Yes, they're older now and Zach's in college but you would think they would factor more in Season 6 since she's running for a political office.

Alicia Should Have Left Peter When She Had the Chance

Seriously, why is she still with this guy? She could have easily divorced him in Season 1. But she was a very different character at the start of the show and put the desires of her kids before her own. At this point, he needs her more than she needs him. Come on, Alicia! Leave him already.

Alicia Florrick dealing with Peter's exposed cheating and the seismic shifts it caused in her own life seems almost simpler than how the show is avoiding Alicia's romantic desires during Season 6. Before it was Alicia trying to decide between Will and Peter. Now she's having daydreams about Jonathan Elfman and Finn Polmar. Unfortunately, most of Alicia's romantic life seems to exist in her head.

Ever since the beginning of The Good Wife Alicia Florrick has a hard time articulating what she wants and truly going after it. In Season 1 it was wrestling with her sometimes conflicting desires about being a lawyer again and staying married to Peter. In Season 6 Alicia running for State's Attorney doesn't really align with what we know of the character and she has yet to confront a lot of the issues in her personal life. Alicia Florrick has dramatically changed as a character but she still doesn't seem to be honest with herself abotut what she wants. Will The Good Wife finally give audience's an answer to what Alicia Florrick really wants? We'll have to continue watching Season 6 to find out.