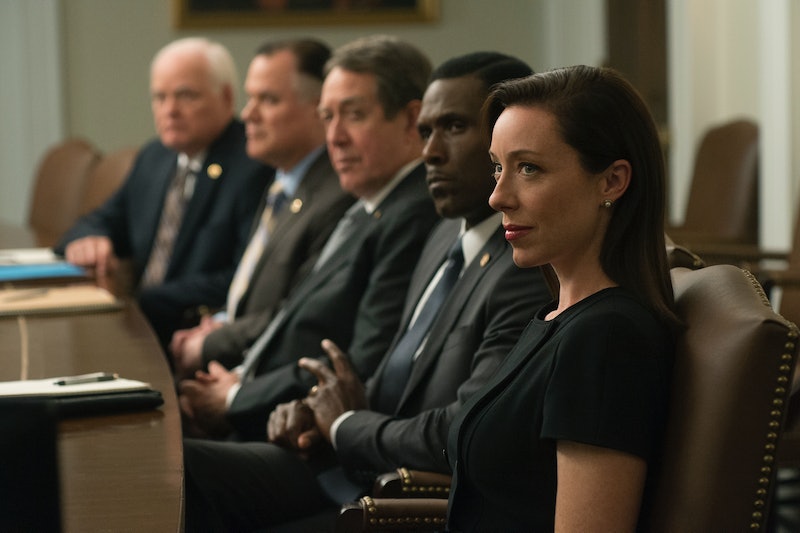 House of Cards does not shy away from strong women — and Season 3 is continuing that tradition. The only problem is that both Claire and Jackie are dependent on Frank for political success, which is not really a good thing. Jackie is not pleased that she whipped the votes for President Walker's impeachment and has not reaped any benefits from Frank being the President. And Claire did not get the Senate's support for the role of ambassador to U.N., so she asked Frank to appoint her when the Senate goes on recess.

While Claire seems to be taking on characteristics of Frank with her knuckle tapping (I even thought for a moment she may even directly speak to the camera!), she undermined her own nomination when she cracked under pressure during a Senate hearing (I guess that's kind of like Frank too). With Claire sitting in a room choosing the colors of commemorative eggs as first lady and finding out that she lost the ambassador role by 52 to 48 votes, it showed how unfulfilling Claire finds her role as first lady (with pressure to select the neon pink egg). She played her rejection cool by saying, "I look forward to continued service as first lady." But Claire is not going to take that sitting down.

Claire showed she will not be choosing egg colors for the rest of her life by the end of "Chapter 28" when she (literally) fried some eggs up after requesting the Frank makes a "recess appointment after a rejected nomination." Because like Paula Cole, Claire is done with waiting as she told Frank, "What if it's all over in 18 months? I don't want to wait or settle for something else ..."

Jackie was also making a power play — for the role of vice president. Frank appointed Congressman Blythe to the role, but Jackie thinks she earned it and tells Remy so (who is now Frank's chief of staff) when she said, "I want to be on the ticket — his V.P."

It's obvious that Frank is going to blow off her request, and she gets reporter Ayla to start digging to discover that the Democrats don't want to endorse Frank for president in 2016. (Frank did announce in a speech that he's not seeking the "Democratic nomination for 2016" for President — sure, sure.)As Frank scrambles for his own power, I don't like the fact that these two women need to come to him to increase their success. But I have faith they'll find a way to succeed — with or without Frank.