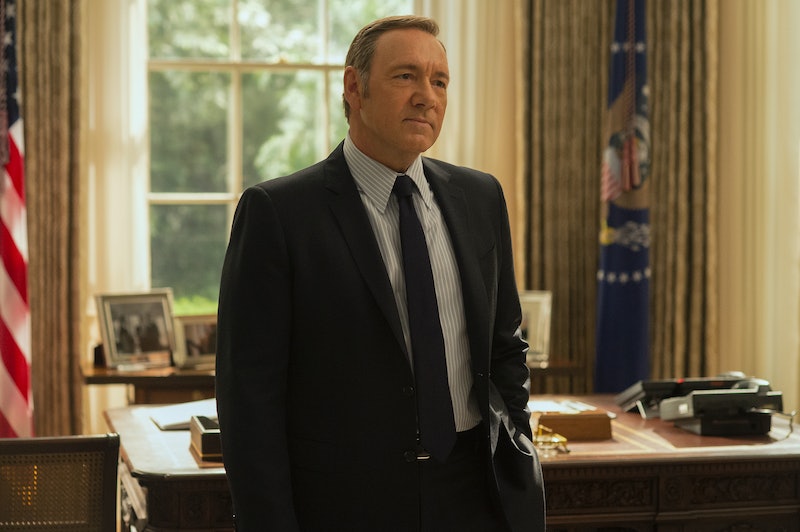 Season 3 of House of Cards has been mirroring our real-life world very closely — and just like real politicians, Frank Underwood has been avoiding speaking out about certain issues. So what is Frank's stance on gay rights on House of Cards ? The gay rights issue has been in the news in the world of House of Cards mainly due to American activist Michael Corrigan being arrested overseas by Russia for advocating for LGBT rights on the show. He had been seen leading a protest in "Chapter 29" when the fake Russian President Viktor Petrov on House of Cards visited the White House. Petrov evidently has similar views on gay rights to real Russian President Vladimir Putin.

Frank wasn't really making any effort to free Michael Corrigan, so Corrigan's husband, John Pasternak, started supporting (and touring with) presidential candidate Heather Dunbar. Meredith Vieira (another great news cameo after Stephen Colbert had one in the first episode of Season 3) asked Dunbar if supporting Corrigan and Pasternak would hurt her chances of being President. And Dunbar's response really does make me want to vote for her: "I think the American people want a candidate who doesn't dodge, who is truthful about where she stands. Not someone who shies away from controversy."

This was in direct response to Frank shying away about gay rights. Journalist Ayla responded to Frank's indirectness in "Chapter 30" during a press conference by saying, "Isn't dodging gay rights a calculated move for a man not running for office?" (I have been loving all of these people calling out Frank on his BS in Season 3.) Frank's response? Still pretty dodgy:

"Gay people have rights. And this administration has always believed that Mr. Corrigan has the right to speak his mind — without fear of being arrested — on any issue whether it's gay rights or something else."

What makes Frank's lack of stance on gay rights more interesting than any other politician in real life dodging the question is the fact that us House of Cards fans know for a fact that Frank is bisexual. But he is too concerned about politics to ever reveal that (oh, how amazing would it be if he did — it's not unheard of). Eventually, Claire (as the U.S. ambassador for the U.N.) used Corrigan's freedom as a power play. But that had nothing to do with what President Underwood thinks about gay rights. Frank doesn't care about equality unless it will benefit him politically — and his own sexual identity has nothing to do with it.