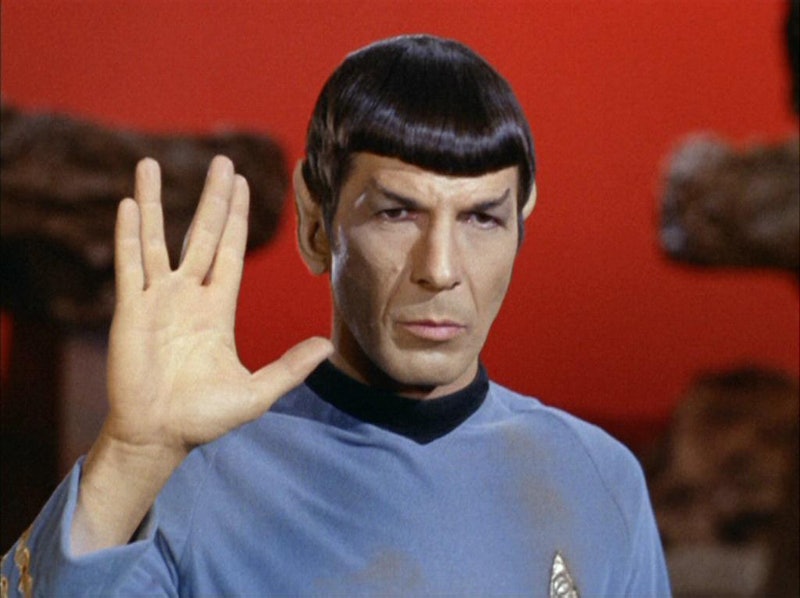 The sad news broke today that actor Leonard Nimoy had died from chronic obstructive pulmonary disease at the age of 83. Aside from his career as a film director and writer, Nimoy was incredibly well known for his iconic role in the Star Trek series as Spock, the half-Vulcan, half-human Starfleet officer of the starship USS Enterprise.

Within the world of die-hard Trekkies, the Vulcan race is associated with the famous Vulcan salute followed by the phrase "live long and prosper," but did you know that this landmark in Star Trek history was actually put in place by none other than Nimoy himself? It's true.

Born of two Jewish migrant parents, Nimoy was long active in the Jewish community growing up. He could speak and read Yiddish and often went to synagogue with his family. Little did Nimoy know that this Jewish heritage would reflect his character's heritage later on in life.

Nimoy recalled one time when he went to synagogue with his family, five or six guys got on the bema (the stage) facing the congregation. They put their tallits over their heads and started chanting. His father told them not to look and cover their eyes, but Nimoy peeked. And when he did, he discovered something rather interesting.

The men were making a gesture with their hands in the shape of the letter "shin" in Hebrew alphabet, which is the first letter of the word Shaddai, Shalom, and Shekhinah, (the feminine aspect of God). It's a holy gesture, as legend has it: during this time the Shekhinah comes into the sanctuary to bless the congregation.

When Nimoy was filming "A Mock Time," his character Spock had to return home to fulfill a marriage proposal. Since this was the first appearance of Spock's people, Nimoy thought it might be interesting to give them a special greeting. When the director agreed, Nimoy said it wasn't long before people were copying the gesture. But little do people know, they're actually blessing each other each time they do the Vulcan salute.

Check out the full story in the video below: