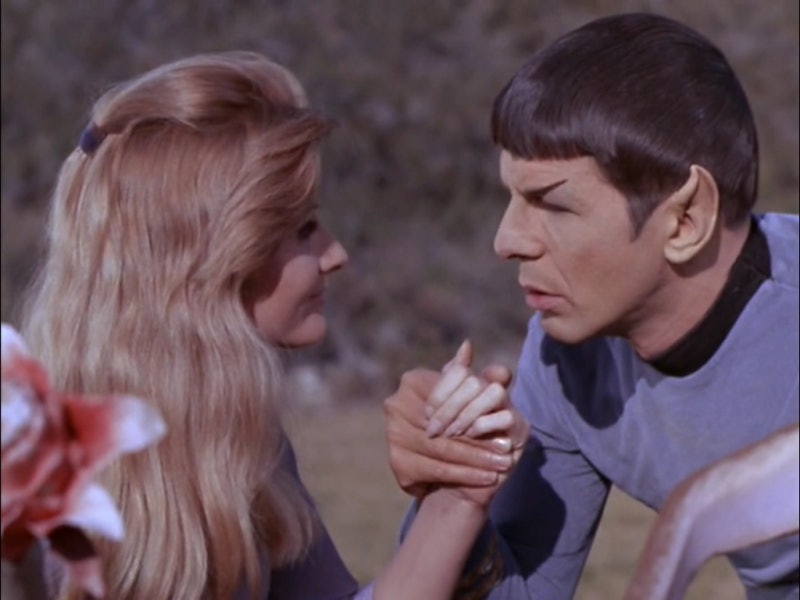 When a star passes away, fans typically choose to revisit his/her best work — yet when an actor was as talented and prolific as Leonard Nimoy, deciding on just one great clip to re-watch is practically impossible. Though the icon, who passed away Friday at the age of 83, was best known for playing Spock on Star Trek, he also found major success through hosting In Search of..., guest-starring on Fringe, and directing 1987's hit Three Men and a Baby, among other ventures. In a career that spanned decades, the man never wasted a minute.

Yet if you had to choose a favorite moment from his work, it'd most likely be something he, as Spock, did on Star Trek. After all, the role not only brought Nimoy fame, but, due in large part to his performance, became one of the most iconic characters in television history. There are hundreds of great moments to choose from his time as Spock, but perhaps none have stayed as watchable, moving, and relevant as the scene from season 1's "This Side of Paradise," when Spock confronts his feelings towards Leila, the human botanist he previously met on Earth and who's just professed her love.

It's an incredible clip, one that highlights both the sharpness of the show's writing and Nimoy's affecting performance as Spock. And, with the news of the actor's death, it's a comfort to watch; hearing Nimoy speak of "self-made purgatories" is depressing, yes, but it's also a remarkable statement about human (or half-human) life, one that fans of the star should certainly take away.

Watch the moving clip, below, in memory of the beloved actor: