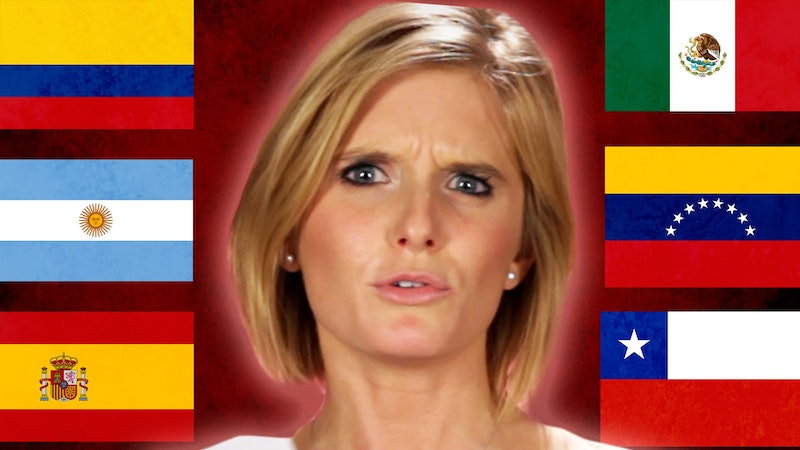 Why are videos of people horribly mispronouncing foreign words so funny? We have seen it before, with Americans hilariously butchering bizarrely spelled British place names, and now a new video shows Americans attempting and failing miserably to say names originating in Latin America. In the Buzzfeed-produced video, five verbally challenged, non-Spanish speaking Americans struggle to pronounce the last names of politicians, athletes, filmmakers, and actors from Mexico, Uruguay, and Colombia. They are particularly uncomfortable with these names’ rolled “Rs,” the “eñe” sound (produced by this letter: Ñ), and any letter with an accent on it.

Some of these names certainly seem more difficult than others (I’ll give you Aguirregaray, but come on, is “Peña Nieto” really that hard?); then again, these might be the same people who pronounce “jalapeño” with a hard “j” at the beginning. (I can be smug about that because I am from Texas, where we know how to say “jalapeño.”) It’s important to know that plenty of Americans can pronounce these names: according to the Pew Research Center, 37.6 million Americans over the age of 5 speak Spanish at home, making the United States the fifth largest Spanish-speaking nation in the world.

More like this
10 Thanksgiving Alternatives You Can Celebrate This Month
By Katie Mitchell
Iran Has Issued A Death Sentence Over Mahsa Amini Protests
By Catharina Cheung, Darshita Goyal and Maxine Harrison
Read Dan Levy's Heartbreaking Message After The Club Q Shooting
By Stephanie Topacio Long
Ayurvedic Principles & Family Are At The Root Of Fable & Mane
By Justine Knight
Get Even More From Bustle — Sign Up For The Newsletter