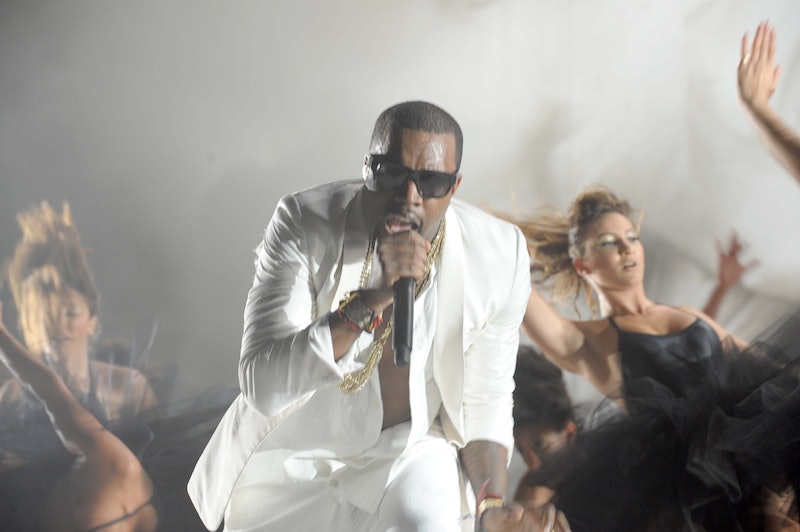 On Monday Afternoon, a new track by Kanye West titled "All Day" dropped on the Internet and, unsurprisingly, it promptly ended up everywhere. Aside from the song being highly NSFW, "All Day" raised a lot of questions in terms of — well — what the song actually meant. The majority of the song feels like an attack or a challenge to another celeb, but who those daggers are aimed towards have yet to be revealed. Though there are a few theories that are quite possible, until West puts it out there in his own words, we'll never truly know. That said, we all know Kanye West isn't one to hide from a feud (in fact, he seems to relish in them), so I have a feeling we'll know sooner rather than later who West is calling out in the song.

"All Day" will appear on the upcoming "surprise" album, So Help Me God. The track was first premiered at the BRIT Awards, where West took the stage and aggressively blew the roof off of the place. Though when and how the album will be released is, as aforementioned, a "surprise," we already have album art and a handful of tracks courtesy of Kanye West and co. With all of this build up, So Help Me God will need to deliver in a big way. (But then again, it's Kanye West, of course he'll do it up in a big, big way.)

Though it has been unveiled that Sir Paul McCartney is the one whistling at the end of the tune, the subject of "All Day" has yet to be revealed. Let's speculate, shall we?

Though West has given praise to the Canadian rapper for being the most popular man in hip-hop, they come across as veiled insults. Last night, during a surprise visit to Oxford University West commented,

I think that progression of mind with the advent of a human being named Drake (laughs, smirks, crowd laughs) you know, this idea of holding onto a number 1 spot. And then you get this guy that comes and blows out the water every number 1 of any band ever. Be it me, or Paul McCartney [laughs].

West admits Drake's popularity, but not his artistic quality. Perhaps all of those lyrics in the song about shopping malls and being an actor who should be on Broadway are directed towards West's number one competitor. Though it would be an awkward time with the Kardashian/Jenner clan, since Drake is friends with Kendall Jenner.

This one might seem like a bit of a stretch, but it's not impossible. There's Kanye West the celebrity and Kanye West the artist. Which one is the performance vs. which one is the real Kanye has yet to be determined. In fact, I'd say both are so intertwined at this point that they may have just formed one mega-Kanye. In any case, before Kanye became the guy who ruined speeches and reveled in reality TV fame, he used his status and his ego to make a statement about race, class, and politics. If Kanye West is getting back to that kind of work, then "All Day" could be Kanye calling out how he's perceived. Hate on haters, Kanye's gonna keep doing Kanye. And ruining speeches.

Before Wiz Khalifa and his ex-wife Amber Rose met, she was with Kanye West. Rose, it should be mentioned, is releasing a tell-all memoir will most certainly detail her relationship with both rappers — the good, the bad, and the kinky. "All Day" might be a preemptive dig on Khalifa and Rose.

Everyone He's Ever Had a Feud With

From Taylor Swift to Louis Vuitton, the list goes on and on.

More like this
Kim Kardashian Pays Homage To Kanye West’s Fave Film In New Swimwear Pics
By Bustle Editors and Maxine Harrison
Kanye West Has The Most Kanye Reaction To Kim Kardashian & Pete Davidson's Split
By Jake Viswanath
Are John Legend & Kanye West Still Friends? The Singer’s Latest Update Is Candid
By Brad Witter
Taylor Swift & Her Mom Clap Back Against The “Shake It Off” Plagiarism Lawsuit
By Jake Viswanath
Get Even More From Bustle — Sign Up For The Newsletter