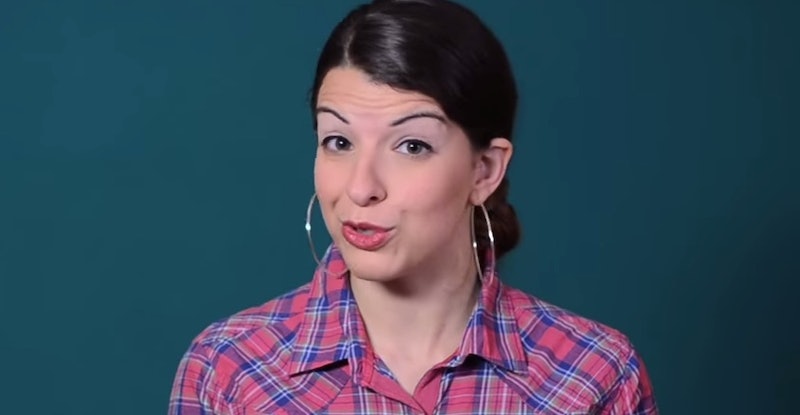 If you're surprised to hear that GamerGate is still going on — it's been months on months now, all sound and fury with perilously little sense — it's probably best to buckle yourself in for this one. But don't worry, this time it's actually good news! Assuming you have that natural human taste for a little schadenfreude now and again. Basically, it's becoming apparent that GamerGate's anti-Anita Sarkeesian documentary is falling apart in spectacular fashion, with its conspiracy-theorist creators Jordan Owen and Davis Aurini having now turned on one another.

It's important to remember that the nakedly sexist hatred and harassment in some corners of the gaming community weren't a new phenomenon when GamerGate emerged last year. In fact, quite the contrary — Sarkeesian had been the target of vile online abuse and a ceaseless din of inane criticism for nearly two years prior, thanks to her entirely reasonable and super-watchable "Tropes vs. Women in Video Games" YouTube series. By the time August rolled around, with the burgeoning winds of GamerGate at their backs, the Owen/Aurini duo clearly thought they had some momentum on their side. They announced they'd be making a documentary — a "serious work of investigative journalism," Aurini insisted — called "The Sarkeesian Effect."

But now, the foundations are crumbling, with Owen and Aurini publicly sniping at one another over the project's funds, and each other's continued involvement.

Given the pair's stated views on Sarkeesian and feminism writ large, it wasn't hard to guess the angle they'd be coming from. Owen, in particular, has carved out a prominent space among the throng of YouTubers railing against Sarkeesian — he's the guy she called out in her XOXO talk last year, dubbing him "an obsessive fellow fond of ranting into his webcam while sporting a bathrobe." (In the interests of full disclosure, he also once engaged in a YouTube debate against my brother. My obvious biases notwithstanding, he didn't fare too well.)

Aurini, on the other hand, is a relatively well-known YouTube faux-intellectual, whose work broaches such touchy issues as why modern women are "the most decadent sluts since the fall of Rome," (cuz he says so!) and "why blacks fail" (cuz he's a racist!). While they seemed to have sympathetic views at the time on Sarkeesian at least, clearly it wasn't meant to be — Owen now alleges that Aurini demanded half of the project's remaining funds (donations, mind you) to walk away quietly, while Aurini insists that Owen's discomfort with Roosh V, a prominent "men's rights activist" and rape apologist, was to blame.

Whatever the reasons, however, this news brings an almost ethereal level of irony. Amid all the inane criticisms Sarkeesian has had to deal with since launching her series, the amount of money she received from her backers has been a constant line of attack. "She's a con artist," they said. "She got all that money just to make YouTube videos!" Setting aside that the series has thrust sexist tropes in games squarely into the spotlight, an undeniable success, and that complaints from her actual supporters seem few and far between, it now appears that the people who put their trust in Owen and Aurini stand to lose out.

More like this
Amanda Gorman Shared A Powerful Message On Meghan Markle’s Penultimate Podcast
By Darshita Goyal
The David Beckham Qatar Controversy, Explained
By Sophie McEvoy
MOBO Awards Found Kanya King On The Woman Whose Grit & Determination Spur Her On
By Kanya King
Here's The Role Lady Susan Hussey Played At Buckingham Palace
By El Hunt
Get Even More From Bustle — Sign Up For The Newsletter