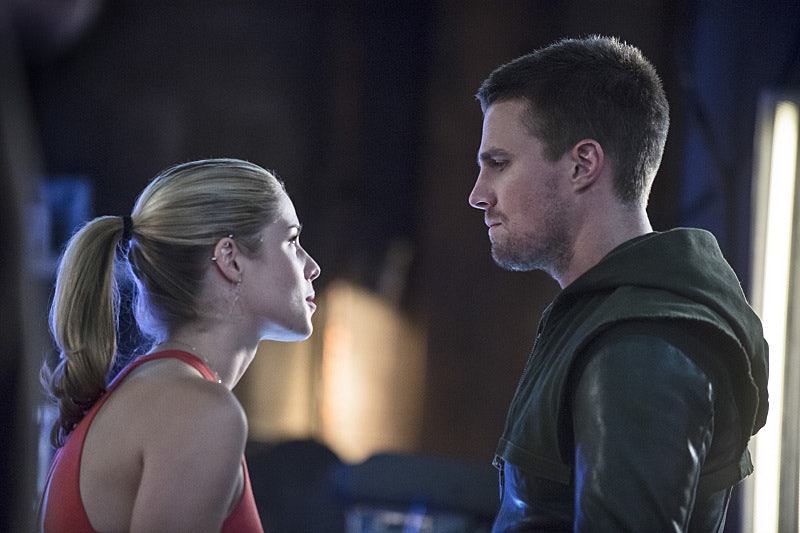 To say it's been a difficult year for Olicity fans would be a bit of an understatement. Not only did this Arrow duo's first date end with a bang (and not the good kind), but another handsome vigilante-esque billionaire came into the picture, pulling Oliver and Felicity even further away than they already were. Basically, we've gone in the exact opposite direction that we wanted to (though I have to admit, Raylicity is not without its charms). But any diehard Olicity fan knows that now is not the time to give up. Because these two are bound to eventually find their way back to each other. The bigger question is just when. When will Oliver and Felicity get together for real this time? And I'm willing to bet, right here and now, that it'll be no later than the Arrow Season 3 finale.

What makes me so confident, you may wonder? Well, a lot of it has to do with the fact that there's an Arrow and Flash spinoff in the works, which will star Brandon Routh, who plays Ray Palmer (aka Felicity's current love interest; aka the main obstacle standing between an Oliver and Felicity reconciliation). Basically, this new gig guarantees that Ray won't be sticking around for much longer, and we all know that once a character leaves to go to another show, it becomes very hard to keep any sort of continued romance afloat. (As a dedicated Klaroline fan, trust me, I know what I'm talking about.) So if Ray is going to eventually be out of the picture, that leaves Oliver with the perfect opportunity to swoop in.

As of now it's hard to pinpoint when precisely this spark will reignite. (You can't put a time constraint on true love, you guys.) However, since I'm almost positive the spin-off will play a key role in the decision, it would more than likely be right around Ray's eminent departure, which would logically come at the end of this season. (The new project is said to be "eyed for next season," meaning it could debut as early as next fall!) Because, let's be honest, folks — Ray and Felicity aren't breaking up unless they absolutely have to.

Throughout the course of Season 3, we've seen these two grow closer and closer. And now that they've slept together, their feelings toward each other are bound to only get stronger. But, in all honesty, that's a good thing and something our Miss Smoak desperately needed. Despite how much I've supported Team Olicity, I also haven't been shy to admit that Ray has certainly been treating Felicity better than Oliver has these days — even going so far as to call Raylicity the ideal Arrow couple (for now, at least). So it's highly doubtful that a split would happen unless one of them was moving away.

This spinoff is just the opportunity Olicity needs to make a comeback. Oliver could comfort a heartbroken Felicity over her break up… one thing could lead to the other and BAM — they're both once again plucked by Cupid's arrow. I suppose Ray and Felicity could try to make it work long distance at first, which could postpone an Olicity reunion until sometime next fall. But that's the worst case scenario here. So regardless of the exact point in time Olicity starts heating up again, just rest assured that it will happen. Their love story is still far from over.