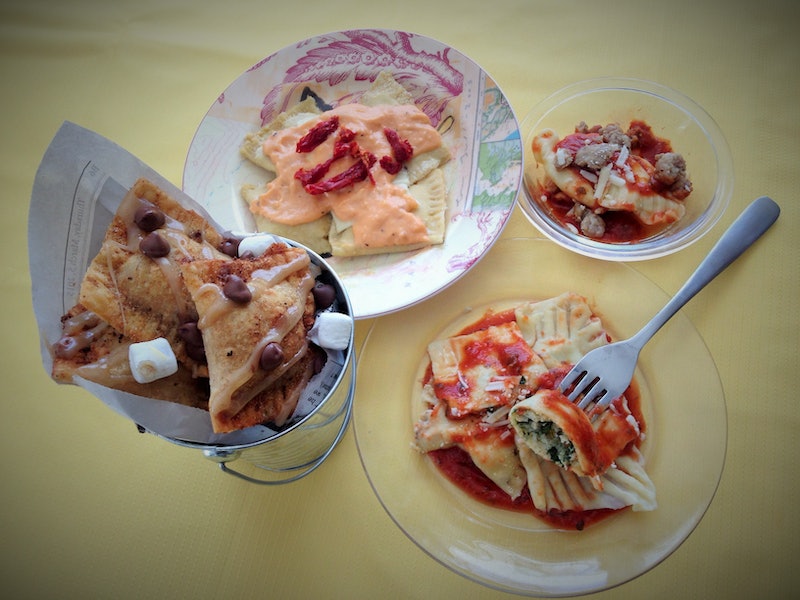 March brings us so many fantastic things worth celebrating: St. Patrick's Day, International Women's Day, the first day of spring — the list goes on. But there is one day that is frequently overlooked that you should maybe pay attention to this year, and it falls on March 20: National Ravioli Day. That's right, obscure as it is, there is an entire day devoted to eating everyone's favorite stuffed pasta dish — and as such, it only makes sense that you celebrate with a few all-star homemade ravioli recipes. Cue the cries of glee.

Raviolis are perhaps the most perfect kind of pasta. They’re adaptable and versatile, and can satisfy even the pickiest of palates. There are savory raviolis filled with meat and cheese, or sweet raviolis stuffed with cream and fruit. Raviolis can be served before the meal as an appetizer, paired with sauces as the main course, or fried up for a dessert. Do you really need more convincing that raviolis are flawless?

And although twisting the handle on a can opener and pressing “start” on the microwave might sound appealing, forget the Chef Boyardee, because you're a better cook than that. Whether you’re a staunch traditionalist when it comes to raviolis or you have a ravenous sweet tooth, the recipes below have you covered. Start by choosing your favorite fillings, then roll out a sheet of basic pasta dough, cook them to your liking, top them off with your preferred sauce choice, and voila! You've got a feast just in time for National Ravioli Day.

Although it might seem counter-intuitive to start the ravioli-making process with the filling, it is the best method. Ravioli filling can be made a day in advance of the pasta dough and refrigerated. All of the recipes below make enough to fill 24 raviolis.

Cut the sweet potatoes in half, lengthwise, and roast face-down for 35 minutes, or until tender. When they have cooled, scrape out the potato pulp from the skins and combine with brown sugar, butter, vanilla, nutmeg, cinnamon, and cream. Beat with an electric mixer until smooth. Season with salt to taste.

In a medium skillet, saute garlic and spinach over medium heat until the spinach is wilted. Once cooled, combine with four cheese ravioli filling until well blended.

In a small heated skillet, add 1 tablespoon of water and two sausage links. Cook until sausage is browned, using a spatula to break up the meat into crumbles. Once cooled, combine ricotta, mozzarella, Parmesan, mascarpone, breadcrumbs, nutmeg, and salt. Mix with a wooden spoon or rubber spatula until well blended.

Combine ricotta, chocolate, sugar, vanilla, and honey. When filling raviolis, add one marshmallow to each ravioli before sealing.

This basic recipe works for every ravioli filling, even sweet ones, and is perfect for boiling, sauteing, or frying. It should be used immediately after making for the best results. This recipe makes 24 ravioli wrappers.

On a clean surface, such as a counter top or table top, spread a light coating of flour. Using your hands, make a mound shape combining the flour and salt. Create a well at the center. While still maintaining the shape of the mound with one hand, use a fork to slowly beat in the eggs and 1 tablespoon of olive oil. Draw in the mixture until all flour has been added and the dough is in a ball form. Cover the dough ball with 1 tablespoon of olive oil, and let sit for five minutes.

Re-dust your work surface with flour. Cut dough in two, and set one half aside covered with a damp paper towel. With a flour-coated rolling pin, roll the other half of the dough out into a rectangle 1/8 inch thick (you should be able to to see your hand through it). Using a knife or a pizza cutter, trim the edges of the dough so they have clean lines.

Next step: Build Your Raviolis

Make an egg wash with 1 egg and 1 tablespoon of water, and brush the pasta sheet with it. On one half of your pasta sheet, spoon tablespoon-size scoops, about 2 inches apart. For the s'more fillings: add one mini marshmallow to each filling scoop. Fold the empty half of the sheet over the filling, like you would fold a blanket. Squeeze out air pockets around the scoops of filling using your fingers. Use your knife or pizza cutter to cut out the raviolis into squares.

Take a fork and crimp the edges of each ravioli, creating a secure seal. Dust with cornmeal, and lay each ravioli on a dusted sheet pan. Let it dry slightly before cooking or freezing.

Freeze, Boil, Or Fry Your Raviolis

These raviolis can be saved in a freezer-tight container or bag for up to two months. If you are eating the raviolis right away, make sure you make your sauces before cooking them. The savory raviolis are meant to be boiled, whereas the dessert ravioli is meant to be fried, but you can cook them to your liking.

Boil the raviolis in a large pot of salted water for 3 to 4 minutes. The raviolis will float to the top, so be sure not to cook too many at once to avoid crowding. Using a slated spoon, remove each ravioli and cover them with sauce of your choice (recipes below), or cover lightly in olive oil and serve with sauces on the side.

Pour enough olive oil in a pan, about 2 inches deep. Heat over medium heat to about 325 degrees. Drop the raviolis in the oil and cook for 2 to 3 minutes, or until lightly golden brown in color. Place on a paper towel to cool. For s'more ravioli: dust with cinnamon and sugar.

Time To Get Sauced

The best raviolis are always coupled with a complementary sauce. Follow the suggested pairings below, or mix and match your favorites for the most delicious feast.

In a medium saucepan, add 2 tablespoons of olive oil and a little warm water to a pan until it is well coated. Add garlic, and cook for 1 to 2 minutes over medium-low heat. Make sure the garlic is not browned or burned. Add in crushed tomatoes, sugar, Italian seasoning, garlic salt, and a sprinkling of salt and pepper. Turn the heat to medium, and simmer for 10 minutes. Stir occasionally. Add the basil and 1 tablespoon of olive oil. Add more salt and pepper, to taste.

In a medium saucepan, combine butter and cream over medium heat. Simmer 2 to 3 minutes to reduce. Stir in tomato paste, and stir continually until the sauce thickens. Reduce heat and add cheese. Stir until blended and creamy. Add salt and pepper, to taste.

In a medium saute pan, melt butter until it takes a golden brown color. Add sage leaves and remove from heat. Add a dash of salt, to taste. Serve immediately.

Melt butter in a small sauce pan. Slowly stir in marshmallows, until melted. Stir in nutmeg and cinnamon. Serve immediately.