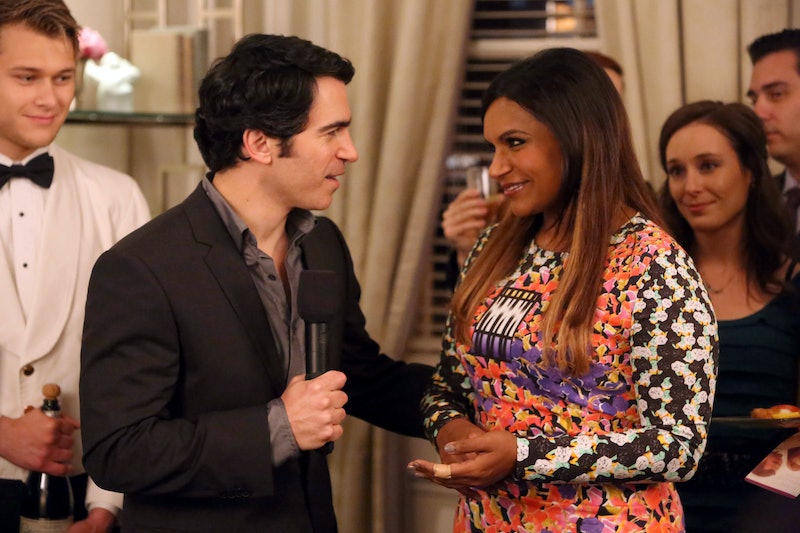 It was a slow road, excruciating road for The Mindy Project 's main couple Danny and Mindy since the premiere of the show in Season 1. The "will they, won't they" tension was something that kept fans coming back for more. But since Mindy and Danny got together at the end of Season 2, their relationship has jumped into the carpool lane and is driving at high speed. And I'm not complaining, since I love Mindy and Danny as much together as I do my own parents, it's just a lot to take in. And now, Danny and Mindy take another step in their relationship as they decide to move in together.

Moving in together isn't something that came out of nowhere, since the two have practically been living together for some time (while Mindy's amazing apartment remained empty... I would take it off her hands). But, with circumstances changing in the office, Mindy decided she was finally ready to move into Danny's (amazing) apartment. It's all happening, you guys!

On Tuesday's episode, issues arise with the new doctor at the office, Dr. Bergdahl, when he is rude to the nursing staff (and Beverly. Beverly isn't still a nurse, right? She once hoarded blood...). After telling Jeremy that Dr. Bergdahl has got to go, the nurse staff realized that they just got a man living out of his car fired. And that is not going to look good on Morgan's karma card. So in the goodness of their hearts (sometimes this show has well-intentioned motives!) the nurses (and Beverly) got Dr. Bergdahl his job back. But he was still homeless (technically).

Enter Mindy. Because Dr. B knew that Dr. L had an open apartment (that's totally not his style), he convinced her to let him live there in return for him sending his patients to Mindy's new fertility clinic (because girlfriend needs clients, real bad). Mindy was A-OK with this, because once again, girlfriend really needed clients (even Morgan's Cousin Lou was above the clinic).

The move-in was bound to happen. Mindy and Danny are a high-functioning couple who are going to welcome a child into the world, moving in together would make the most sense. So with Danny and Mindy living under the same roof and watching a mix of Real Housewives and Ken Burns docs, does this mean that there could also be wedding bells in the future? Honestly, that doesn't need to happen. While it seems like that would be right up Mindy's alley, the fact that these two are taking things at their own speed and in their own direction is kind of awesome. Who says that things need to happen in any certain order?

More like this
Shital Dropped Major Hints About Her Relationship With Niraj After 'Indian Matchmaking'
By Brad Witter
Netflix Reveals First Look At Wednesday In The 'Addams Family' Spinoff Series
By Bustle Editors
Who Plays Trent In 'Never Have I Ever'? Benjamin Norris Calls His Character A “Himbo Stoner”
By Grace Wehniainen and Radhika Menon
'Better Call Saul’s Co-Creator Explained Jimmy & Kim’s “Happy Ending” In The Finale
By Brad Witter
Get Even More From Bustle — Sign Up For The Newsletter