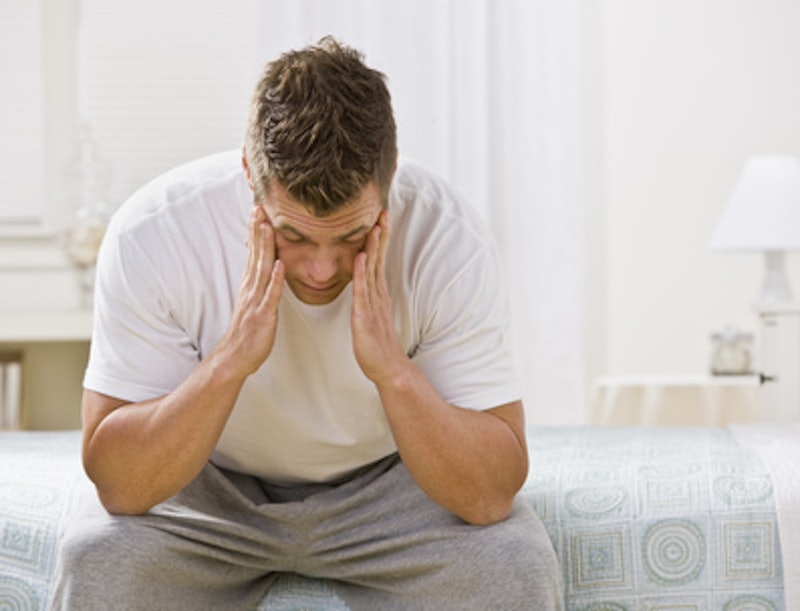 "Blue balls", at least to those of us without balls, seems like the first cousin of the equally mythical-sounding "jock itch". The latter, I'm pretty sure, being a thinly-veiled excuse for allowing crotch-scratching in public. "Blue balls" refers to the testicular pressure that men feel following elongated and intense arousal without ever reaching orgasm. However, especially among women, we kind of dismiss the male-uttered threat of blue balls as another pathetic rouse to get us to engage in more sexual activity with them. Among the countless injuries actually possible during sex, blue balls sounds the most like a nickname for a cartoon unicorn. In real life, it almost hints that you owe ball-havers an orgasm so they may dodge temporary discomfort. Although that whole debt thing is absolutely untrue, I do have some shocking news: Blue balls, as it turns out, is not the product of a long-running telephone game among the male species who crave a lay. It's real, it sucks, and it affects women, too.

Doctors and other science people have a more sterile term for the condition: epididymal hypertension. The colloquial term "blue balls" first came into play in the 1910s, a phrase we now so lovingly embrace for the vivid mental image it conjures and keeps there...forever. Basically, say a man participates in a crap load of very convincing foreplay. This kind of arousal inspires blood to rush to his crotch (related: that's how penises get erect—they fill with blood! Weirdly unsexy to consider literally, yes?). When all the dry-humping concludes without him blowing his load, his penis naturally redistributes the extra blood throughout his body. His balls, however, are a bit slower and the remaining bonus blood stays put for a spell, adding pressure and a sort of dull pain along the groin area.

Basically, the culprit is the biological lead-up to orgasm. Meaning, when all that rubbing, groping, and Sade builds to a natural point where the body expects intercourse to happen. If that does happen, an orgasm remedies what would otherwise turn into blue balls. That, ahem, expulsion kinda makes everything deflate and return to normal. Make sense?

My most favorite discovery among all the professional, journalistic research I did for this was learning about vasocongestion, (which at least one website calls blue ovaries and another blue vulva. OK.) Many women may already have an inkling of what this entails: It's pretty much the same sort of chain of events that can lead to blue balls: arousal > blood rush to genitals > no orgasm happens so > blood...stays in genitals. At least until our partner dips and we can finish the job solo, thus releasing the pressure and abolishing the dull throbbing in our crotch regions.

WEIRD how biology makes disappointing sexual exploits physically uncomfortable for literally everyone. Actually, not really weird. Not at all.

Scope out this great video to rehash all we've learned here today:

More like this
The 19 Best Tweets & Memes About Bisexual Awareness Week
By Lexi Inks
Breeding Kinks Have Been On The Rise Since Roe V. Wade Got Overturned
By Lexi Inks
Are Quality Time & Gift-Receiving Love Languages Compatible?
By Lexi Inks
This Psychological Effect Might Be Keeping You From Hitting Your Goals
By Lexi Inks
Get Even More From Bustle — Sign Up For The Newsletter