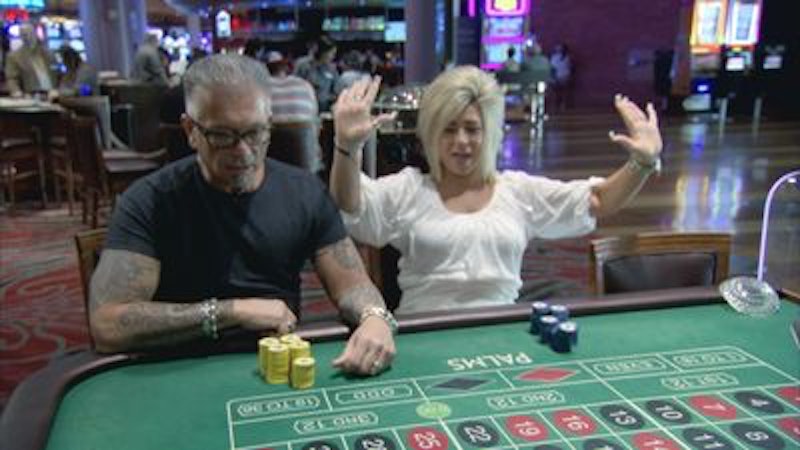 Though her “tawkin’ to the dead” (ah, the accent of my native Long Island people) is certainly compelling, the best part of Long Island Medium isn’t the readings, but Theresa and Larry Caputo’s relationship. They’ve been married for 25 years, bless them, and it just seems like their relationship keeps getting stronger and stronger. Now that their kids, Larry, Jr. and Victoria, are out of the nest, I’m totally interested to see how Theresa and Larry’s relationship is featured on the show. But how did these two lovebirds actually meet? Well, like everything in Theresa’s life, it all starts with spirit.

According to Theresa’s book, There’s More To Life Than This , Theresa’s Auntie had a psychic over, who told her that she was going to meet someone older than her “with a beard and a mustache.” Theresa was pretty skeptical (even for someone in the same field), because she was “dating someone at the time and didn’t even like facial hair.” Two years later, Theresa was working at Larry’s family’s oil company as a part-time customer service representative when the two finally met. He had a beard, a mustache, some fine 1980s mullet hair (as did she, I’m sure), and was 11 years her senior. Hard to be skeptical with that, huh? Theresa and Larry were married two years later, and, even though there were some bumps in the road (Theresa writes in her book that she used to have night terrors and wake Larry up screaming every night), they’ve been together ever since. To commemorate this love (and the season premiere of Long Island Medium on Sunday, March 8), I’ve rounded up some of my favorite Theresa and Larry moments from the show.

Valentine’s Day At The Arcade

Are you thinking that an arcade isn’t romantic? Well, when you’ve been married for over two decades, sometimes you need to go past the normal dinner-and-a-movie routine. What’s better than playing Whack-A-Mole with the person you love the most in the world? You can see part of their date at the beginning of the video above. Larry even bought Theresa some goodies with his ticket winnings — that’s true love. I wouldn’t give up my bouncy balls for anybody.

Some people think wedding vow renewals are trite, but I think that when you’ve been with someone for so long, it’s nice to reaffirm your feelings. You may feel all of the same things you did as when you got married, but how often do you say them? Larry’s heartfelt speech and subsequent tears (also found in the video above) as he and Theresa reiterated their everlasting love for each other made me tear up, too.

Being in a relationship means you always have a partner-in-crime to mess around with. Theresa and Larry are perfect in this regard. I loved when they “stole” her father’s truck to have it fixed up. They both had to keep the secret, and they both got to reap the reward when they saw Theresa’s father’s face when they returned the truck to him.

Trading Lives For A Day

You know the old adage about walking a mile in someone else’s shoes to be able to understand them? Theresa and Larry switched all their duties for a day — he did her chores, she did his — and they both came home at the end with a better appreciation for their significant other. That’s a must in any relationship.

I can’t wait to see more Theresa-and-Larry moments during the new season — mostly the Long Island hijinks they'll surely get them into.