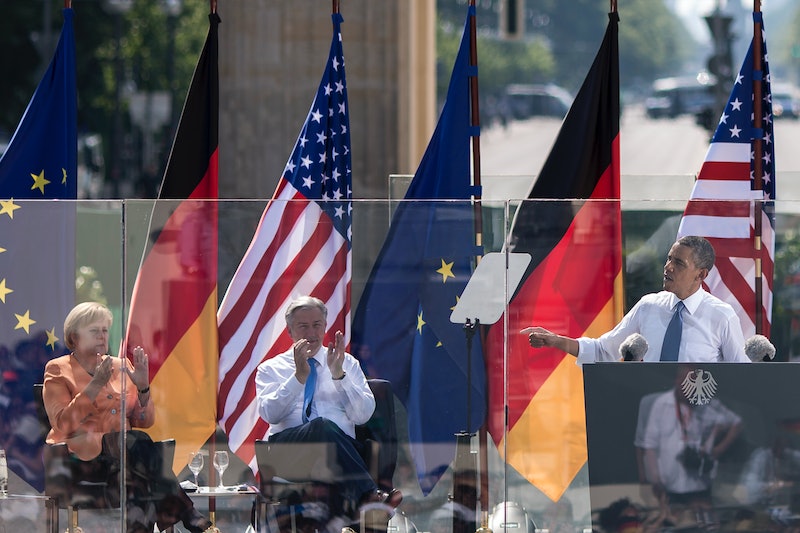 He had some 'splainin' to do. President Obama addressed 4,000 invited German guests outside of Berlin's Brandenburg Gate Wednesday, and his speech touched on a broad array of issues, from the United States' plans to reduce its stores of nuclear arms and its carbon emissions, to yes, the NSA.

Obama was hardly met with the fanfare he received during his last visit in 2008. Since then, many Germans have found themselves disappointed with his failure to close Guantánamo Bay, his hawkish drone policy, and most recently, the revelation that the United States' NSA surveillance programs have likely extended to German citizens. Obama addressed each of these issues briefly, with vague promises to redouble his efforts to balance "the pursuit of security with the protection of privacy."

Germany and its Chancellor Angela Merkel have been particularly critical of the PRISM surveillance program. East Germany's own experience with the authoritarian Stasi Police is, after all, still fresh in the country's historical memory.

"This is not a situation in which we are rifling through the ordinary emails of German citizens or American citizens or French citizens or anybody else," Obama insisted Wednesday. "This is a circumscribed system directed at us being able to protect our people and all of it is done under the oversight of the courts." He also pointed out that Germany was amongst the countries targeted in the over 50 terrorist attacks that were supposedly subverted thanks to information gathered through the program.

Needless to say, it hasn't been an easy month for President Obama. On top of dealing with the general criticism surrounding the NSA programs, he's seen his approval rating drop eight percent since May, and faced a series of unpleasant meetings with fellow world leaders including China's Xi Jinping and Russia's Vladimir Putin.

Despite these challenges, Obama managed to relay a message of hope, tolerance, and "peace with justice" to Berliners. It may not go down in history as the next "Ich bin ein Berliner" (which was, by the way, delivered by JFK in that same spot almost exactly fifty years ago), but he could've done a lot worse.

More like this
Read Dan Levy's Heartbreaking Message After The Club Q Shooting
By Stephanie Topacio Long
The David Beckham Qatar Controversy, Explained
By Sophie McEvoy
Kate Middleton & Prince William Were Booed & Mocked On Their U.S. Visit
By Jake Viswanath
Here's The Role Lady Susan Hussey Played At Buckingham Palace
By El Hunt
Get Even More From Bustle — Sign Up For The Newsletter