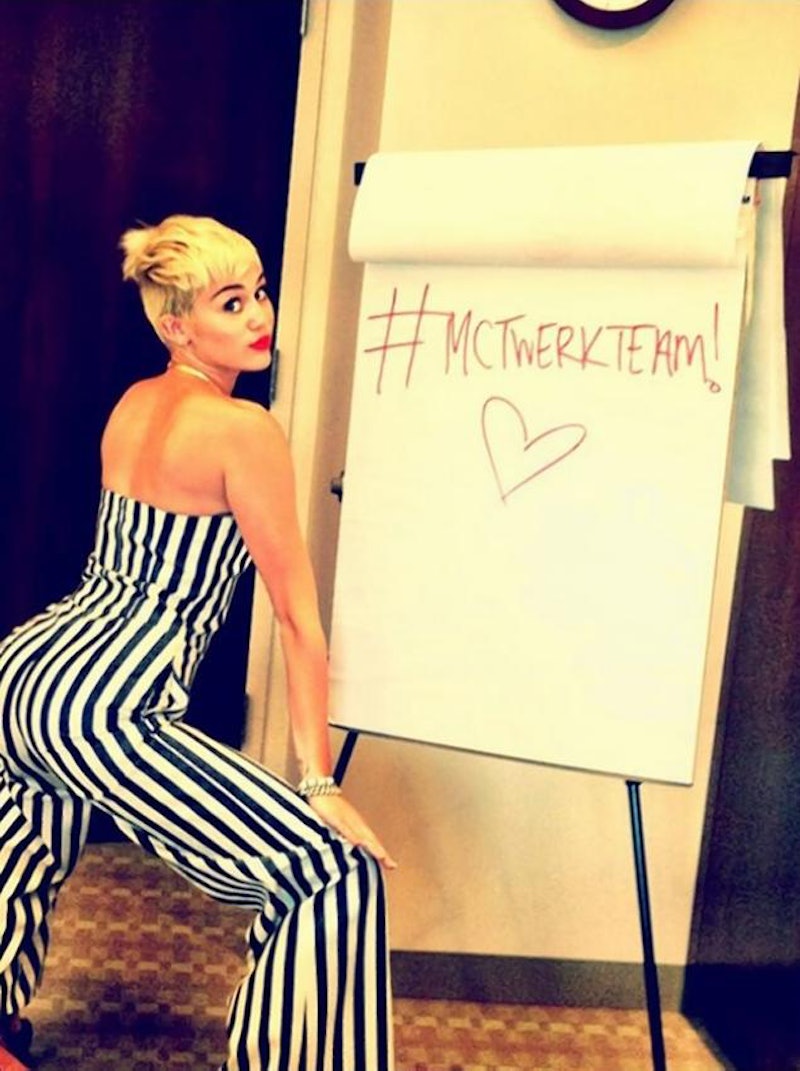 Miley Cyrus released her video for "We Can't Stop" today, asking followers via her Twitter to give it record views, and inevitably her fans obliged. The bizarre bath salts dream of a video shows Miley parading around an LA mansion, macking on dolls, eatings sandwiches made of money, and sporting some twerky alphabet soup. In fact, the twerk soup is what bothers me most (although literally everything else in the video is a close second). Let's talk about Miley's twerk craze for just a second.

In March, Miley's self-posted video of herself "twerking" went viral, featuring her doing... something akin to dancing in a unicorn onesie to the song "Wop." Later, after millions of hits on the video and subsequent creation of the #MCtwerkteam," Miley shared her expert opinion with Ryan Seacrest on twerking: ""You can't really explain (twerking)," Cyrus added. "It's something that comes naturally. It's a lot of booty action."

You know what, you can explain twerking. You could ask the members of the real twerk team, Lady Luscious and Mizz Twerksum, who began posting videos of themselves on YouTube in 2008 and went viral. But Cyrus seems to be ignoring all of that, gleefully calling herself ratchet and a big-booty ho without any thought about the implication.

Twerking has gone the way of the Harlem Shake — just another "fun" element of POC culture that becomes appropriated with no regard for their complex histories that are ignored by white culture until white culture finds a way to integrate them into the mainstream, finding a way to bounce in and out of them at will when convenient and trendy. Sesali Bowen at Feministing wrote a beautiful response to the initial Miley twerk team mess, noting "I can’t stress enough that pop culture trends like twerking, 'aint nobody got time for that,' or even just using the word ratchet to define the wild things that happened at last night’s party are all rooted in someone’s lived experience. Sometimes it’s your lived experience, but if it’s not, please stop for a moment to consider your privilege and what role you may be playing in the appropriation of someone else’s exploitation." Preach.

More like this
On TikTok, Miley Cyrus’ “Malibu” Is The Soundtrack Of Growth
By Courtney Young
Doja Cat Needed Tonsil Surgery & Now She Can't Eat Taco Bell's Mexican Pizza
By Jake Viswanath
Britney Spears Thanks Fans After Miscarriage & Explains Why She's Writing A Book
By Jake Viswanath
Joe Alwyn Reacts To Taylor Swift Earning An NYU Doctorate In A Rare Interview
By Jake Viswanath and Nicole Pomarico
Get Even More From Bustle — Sign Up For The Newsletter