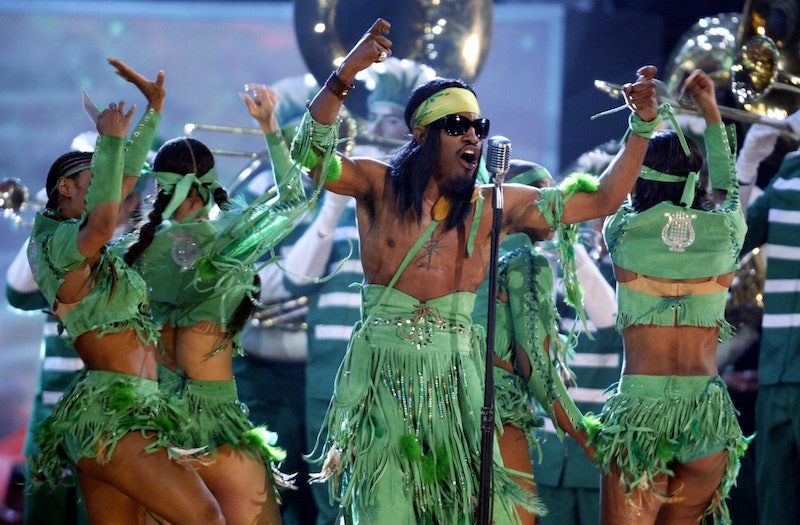 The 2000s aren't usually remembered as a decade of full of pop songs than don't mean what you think they mean. Because — and I say this with love, as a dedicated fan of all things early aughts, from Ashlee Simpson's singing career, to painfully flat-ironed bangs, to those matching denim outfits Justin and Britney wore to the VMAs — the pop songs of the early '00s were not very subtle. I mean, "Sk8r Boi" isn't secretly about the tragedy of soil erosion, you know?

But in most cases, one rarely had to dig far below the surface of a song to understand its meaning. Which worked fine at the time. Hey, we were really busy in the early '00! We had places to go, and MySpace Top-8s to manage, and a lot of one-sleeved shirts that weren't about to go wear themselves. We had very little time for sorting through opaque lyrics for vague meanings.

But just because the '00s were a pretty straightforward decade, doesn't mean that the entire era's radio hits were devoid of double entendres, secret rock 'n' roll messages, and hidden meanings. The time of Bush and Nickelback may feel like it was completely devoid of nuance; but these seven hits do give the most confusing pop hits of the '90s a run for their money.

What You Thought It Was About: Coming out of your cage, and doing just fine! You know, just generally feeling peppy and alive. I've screamed along to this after a few gin and tonics roughly one billion times, so I don't need to explain myself to you, okay?

What It's Actually About: Singer Brandon Flowers feeling a "gut instinct" that his girlfriend was cheating on him while he was lying in bed at home, and then catching her in the act at a local bar. Yup, "Mr. Brightside" gives "Born in the U.S.A." a run for its money in the "sounds celebratory, but is actually about something deeply depressing!" subgenre of pop songs.

What You Thought It Was About: Having casual sex, dancing, shaking your junk like a Polaroid picture, having a generally good time, and so forth.

What It's Actually About: "The world of modern relationships.”

The lyrics to the #1 hit, like the rest of The Love Below, are based on an unproduced screenplay that 3000 (Mr. 3000?) wrote about falling in and out of love; the song comes at the point in the story where our hero has slept with the object of his desire, and now begins to question their future together. (Also, did you know you're actually not supposed to shake Polaroids? It can give the photos streaks. Just FYI.)

What You Thought It Was About: A very sweet romantic relationship between two college kids living across the country from each other. Awww! Did you cry when this came on in a pizza parlor once while you were drunk, because no one had ever loved you this much? Maaaaaybe!

What It's Actually About: A very fictional romantic relationship involving a very real woman, written by a dude who had only met her once. Eeeeegh.

Plain White T's singer Tom Higgenson met Olympic track hopeful Delilah DiCrescenzo at a party once. Once. And then wrote a song that spun their totally fictional relationship as a non-tragic The Notebook. Once the song became a hit in 2008, DiCrescenzo appeared on Today to alleviate any confusion about whether she and Higgenson had been passionate college sweethearts.

“I knew it was fictionalized, and I’m glad that I finally get the opportunity to say I do have a boyfriend and it is romanticized,” DiCrescenzo said, being way more gracious than I would probably be ( I mean, it's creepy, right? Like, why did he use her actual name? It's like the song is fan fiction about their relationship or something).

What You Thought It Was About: Robbing people and drugs and stuff. I mean, duh? Like, there are gunshots and the words "take your money" right there in the chorus.

What It's Actually About: M.I.A.'s impressions of how immigrants are perceived in the countries they move to.

Maya "M.I.A." Arulpragasam hails from Sri Lanka, and has experienced life as an immigrant both in Britain and the U.S. She told The Daily Beast in 2009 that her Grammy-nominated hit was about "how we are seen to be really scary because we can take people’s jobs. People think it’s about robbin’ banks or something, or it’s about terrorism, but it’s not. It’s about immigrants coming over and us being really scary to people.” Wait, so what about the gun shots, then? “If you’re an immigrant you left somewhere and most of the time you fled a war," said Arulpragasam. "Gun sounds are a part of our culture as an everyday thing."

What You Thought It Was About: What every Maroon 5 song is about, obvi — how good Adam Levine is at sex!

What It's Actually About: A record company executive.

With any other Maroon 5 song, I'd say you're right (also: if you're actually so good at sex, WHY DO YOU HAVE TO SELL IT SO HARD, LEVINE?), but in this song's case, the person making Levine's life difficult isn't an obsessed ex, but a record company executive demanding that he write more songs. “That song comes sheerly from wanting to throw something,” Levine told MTV in 2002.

What You Thought It Was About: A young couple who are dealing with the guy's deployment in the Iraq War. Come on — I saw the video like 200 times in high school, at least give me this one!

What It's Actually About: Though the certainly video deals with a couple whose lives are disrupted by the war, the song itself is about the death of singer Billie Joe Armstrong's father. It's right there in the lyrics — "like my father's come to pass/twenty years has gone so fast."

What You Thought It Was About: A bunch of guys who were not yet rock stars, imagining what it would be like to become rock stars.

What It's Actually About: A bunch of guys who were not yet rock stars, imagining what it would be like to become rock stars BUT ALSO preying mantises.

During the band's Live at Abbey Road performance of the song, band members claimed that the song was inspired by a preying mantis who laid eggs in their apartment during their senior year of college and then died — leaving the band members with a gang of jumpy baby mantises on their hands. Obvious inspiration for a song primarily about models and hard drugs, right?

Now go get your pyramid-studded belt and wrist sweatbands, we're going out on the town!