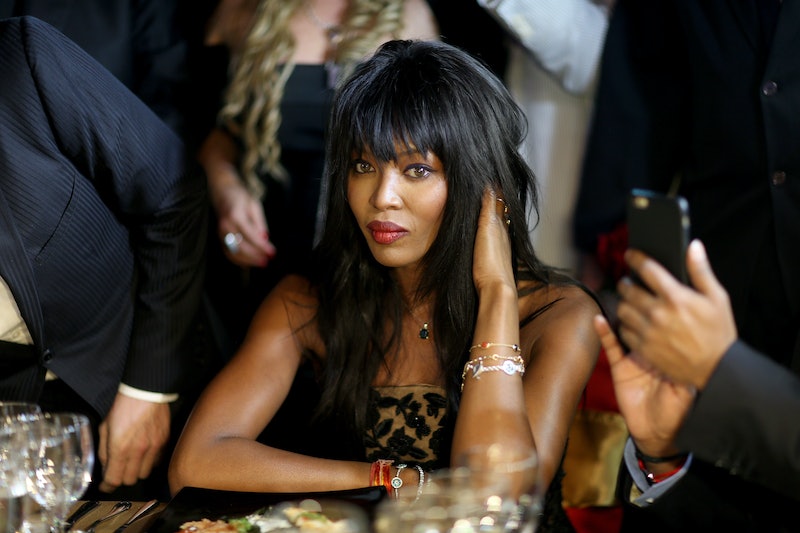 There's no doubt that the 2015 Paris Fashion Week will go down as one of the most talked about in the event's entire history because it has given the world everything from Zoolander's triumphant return to the runway, to Kim's hyper-blond moment, to a rumored catfight between two of the world's biggest supermodels — allegedly over Rihanna — that occurred during a PFW party. As juicy as it sounds, however, the latter has finally been squashed because Naomi Campbell denied rumors that she fought with Cara Delevingne at a packed nightclub on March 8.

"Don't know where this story has come from about Cara Delevingne and I fighting!" Campbell posted on Twitter two days after the news broke. "It is completely untrue, ignore the rumors." Meanwhile, Delevingne supported Campbell's statement by tweeting, "People love to make a drama out of nothing." Page Six first reported that both models were seen pushing and fighting at the Parisian club Castel after Campbell started screaming at the younger model over negative comments that she supposedly made about their mutual friend Rihanna. Witnesses claimed that Delevingne then proceeded to grab Campbell's hair during their tabloid tussle.

Even though Campbell says there's no bad blood between her and Delevingne, this isn't the first time that the supermodel has faced off with other runway beauties. Who could forget these classic Naomi Campbell feuds?

For years, Tyra Banks couldn't stop talking about how Campbell mistreated and disrespected her early on in her career. Their feud came to an epic halt after Banks invited Campbell to appear on her talk show in 2005 and the two put an end to the supermodel war. When asked how they've since remained on friendly terms, Campbell said, "It does irk me that two women of color have to be pitted against each other... I'm very proud of Tyra and what she's done with America's Next Top Model. I'm proud of her, I'm proud to know her."

During the first season of the reality competition series The Face, Campbell gave fellow judge and supermodel Coco Rocha a verbal beatdown that broke the Internet. After one of their judging disagreements, Campbell delivered this iconic piece of advice to Rocha: "Check your lipstick before you come and talk to me."

Watch a clip of their on-air spat below:

3. Pretty much every working model today

During an appearance on The Meredith Vieira Show earlier this year, Campbell threw shade at the "Instagirls" — the new generation of models like Delevingne, Kendall Jenner, and Gigi Hadid — for achieving fame without putting in the work. "It's amazing," Campbell said. "I mean, good luck to them. I just feel my generation of women, like Cindy Crawford, Linda Evangelista, Christy Turlington, Claudia [Schiffer], we had to earn our stripes and take our stepping stones to get to where we have gotten, to accomplish what we have achieved to this date."