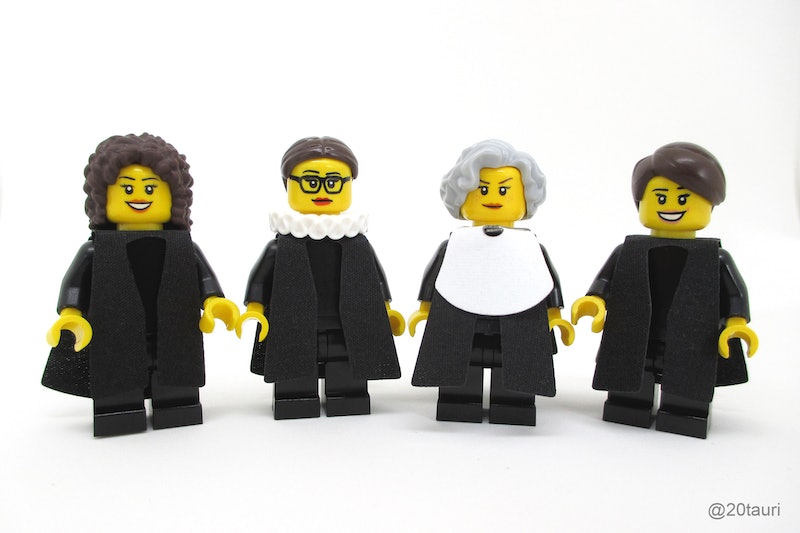 Holy awesome, this would be the ultimate feminist toy. LEGO recently released a highly successful female scientist kit, but this is much, much better — introducing LEGO female Supreme Court justices.

Sadly, tiny LEGO versions of the women who have served on the Supreme Court — Sandra Day O’Connor, Elena Kagan, Ruth Bader Ginsburg, and Sonia Sotomayor — won’t be coming to your local toy story any time soon. Artist Maia Weinstock created the models in honor of International Women’s Day. Weinstock calls her LEGO justices "the Legal Justice League" and on her website states that she built the scene “to celebrate the accomplishments of women in the legal realm, and to encourage girls and women to work toward high positions in the U.S. judicial system.”

Weinstock submitted her LEGO justice system to the Legos Ideas contest, which is apparently a thing that exists, but it was rejected on the grounds that the contest has a policy against political scenes. Pictures of Weinstock’s project have been circulating on the Internet, and many having been asking Weinstock for their very own set of LEGO women who have served at on the Supreme Court bench. However, sadly for those vying for the original creation, some of the parts are very rare and the artist doesn’t have the capacity to accommodate all of the requests flooding in.

I propose that instead, those who want a cool, pro-women LEGO model should make one themselves — think of all the important women and events that can be converted to LEGO form!

So as inspiration for your new LEGO project, here are some other awesome feminist toys:

This doll is like Barbie, but with realistic body proportions to foster healthy body image.

For young girls who want an adventure, this doll has specially designed movable joints and comes with a construction kit.

These adorable dolls come in the form of many important women in history, including Harriet Tubman, Virginia Woolf (above), Eleanor Roosevelt, and Rosa Parks.