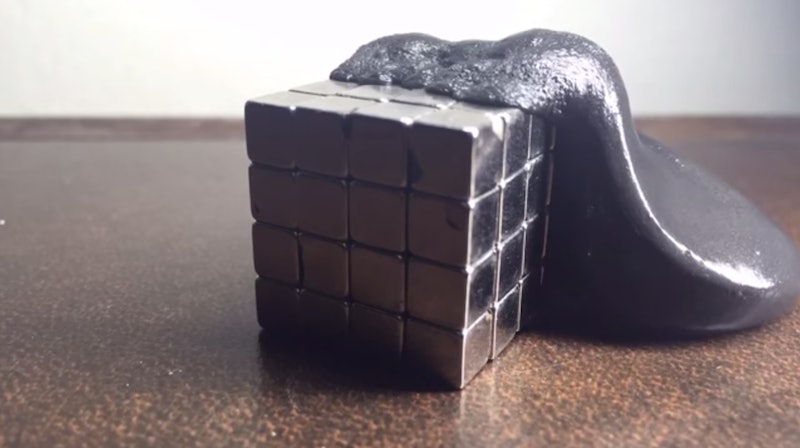 Have you ever wondered what it would be like to be eaten alive by that fat, goopy Pokémon that hid in the sewers? Now we have an approximate visual of what that would be like, thanks to this slow-motion video of magnetic putty in action. Before you start envisioning the innocent, mostly harmless putty you played with as a kid, you should know that this is a far cry from that. Magnetic putty takes on the form of both a liquid and a solid, and attracts itself to metal objects so intensely that it smothers them and puts John Travolta's overly-touchiness at the Oscars to shame.

There are two things I cannot explain about magnetic putty: why I am so fascinated by it, and also why it looks so completely gross. All I could imagine watching this was a potential future episode of Grey's Anatomy where a patient swallows this stuff and starts to die a slow horrible magnetized death before McSomeone saves them. (Apparently I have a pretty dark mind.) When it isn't in the presence of metal it behaves like any ordinary putty, which is probably why people are freaked out the first time they put it in the presence of something with a magnetic field and this happens:

I mean seriously, look at this magnetic putty drama.

BRB, my life is flashing before my eyes.

IT'S GOING TO EAT US ALIVE.

Here's the full video of the putty below, but stay tuned, because there is actually a DIY way to make magnetic putty in the comfort of your own hell fire lair!

OK, so it turns out making your own weapon of goopy destruction is fairly simple, and much cheaper than going out and buying some of it on your own. All you need is putty, black iron oxide powder (available at most art stores), and a magnet.

For every individual purchase of silly putty, you'll need to use about a tablespoon of the iron oxide powder. Massage it slowly into the putty for three to four minutes, careful not to let the dust go flying everywhere. For safety's sake you should wear a pair of rubber gloves and a face mask while using the exposed iron powder. But really, it's as simple as that to make your own putty and mess with the minds of unsuspecting friends, co-workers and acquaintances everywhere you go!

For the full instructions, click here. For retrieving your humanity after you watch this stuff eat all the metal things you love alive, you're on your own.