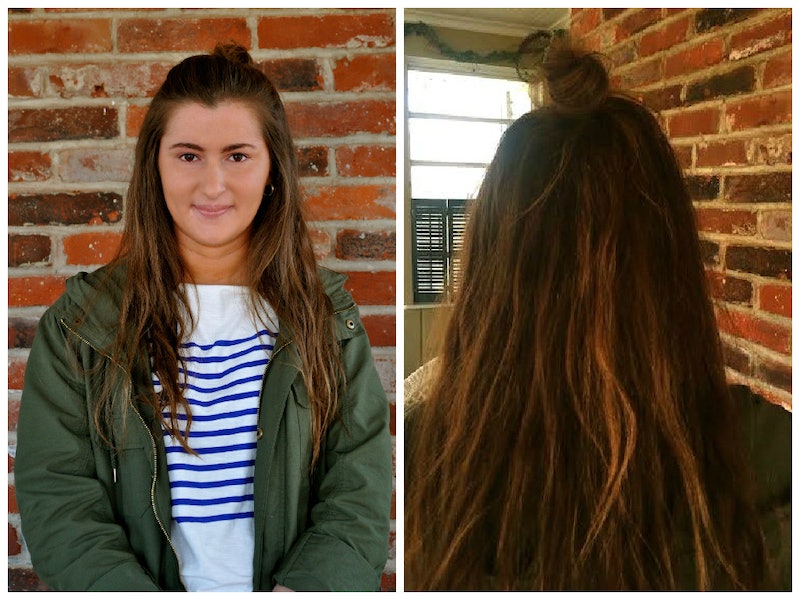 According to the ever-reliable Urban Dictionary, a man bun is defined as: "When a man has a bun. Usually it is slightly greasy but it is sooo hot. Hippies usually have man buns, or just general hotties." Well, while I am neither a man with slightly greasy hair nor a hippie, and I don't think "general hottie" is a term I would ever use, I do happen to be a broad that likes to sport the bun. I used to simply think of it as a little knot I pulled some of my hair into to get off my face. But ever since the fellas have started taking to the look, the man bun has gone viral.

The man bun is everywhere — we've seen renditions on Leo DiCaprio, Jake Gyllenhaal and countless studs on Tumblr. But I am taking the bun back! I'm not going to go scissor happy and cut off guys' buns, but it was mine first and I want it once more! And the answer to your question is yes, I am in third grade.

The first time I noticed that the men were stealing my do was a gloomy Tuesday on campus. It was then that I realized the guy sitting across from me in the lounge with shoulder-length hair was wearing his hair tied back into a little ball of sunshine just like me. While men sporting a bun usually get drooled over, I have gotten some different reactions to this nonchalant look. Check out what some people had to say about my man bun. Cue James Brown singing, "It's a Man's Man's Man's World."

Disclaimer: You might think all I'm doing is just, well, wearing a regular, old bun. But I was curious to see if I got reactions given that the trend has been so adopted as a "guy's" thing as of late.

I'll take it. Shang is badass and, in my opinion, his hair looks great. So this can only ever be a compliment.

Psh, no! Who, me? In the eloquent lyrics brought to us by Mac Miller, "I ain't no hipster, girl I can make your hips stir."

The answer to that question is, "Yes, I absolutely do." Harry Styles is a feminist, as am I. And there's a plethora of other reasons that prove we're basically the same person. I just don't feel like talking about them right now.

My mother asked me this one day, to which I replied, "You're on my list." She's also on my list because she didn't fill up the Brita pitcher, but that's another story.

5. "Your hair looks sexy pushed back"

My best friend said this so she was probably just humoring me, but I took it. I mean, I couldn't hate a solid Mean Girls reference if I tried.