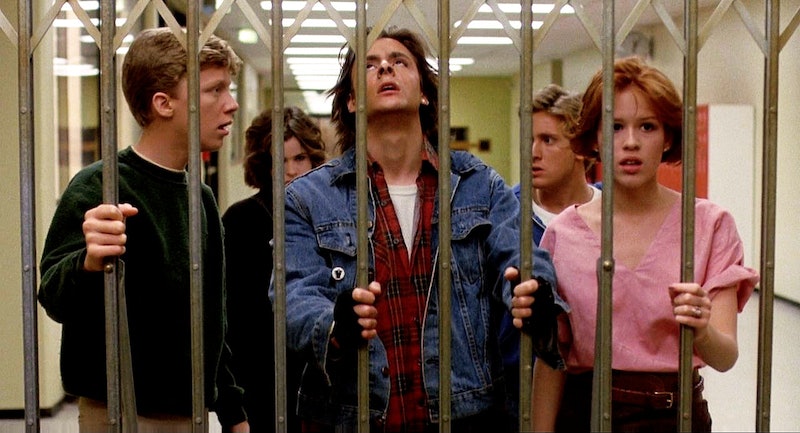 On the most sacred of Saturday mornings some 30 years ago, magic was made when five angst-ridden teenagers from wildly different rungs of the high school social ladder came together and endured weekend detention, serving time for offenses as disparate as the amateur delinquents themselves. In popular circle news, wrestling star and overall big man of the hallowed halls, Andrew Clark landed himself a spot in all-day purgatory after taping Larry Lester's buns together in the locker room, while queen bee Claire Standish was being punished for cutting class to go shopping. On the flip side of the social network, king of the nerds Brian Johnson soiled his squeaky clean image by bringing a flare gun to school, and all-around bad boy John Bender once again RSVPd "yes" to his open-ended detention invitation after pulling the fire alarm. Also, Allison Reynolds was there because she was bored and didn't have anything better to do on a Saturday.

Ah, but wait — as with any good coming-of-age story told by John Hughes, not everything was as it seemed on the stereotypical surface. While this group of legendary teenagers showed up for detention as "the athlete," "the princess," "the brain," "the basket case," and "the criminal," they left as The Breakfast Club . And it changed our lives forever.

It may seem nearly impossible — considering the relevancy of the movie's message and sheer number of times it is played on TBS — but this month marks the 30th anniversary of The Breakfast Club, the film that immortalized John Hughes and defined an entire generation. Scratch that — defines, present tense, every passing generation, forever and always, the end. In fact, I have come to believe that the only certainties in life are death, taxes, and the fact that someone, somewhere will always relate to the "convenient definitions" that make up this sacred club. Me, personally? I am totally a Claire, and you can bet your ass I've met a John Bender or two along the way.

You see, the beauty of The Breakfast Club is that it was wise beyond its years with an underlying message that will never go out of style. In many ways, Millennials and members of Generation Z couldn't be more different from those who grew up with Molly Ringwald and John Hughes, but there is one thing that remains the same: Everyone always wants to feel understood. Individually, the beloved characters represent stereotypes that cross generational boundaries — and the notion of feeling boxed in, pressured to be something you are not, that they explore is universal. In the end, as a unit, the Saturday morning club symbolizes what we all strive for in various forms and fashions — overcoming outside opinions and the realization that we can't really be defined. While pumping our fists in the air to "Don't You (Forget About Me)," of course.

Ultimately, what it comes down to is this: John Hughes is the coming-of-age king, the teen whisperer who will be giving people reason to classify and subsequently declassify themselves within a two-hour time frame for all of eternity. In one fell swoop, we could pluck The Breakfast Club gang out of the Shermer High School library and place them into 2015 without so much as a social disturbance.

The only one, tiny problem, albeit a highly recognizable one, would be their wardrobe. While everything about their personalities and positions in the social hierarchy is multi-decade, their clothes are straight up '80s. Seriously, bravo to the film's stylist for completely capturing the style zeitgeist with everything from Nike man tanks to neck scarves and ill-fitting khakis. Unlike our detention-attending friends, these ensembles would not fit right circa now.

So what if our favorite stereotypical teens were around today? What exactly would they be wearing to Saturday morning detention? Let's discuss:

As the popular rich girl of the group who seemed to have it all, Claire was obviously always in style. I mean, she was in detention because she cut class to go shopping. Hey, even in the '80s an on-point outfit was the standard shield to mask the fact that you were falling apart on the inside. However, our pristine princess was also conservative to the point of prudish perception, so she wouldn't be joining the bandage dress, booty short–wearing brigade — in today's fashion slang she's less Kardashian, more T. Swift. Even the middle finger she gave to John Bender was proper.

In 2015, Claire Standish wouldn't stray far from her over-the-knee skirt, but would opt for a more structured midi in an updated, modern print, while trading in her rolled-sleeve tee for a slight crop top (no visible belly button, obvs). Essentially, a mix of ASOS and J. Crew are her modern-day jam. Also those bulky brown boots would update to a heeled bootie or peep-toe platform pump à la Sam Edelman and she would be bold enough to rock whatever shade of lipstick she wanted (boob-application party trick optional, but still totally relevant).

Brian Johnson was so the nerd ahead of his time. While he was super smart and driven to succeed within the realm of the time period's typical nerd careers, he was also sensitive, which allowed him to see the world in a way his parents and peers didn't. Brian was not only the nerd of the group, but the thinker and, ultimately, sort of the leader. Basically, Brian Johnson is the Mark Zuckerberg of The Breakfast Club.

I fully believe that "the brain's" style would be just as laid-back today as it was in 1985, not because he doesn't care, but because he honestly doesn't see anything wrong with it. Circa Facebook's founder, Brian's wardrobe would consist of mostly nondescript hoodies of the zip-up variety, left slightly open at the top when worn to reveal solid, neutral, equally nondescript tees. The high-waisted khakis would be replaced with a relaxed denim, likely from somewhere completely mainstream and easy to shop, like American Eagle, and while Zuckerberg is known to be an Adidas sandal loyalist, I see Brian as more of a New Balance kind of guy in 2015. All gray of course, to easily match the entire assortment of rotating hoodies.

The jock of all jocks, Andrew Clark is 2015's real-life Finn Hudson. Sure, Finn was kind of a jerk in the beginning, standing on his quarterback pedestal throwing slushies, but then he turned it all around and became the most beloved member of the Glee club. Our boy Andy is the same — his trip to detention was the result of duck taping a nerd's butt cheeks, but by the end of that fateful Saturday, he shed a tear over it and stuck up for/fell in love with the strangest bird of the bunch.

Still, even after an emotional transformation, the one article of clothing a jock is never leaving the house without is their varsity letter jacket. Even in 2015, if you earn a letter, you're rocking it loud and proud. However, I do think Andy would make a few adjustments, like updating his cotton man tank to a pro athlete endorsed Dri-FIT tee and his sneakers to Nike's that color coordinate with his school colors.

Every decade has a defining bad boy, and John Bender in The Breakfast Club was to the '80s what James Dean in Rebel Without A Cause was to the '50s. However, in 2015, Bender is making waves like a young Jared Leto. With long dreamy locks, a passion for nonconformity, and that smirk that draws all the good girls in, Bender is definitely still rejecting societal norms, but now he's likely on his way to becoming famous and celebrated for it.

Rather than an ear piercing, he would opt for some statement ink and would absolutely be teetering back and forth between flowing, in-his-face ombre locks and the man bun. Thirty years later ,he is still holding onto his signature black pants, but in denim form with a much slimmer fit, paired with unlaced combat boots. His jean jacket has been replaced with a black leather one, and while he still dons the plaid, it is long-sleeved and sometimes found tied around his waist. Essentially, Bender is ready for Coachella or a cover shoot with Nylon all day every day and has a love/hate relationship with Urban Outfitters.

Socially awkward basket case with a penchant for sneakers no matter the outfit? Allison Reynolds, meet Kristen Stewart, you're 2015 doppelgänger. Reynolds walks and dresses to the beat of her own drum, with a signature look that consists of varying shades of black. While she, like Stewart, is stunningly beautiful when her hair is actually pulled back out of her face, she still prefers to wear it messy and in it's natural state.

Once in a while, when someone tells her it's time, she'll surprise everyone and dress it up, but on the daily she lives in her black converse high tops, rotating the rest of her ensemble between a black short-sleeve maxi, black skinny jeans, ripped black boyfriend jeans, and a black band T-shirt. When there's a chill, she layers with an oversize black cardi, slightly smaller than the monstrosity she favored in the '80s, or a black denim jacket. She rarely shops, but she'll peruse NastyGal or the thrift shops in her neighborhood and, like Bender, has a love/hate relationship with Urban Outfitters.

There you have it — the brain, the athlete, the basket case, the princess, and the criminal — The Breakfast Club 30 years later in "the simplest terms, the most convenient definitions." Also, who is ready for a remake? Cue the John Hughes–esque soundtrack.