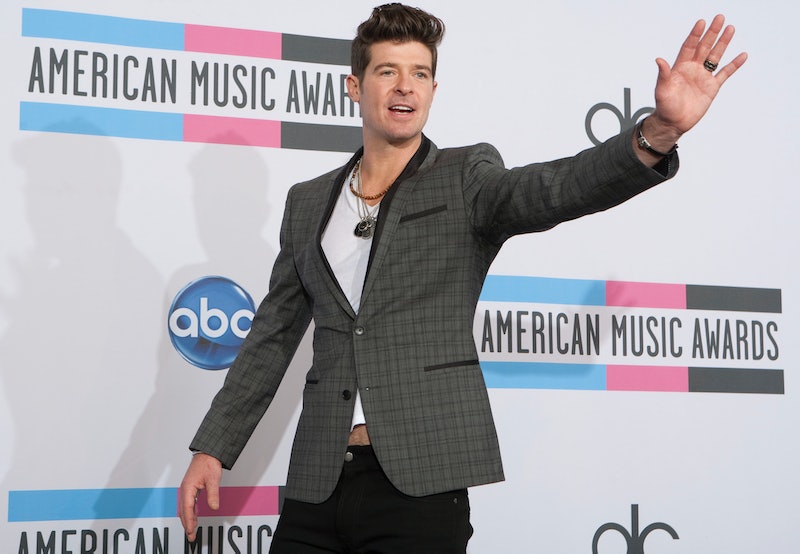 It looks like Robin Thicke's lawyer is not ready to "give it up" just yet. Despite Thicke and Pharrell Williams being found guilty of stealing Marvin Gaye's music from "Got to Give It Up" for their controversial 2013 hit "Blurred Lines," their lawyer still maintains their innocence. The lawyer representing Robin Thicke plans to appeal the verdict handed down on March 10. The verdict ordered his clients to pay up $7.4 million to Marvin Gaye's family for copyright infringement, and the attorney, Howard King, is determined that Gaye's family will see none of that money. As he told Fox Business,

We owe it to song writers around the world to make sure this verdict doesn't stand. My clients know that they wrote the song "Blurred Lines" from their hearts and souls and no other source... We are going to exercise every post trial remedy we have to make sure this verdict does not stand. We look at it as being in the seventh inning of a game that could go into extra innings.

If this is a game, as King implies, it's one that's been going on for quite some time, considering the Gaye estate started threatening legal action back in August 2013, and it's also one that has had many twists along the way regarding whether the song was truly original and new or if it was a rip-off. The court found a definite answer to the question. But it looks like Thicke's lawyer still thinks there are some blurred lines.

It probably did not help Thicke's case that he said in many earlier interviews for radio stations and magazines that he wanted to do a song similar to "Got to Give It Up." In his testimony to the federal jury, he backtracked on his earlier claims and said that he was drunk and high during said interviews. He also said that he was trying to take credit for part of the smash song, even though it was later revealed that Williams wrote the song on his own. For Williams' part, he maintained that the song had a late 70's "feel" but was not infringement. Gaye's family remained unconvinced. Not only do they want the singers to hand over part of the large profits they made from "Blurred Lines," they also want to halt further sales of the song. But Thicke's lawyer is still not backing down from the fight.

We will have to stay tuned to see if Thicke's lawyer has any success appealing the verdict.