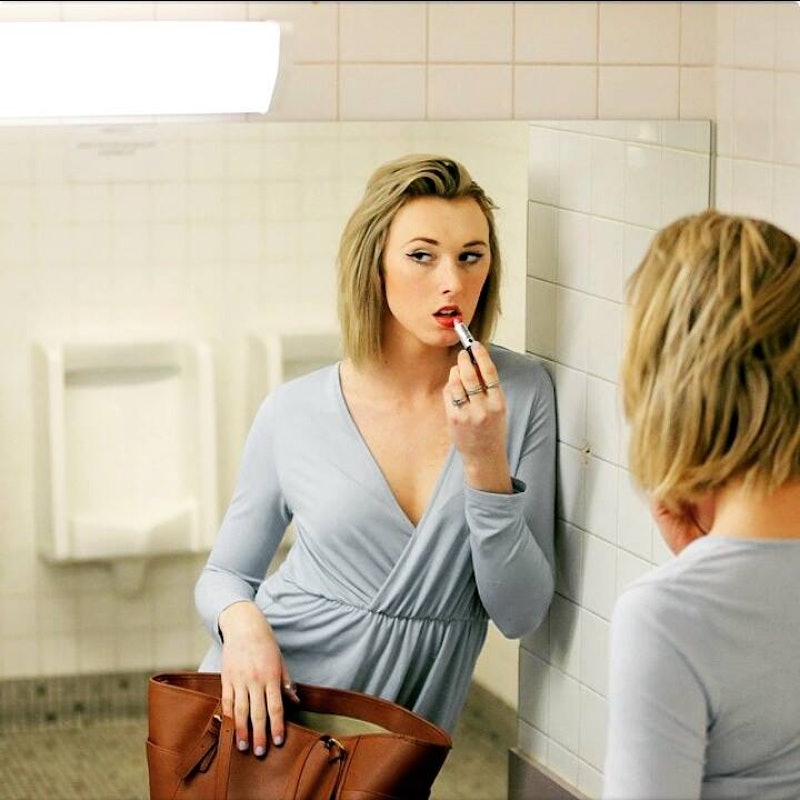 I roll my eyes at selfies most of the time, but here's an instance of them being used for the forces of good: Canadian trans rights activist Brae Carnes' restroom selfie campaign battles an amendment to a bill currently making its way through the Canadian government— and makes an incredibly important point about anti-trans restroom bills all over the world. Carnes, a trans woman, has been snapping selfies of herself in men's public restrooms and posting them on social media, depicting exactly what would happen if the bill were to pass. And you know what? Everyone needs to see these photos. They drive home exactly how ridiculous it is to make it illegal for trans people to use the restrooms with which they identify.

According to the CBC, Bill C-279, which is intended to protect transgender individuals from discrimination and hate crimes, was passed in the House of Commons almost two years ago; it's been stuck in the Senate since then, though, with a meeting that occurred at the end of February causing severe damage to it. Conservative Senator Donald Plett proposed three amendments during the meeting, two of which were deemed acceptable by bill creator Randall Garrison. The third, though? Is a huge problem — one that Garrison has rightly identified as transphobic. The amendment would exempt places like prisons, crisis centers, and public restrooms from the provisions laid forth in the bill — that is, it would force trans people to use facilities that do not align with their gender identity. This is so not OK I don't even have the words to describe it.

But that's where Brae Carnes' selfie series comes in. If a picture is worth a thousand words, then Carnes' campaign functions as the “show don't tell” demonstration the amendment needs. “I'm giving them what they want,” she said according to the Independent. “I'm actively showing them what it would look like if that became law and how completely ridiculous it is. It's just not right.”

Plett's arguments in favor of the amendment highlight everything that anti-trans language gets wrong. In referring to trans women, for example, Plett has said, “I will use men because I believe they are biologically male” — a statement with which there are so many things wrong I hardly know where to begin. It doesn't matter what you “believe” another person is; what matters is what they are. You can “believe” someone is biologically a cat, but that doesn't make them a cat. Anyone who identifies as a woman is a woman. Anyone who identifies as a man is a man. Anyone who identifies with anything in between, or something else entirely, is exactly what they are. End of story.

Furthermore, although Plett said according to Metro that letting trans women use female bathrooms and trans men use male bathrooms “allow[s] for pedophiles to take advantage of legislation that we have in place,” Carnes' response hits the proverbial nail on the head: “I think [the amendment] is actually giving predators a chance and an opportunity,” she said. “People think, 'Why's this girl in the washroom? She must be looking for a guy.' It's absolutely disgusting. Almost seems like a planned attack against trans people.”

While Carnes' campaign is specifically in protest of Bill C-279, it makes a broader point about the trans restroom issue overall. “Bathroom battles” continue to happen, as do controversies over locker rooms, prisons, and other locations. But for the visuals presented in Carnes' campaign highlight in no uncertain terms the fact that forcing a trans woman to use men's facilities or a trans man to use women's facilities makes no sense. It's the incongruity that does it; Carnes is right when she says she looks “out of place” in the men's room. And although it should be a no-brainer as to why she looks out of place, apparently it's not: She's a woman. The images take what is, for some, an abstract concept and make it concrete.

We've been making progress for trans rights in recent years, but we still have a ways to go. Hopefully projects like Carnes' will help us keep moving forward — and prevent us from taking steps backward.

More like this
10 Times Boris Johnson Got It Wrong On Trans Rights
By El Hunt and Sam Ramsden
How To Protect Your Digital Privacy If You Need An Abortion Post Roe v. Wade
By Kaitlyn Wylde
Becca Tilley Confirmed Her & Hayley Kiyoko’s 4-Year Romance With A Heartfelt Note
By Brad Witter
Jake Daniels Just Became The UK’s First Active Football Player To Come Out As Gay Since 1990
By Sam Ramsden
Get Even More From Bustle — Sign Up For The Newsletter