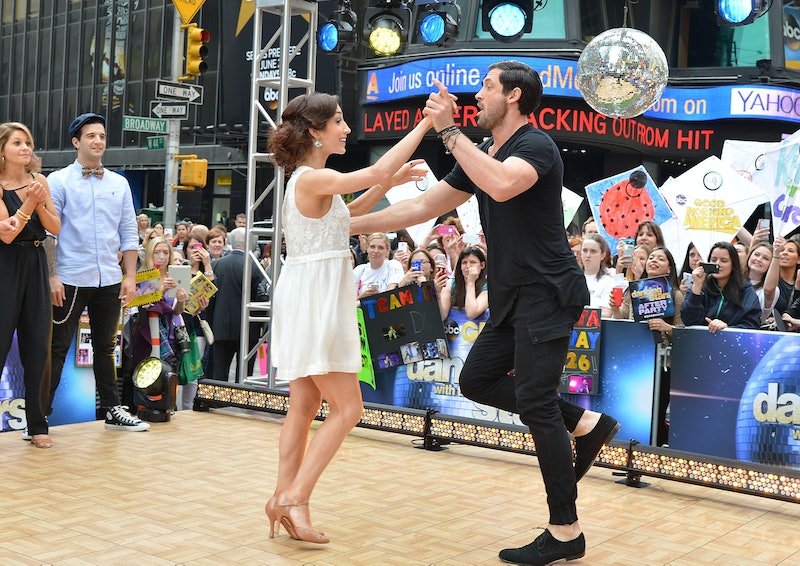 After Meryl Davis and Maks Chmerkovskiy won Dancing With the Stars Season 18, there's been one big question on everyone's minds: Will they dance together again? They collaborated at his Dance With Me show SWAY: A Dance Trilogy in Long Island back in December — which I saw, and it was just as mind-blowing and incredible as their time on DWTS — but those two short performances seemed to be the end of it for now as she heads back to the ice with partner Charlie White. Thankfully, that's not necessarily the case, as Davis told me at the opening of airweave premium bed topper's flagship New York City store in SoHo on Wednesday night.

When I questioned whether she'd be back for SWAY 's NYC show in June, she smirked, stroking her chin jokingly. "No comment. No comment on that. I don’t know yet, so I can’t really say…" she teases with a smirk. But when pressed further, she says that hypothetically she'd be 100 percent on board. "I would love to do it again. I definitely fell in love with dancing, especially through the course of Dancing With the Stars. So getting to dance with a professional dancer — a dancer like Maks — is such an amazing experience and I’d love to continue doing that," she reveals. "It’s something I definitely want to do."

As for a triumphant DWTS return if they ever revive All-Stars? She's not so certain — unless Maks would definitely be back. "I don’t know. It would be a tough call for me. I had such an amazing run on the show with Maks and I don’t think that he — I mean, I shouldn’t speak for him — I don’t know that he would necessarily would do it again. I don’t know that I would really want to change partners," she reasons. But what if it was a sequel to their fairy tale story, like Princess Diaries 2, I asked. (Maybe I was giving her and Maks the comparison of Mia and Nicholas, maybe it's just the first thing that popped into my head.) "Yes, I would do a Princess Diaries 2 for sure with him," she says with a laugh.

White would also come back for DWTS: All-Stars, just to see his partner Sharna Burgess again. "I think it would be fun. Sharna and I both felt like we could have gone further, so to have another opportunity, another crack at it, that would be great," he says. "She was a great coach, very patient, and just so much fun to work with. Really, that was one of my favorite aspects of it."

When it comes to this season of DWTS, both Davis and White are in agreement about the biggest frontrunner: fellow Olympian Nastia Liukin. "Even though I know Derek is going to be busy [with New York Spring Spectacular], I’d have to say they’ve got to be a front runner," White points out. Davis has a big reason behind thinking Liukin will take the Mirror Ball — aside from her being super athletic, that is. "We’re really good friends with Nastia, and not only is she really talented, but she’s an amazing person. And I think on Dancing With the Stars, it’s not only the dancing, but it’s who the audience connects with," she says. "It’s hard not to connect with Nastia — she’s incredible."

But that doesn't mean there won't be other fierce competitors this season, including someone Davis danced with during her season: Maks' brother, Val Chmerkovskiy. "I know Val really well too, and he’s a stickler for attention to detail. So I’m sure [Val and partner Rumer Willis] are going to come out amazing as well," Davis adds.

White and Davis are also both excited to see what Burgess' partner Noah Galloway can do. Like Derek Hough's former partner Amy Purdy, Galloway has a prosthetic limb. "I don’t know whether or not Amy knows Noah, but hopefully she’ll have some tips for him, potentially, about the mechanics of everything," Davis says, also gushing about how incredible Purdy was. "Amy was, I think, above and beyond what anyone could have possibly expected. Not only the story throughout the course of the show, but her actual dancing was amazing."