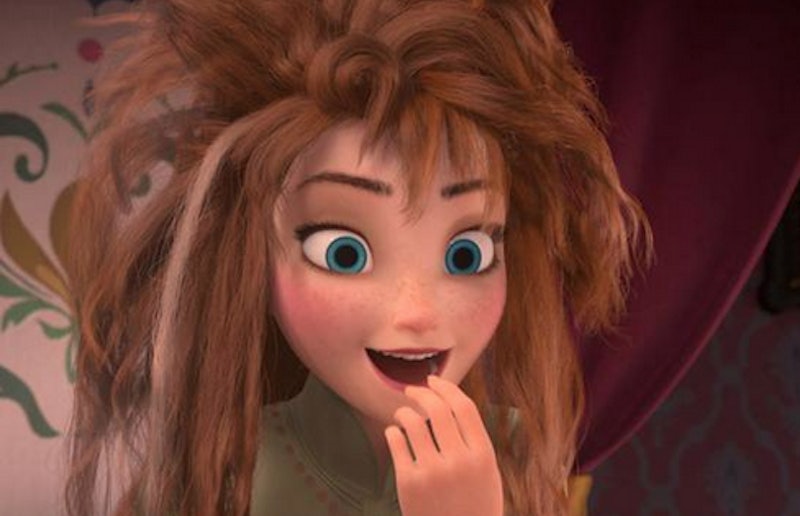 Look, I've been burned by Disney before. For a long time, we were tantalized by the idea of a Tangled 2, when, in the end, all we were given was a short, which was adorable but severely lacking in new hit songs I could use to annoy my neighbors. And although I have been anticipating the Frozen short tethered to the live action Cinderella movie coming out this weekend so intensely I could scream, never in my wildest dreams did I think that Disney would actually buckle and give us a genuine Frozen sequel.

If this is the first you're hearing of this blessed news, then let me just assure you: THIS IS NOT A DRILL. It is happening, and all the original cast members and co-directors have expressed an interest in joining back on, which means this could be every bit as beautiful as the first time around. Seriously, is it too early to buy tickets for a movie that doesn't even have the faintest idea of its own release date yet? I will sit outside of a theater for a year if I must. I know that sounds wildly irrational, but that is because I am feeling wildly irrational right now. I found out about this twenty minutes ago and my brain still hasn't stopped screaming. If you're as big of a Frozen fangirl as I am, then no doubt you experienced these same emotional stages when you found out about this miracle from on Disney high:

Hearing the words "Frozen" and "sequel" together in a sentence are basically the closest to spontaneously orgasming in public as I will ever get.

I can only call this experience emotional whiplash. Disney has been so thorough in crushing our dreams about this, assuring us all that it was off the table. For a long time, we assumed that the short they were working on was the sequel, or at least I did; even hearing the news from a human who knows better than to ever lie to me about Frozen did nothing to quell my fear.

It's not real. Two singular tears start collecting in both of your eye sockets. Somebody spread another lie on the internet, and you fell for it. You fell for it hook, line and sinker. Might as well go fall in love with the next boy you meet and let him take over the kingdom while you're at it.

WHO WOULD DO THIS?! If there were ever a time to go Mad Men on all your co-workers and shove all your stuff off the desk in a big whiny huff, this is it. WATCH OUT EVERYONE.

It isn't real until Google tells you it's real. Look at these headlines, guys. Look how beautiful they all are.

An excitement that makes you look like someone who really, really needs to pee

I need a muzzle. Like one of those things you put on dogs. It is taking every ounce of my willpower not to climb to the roof and shriek-sing all of "Let It Go" so badly it will make you miss Idina's hacked job of it this past New Year's Eve.

Worry that creeps into the marrow of your bones

Wait...what exactly could happen in the sequel? I think a part of the reason why we were so emotionally zen with them saying there wouldn't be a sequel is that it didn't need one. Everyone's happy and Hans got punched in the face. I really don't know what else I could want.

How could I doubt them even for a second? Who do I even think I am, questioning the creators of this masterpiece? It's obviously going to be flawless and I need to repent to my overlord Mickey Mouse immediately.

JONATHAN. FREAKING. GROFF. MIGHT FINALLY. GET. TO SING. Not giving this angel-voiced man a song in the first movie was a literal crime and I still lie awake at night plagued by the injustice of it all. I will expect nothing less than a full-on Kristoff solo followed up by an adorable Anna and Kristoff duet or I quit earth.

I'm not going to lie, I've been trying to write this article expressing my human emotions and already about ten times, I've stopped dead at the keyboard because my brain has gone to Arendelle against my will. I couldn't even begin to fathom what the plot is, or how far in the future it's going to be set, or whether or not there will be more cake. I've gotten my fix during the Frozen plotline of Once Upon A Time, but something tells me this is going to go in an entirely different direction.

Impatience that you cannot bear

I don't even know how long I'm going to have to wait for this. It's like being stuck in Disney purgatory. I'm just gonna climb into a hole, guys. Can someone just come get me when the movie comes out? Thanks.

More like this
The 'Hocus Pocus' Sequel Finally Has A Release Date & It Makes Total Sense
By Shannon Barbour and Radhika Menon
Meet The Disney Imagineer Bringing 'Guardians Of The Galaxy' To Epcot
By Charlie Mock
What Does Doctor Strange’s Third Eye Mean?
By Arya Roshanian
Elizabeth Olsen's Chris Evans Friendship Update Was Accidentally Hilarious
By Grace Wehniainen
Get Even More From Bustle — Sign Up For The Newsletter