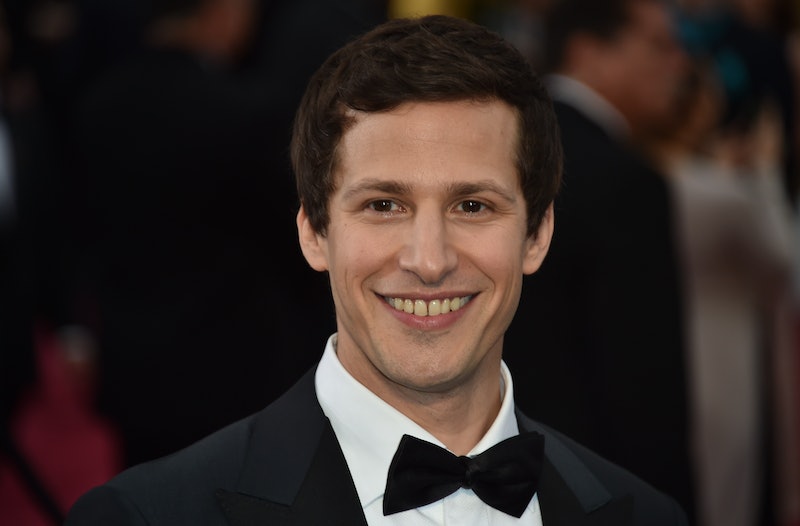 If winning an Emmy instantly catapults an actor into the A-list category, what's the outcome of hosting such a highly touted awards show? Since my friend roster includes zero uber-accomplished Hollywood actors, I can't actually confirm that information, but I imagine that hosting a show that honors television's finest comes with some seriously sweet perks that go far beyond anything my non-Emmy Award winning-self can conceive. Until we can figure out the answer to that, however, here's a slightly different, but no less important, question of the more immediate variety: Considering we know that he will be hosting the 2015 Emmy Awards, it's worth wondering, has Andy Samberg ever hosted anything before?

Of course, the question is worth wondering because the host of the Emmys is a big job: Samberg is a talented, hilarious guy, but hosting an awards show is a whole different ballpark to Saturday Night Live and starring in a television show.

But, the good news is that there's no more wondering needed here — because just a little bit of investigative work revealed that yes, the Brooklyn Nine-Nine star is far from a hosting newbie — more proof that he's totally perfect for this role as Emmys host.

In 2009, Samberg hosted the 18th annual MTV Movie Awards, which came after he and his Lonely Island Troupe colleagues went from writing for that exact show to penning jokes for Saturday Night Live.

In 2013, the future Golden Globe winner served as the host of the 28th Independent Spirit Awards, and was hilarious, at that.

The actor's other hosting gigs included SNL's Just Shorts special in 2009 and a "Hot Rod" edition of MTV's Scarred back in 2007. Basically, the guy's more than earned his right to host a major awards show, and clearly his experience both on and off the stage play a major role in why he's perfect for the role.

Obviously, viewers have to wait until the show airs on Sept. 20 to legitimately substantiate that claim, but something tells me he'll have no problem handling the job.