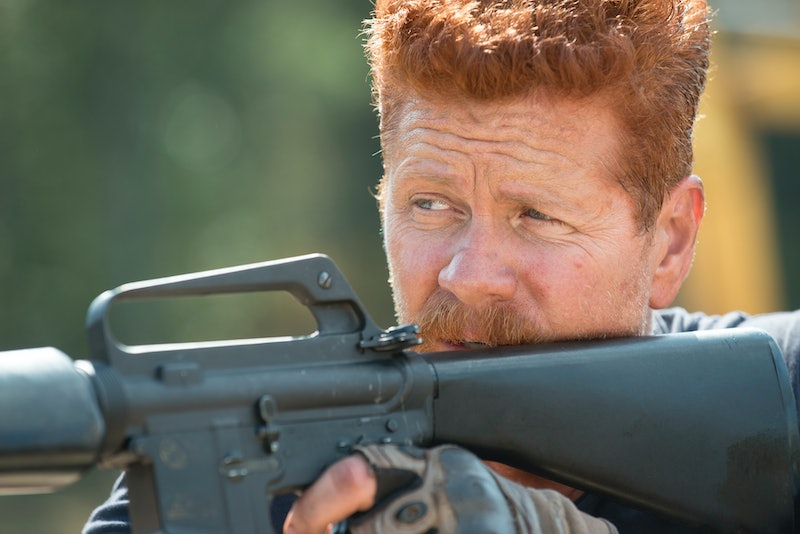 The Alexandria Safe-Zone may seem relatively calm, but threats still loom in this post-apocalyptic world. Namely, who are the wolves on The Walking Dead? We've seen the word "wolves" painted in a few places now as a warning, but what does it mean? Could the wolves be the Saviors from The Walking Dead comics? Wait, first of all, are there even "wolves" in the comics? Kevin Smith seemed to imply on last week's episode of The Talking Dead that there were, but I'm pretty sure this is a new concept in the AMC series. One theory I'm also fond of, which was put forth by Uproxx, is that the Wolves are the series' heroes themselves. They certainly are a pack and Carol is the textbook definition of "a wolf in sheep's clothing" right now.

However, I can't think of anybody who would be traveling ahead of the group and warning people about their arrival. As cool as this theory is, I have to prepare myself for the possibility that the Wolves are a new threat from the outside like the Saviors. Frankly, I'm ready for the action to pick up again, and next week's preview is already promising. After Father Gabriel issues an ominous sermon, we see Eugene facing off against... somebody. Are outsiders attacking already?

If you're a fan of the comics, it might seem too soon for the Saviors to appear. The group only just got to Alexandria. However, this is a television series and the action can't stand still for too long, especially this close to the end of the season. Plus, the Saviors' arrival was teased before the season even started — the choice to call Terminus a "sanctuary" and the man wielding a baseball bat towards Glenn were both allusions to the Saviors.

In the comics, they are a violent group that demands supplies from other survivors by way of force, so they could very well be called "wolves" and have a reputation around that part of the country. In fact, their leader Negan was the one who gave the group their name, so perhaps they simply haven't settled on it yet.

Let's talk about Negan, for a second. I'm sorry, but we have to (spoilers from The Walking Dead comics ahead). He's more of a cult leader than we've seen on this show (different from the Governor and his deceptive charm), with followers who worship him and several wives. If those Walkers with "W" carved on their foreheads came from this group, I would not be surprised. Negan did brand someone in the comics, and the group is prone to leaving "messages". He also kills Glenn, and if the show is getting ready to do that, I'd like to get it over with, please. I can't take all of the cruel teasing!

On the other hand, as Tumblr user jaxensmommy pointed out, the "Scavengers" in the comics approached Alexandria with the line "little pig, little pig, let me in," like the Big Bad Wolf from the fairy tale. This seems like pretty solid evidence that Derek, the leader of the Scavengers who said this, is associated with the Wolves. However... wolves are not necessarily scavengers. Wolves are Hunters. There is a group in the comics called The Hunters as well, but fan consensus is that they become the late residents of Terminus. So many groups! It's possible that the AMC series has combined the Scavengers and the Saviors to form the Wolves. That way, we get Negan and Derek for maximum villainy.