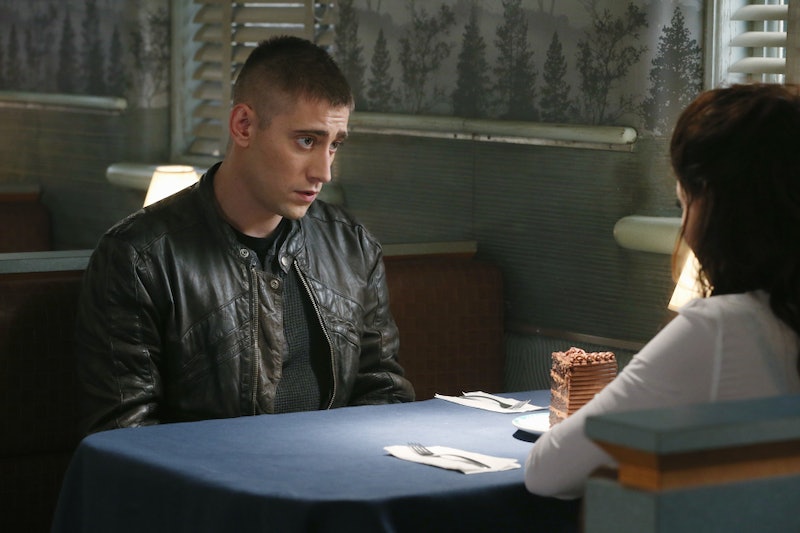 Once Upon A Time is toying with our 'shipper emotions once again. Assuming that Rumplestiltskin is gone forever, Belle has gone and moved onto another man — Will Scarlet. If you're like me, when you first saw them kiss in last week's episode, lots of feelings and thoughts rushed your way, like, "how?" "why?" and "YES!!" It was a lot to take in for Rumple, and a lot for us viewers, too. However, Belle and Will as a couple actually make a lot of sense. Actually, this might be my new favorite 'ship on OUAT : Scarlet Beauty.

While yes, it's a lot to digest right away — considering that everything happened so fast and we were kind of expecting that happy ending for Rumple — it's kind of great. Sure, Rumple doesn't look like he's on track to get his love back, but enough about him. This is about Belle and Will, and considering all that these two have already been through, it's about time something good finally came their way.

And let's be real for a second — Rumple and Belle? Did we ever expect that kind of situation to work out in the long run? Here's now the new coupling makes perfect sense.

They've Both Had Major Heartbreak

Belle had Rumple, and Will had the Red Queen (aka, Anastasia Tremaine, hey, remember Once Upon A Time In Wonderland?). Rumple has gone and stomped all over Belle's heart 100 times by now, and she's slowly stopped loving him the way she once did. Rumple has caused her heart to shatter over and over, especially every time that dagger was involved.

Same goes for Will. He's here in Storybrooke, without Anastasia, and it appears as if something went down between the two of them, since they're not together now. Will seems to be mending a broken heart himself, since he has the pages from the story book that focus on Anastasia.

They Both Fell For The Wrong People

It's one thing to have your heart broken, and it's another thing to have it broken by the villain. Yeah, let's just go ahead and call both Rumple and Anastasia villains of the story. Though Rumple has his moments where he's on the right side, and Anastasia wasn't always all evil, that's their underlying theme. It's hard to love a villain, especially after they continue to do all sorts of horrible awful things.

They've Both Been Displaced From Their Homes

The story of Beauty and the Beast has Belle leaving home to save her father, and ending up in the clutches of the wicked Beast. OUAT follows that same story, since Belle leaves home to save her village and ends up with Rumple. Both times, she doesn't exactly end up with the best home life, but she makes the most of it.

Will, on the other hand, has traveled from the Enchanted Forest to Wonderland to now Storybrooke. He's bouncing all over the place. It might be nice for Belle to have someone who also doesn't have a solid home to call their own. Maybe they can make one together.

They've Both Got A Little Edge To Them

Will's actually got a lot of edge to him — he does like to indulge in alcohol quite often — but Belle has a wild streak too, one that really shone when she was Lacey. Belle also has crazy inner strength that just took some time to be uncovered. Remember when she stood up to Rumple and banished him from Storybrooke? Yeah. Belle has a backbone, and needs someone else just as strong.

They Could Have A Fresh Start Together

Both have been through a lot and experienced way too much drama in their lives. Leaving all of that behind, Belle and Will could actually have a chance at something long term, and at, dare I say it, a family? Belle has so much mothering instinct, I've always felt we'd see her have children at some point. Rumple was probably never going to be ready for that. Will, though, just might turn out to be the second most perfect OUAT dad (the first being Charming, of course).

I'm going to be honest for a second, I never understood Rumple and Belle. I was willing to accept it because they seemed to really love each other, and hey, you do what makes you happy. But now Rumple doesn't make Belle happy, and I'm so ready for her to move onto someone who does.