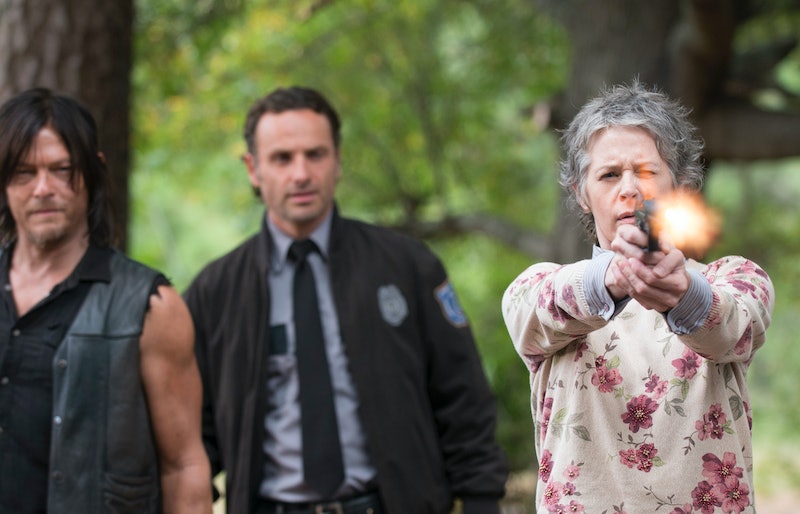 For the less perceptive of The Walking Dead fans out there (don't worry, you're in good company), the show has been leaving clues of a possible next big plot point with walkers with Ws carved into their heads and references to wolves. So does W stand for Wolves? Although walkers with Ws on their heads have been around since the Season 5 midseason premiere (there was a truck where zombies with the Ws spilled out of), Rick, Carol, and Daryl finally saw a walker branded with the infamous W during the March 8 episode "Forget." And now The Walking Dead fans are officially in a tizzy about the Ws and what that means for our favorite band of zombie apocalypse survivors.

Skybound Entertainment's The Walking Dead website has a poll asking fans what they think the Ws stand for — and not surprisingly, the Wolves were in a commanding lead as of March 13 with 47 percent of the vote. (The second place vote in the poll was that the W is actually a backwards M for Morgan. Although Morgan is poised for a comeback, I'm more inclined to say that the Ws are a sign from the Wolves.)

There are no Wolves in the actual comic books, but there are theories, like one reported by Inquisitr, that they represent another group from the comics going by a different name. (Kind of like how the people of Terminus in the TV show never went by their comic book cannibalism counterpart's name of the "Hunters.") The idea of the Wolves was also introduced in the midseason premiere ("What Happened and What's Going On") when the group went to the community where Noah's family was supposed to be and found it ravaged. The ominous message "Wolves Not Far" was spray-painted on a wall of the Richmond, Va. Shirewilt Estates.

Is it a coincidence that the Wolves and the Ws first appeared in the same episode? I think not. So, if the two things are related, then the most likely group that these Wolves could be are the Scavengers from the comics. The Scavengers seem to be the Wolves, as ComicBook.com pointed out, because in the comics, not only are they from Washington D.C., but also the leader of the Scavengers, Derek, says to Rick, "Little pig, little pig...let me in" when trying to gain entry to the Alexandria Safe-Zone. Nothing like a child's nursery rhyme to completely creep me out. Who needs to be scared of walkers when you have disgusting people like Derek milling about?

If the Wolves came in and ruined the Shirewilt Estates (the damage done had not been all zombies), the Alexandria Safe-Zone seems like the next logical location for them to target. Now that doesn't explain why they are carving Ws into walkers' heads (if it is even them doing that). Maybe it's an intimidation tactic or a way of tracing where they have been, but if we are looking to figure out who the next big bad group of humans to mess with Rick and gang is, the Wolves/Scavengers seem like a good place to start. Especially with Carl perusing this comic in Alexandria called "Wolf Fight."

But it's important to note that the W isn't the first time a mysterious letter has been hinted at. Gareth of Terminus first appeared in the episode named "A." And there were quite a few As in the background of shots when dealing with his storyline.

But that wasn't the end of the As. Now that our group is in Alexandria, they have been branded by the A stamp.

With As and Ws flying around, the masterminds behind The Walking Dead are definitely trying to befuddle us. But if someone was going to take the time to carve Ws into heads of people, they have to be pretty messed up. Maybe the Wolves brand the humans they kill so when they turn into walkers, they know they were the ones to make them that way. But if the Wolves think they will be carving Ws into the heads of the people of Alexandria — they have another thing coming.