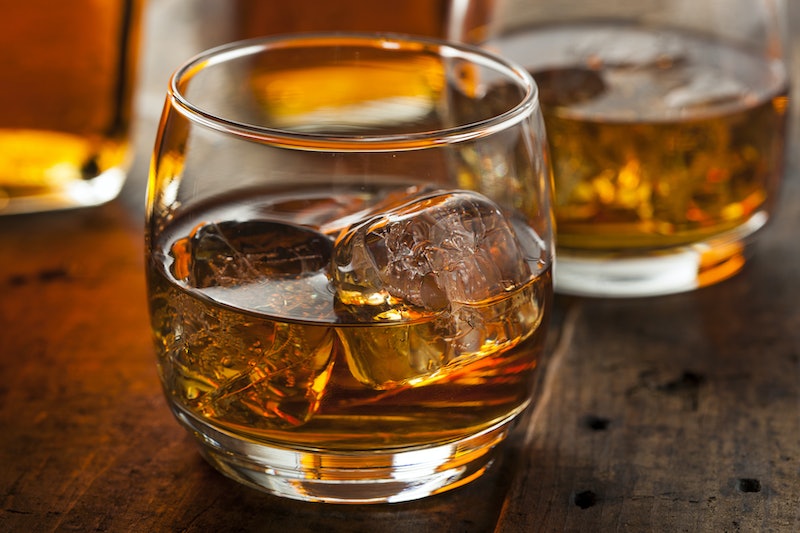 It looks as though one of America’s favorite drinks might be coming upon some hard times — experts say a dreaded bourbon shortage is upon us.

Bourbon’s popularity has skyrocketed in the past few years, thanks to changing tastes, and perhaps also due to Don Draper’s affinity for the booze. The problem with a large increase in demand for the American whiskey, which produced $2.7 billion in revenue last year, is that it takes a long time to produce. By law, bourbon must be aged for at least two years to classify as “straight bourbon,” and labeled if it's aged less than four years. Most high-end bourbons are kept in their barrels for much longer, anywhere from eight to 20 years. This shortage is occurring because bourbon producers didn’t predict this spike in popularity 10 years ago — how could they? — and are now scrambling to keep up with demand.

Some bourbon makers are coming up with creative solutions to cope with this shortage. According to Nautilus, new distilleries are using smaller barrels and rapid oxidation to speed up the aging process. However, some bourbon connoisseurs find that this type of sped up production leaves the liquor without the proper taste profiles. Maker’s Mark cause quite a stir last year when they announced that they would be watering down their bourbon in order to avoid a shortage. Customers were outraged that their Maker’s Mark would be less alcoholic, and caused so much ruckus that the brand reversed their decision.

Now, if your bourbon of choice is mid-shelf, like Jack Daniels or Jim Bean, you should come out of this unscathed. The people who should be worrying are the bourbon fanatics who seek out the older bottles — and they have been. The Wall Street Journal reports how bourbon lovers have been reacting to the shortage, and these enthusiasts are not joking around! One person joined a private club to buy straight from the distillery. One man has a stockpile of at least 50 bottles and counting, and another one has been making regular trips from Denmark to Las Vegas in order to pick up his favorite bottles.

So while I don’t think that you need to run to your local liquor store right this second, it might be a good idea for bourbon lovers to pick up a few bottles in the next month or so, as the easiest way for distilleries to balance out overwhelming demand is by raising prices. And for those of you reading this and smiling to yourself because you never really liked bourbon anyway, here are some other recent shortages that might help you relate to bourbon lovers' current crisis:

Whyyyyyy? We’ve waited so long for Girl Scout cookies season and then this happens?

Apparently last February the World Clown Association experienced dropping numbers, although honestly I can’t say that I’m even a little bit upset about a clown shortage.

Luckily I haven’t seen or felt any effects of the chocolate shortage yet. If anything gets in between me and my chocolate, there will be problems.

Fortunately, we've managed to bounce back from most of these crises in one piece — rest assured we will survive this bourbon shortage, too.

More like this
15 Black-Owned Liquor & Wine Brands To Add To Your Bar Cart
By Alexis Morillo
12 Aphrodisiac Desserts To Spice Up Your Valentine’s Day
By Kaitlyn Wylde
Learning To Love, Not Judge, The Lunchbox Wives Of TikTok
By Esther Zuckerman
16 Trader Joe's Appetizers That Are Total Party-Pleasers
By Kaitlyn Wylde
Get Even More From Bustle — Sign Up For The Newsletter
From hair trends to relationship advice, our daily newsletter has everything you need to sound like a person who’s on TikTok, even if you aren’t.