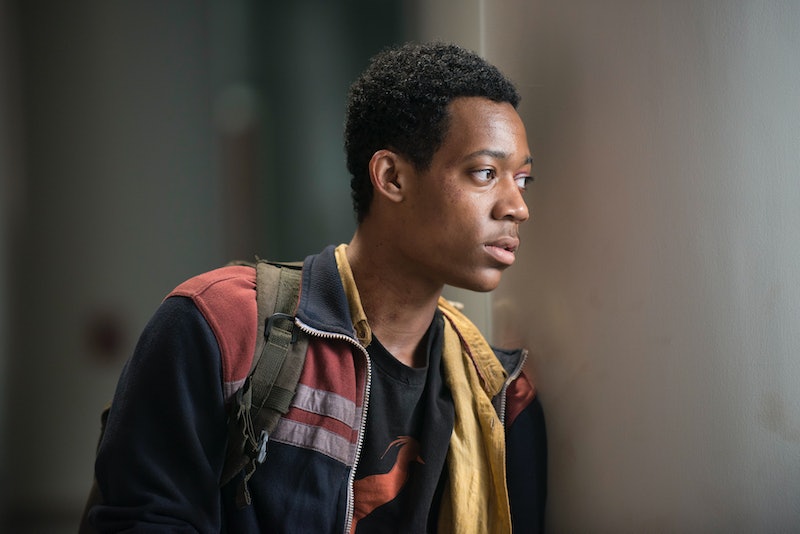 That was like the most stressful physics word problem of all time. On Sunday's episode of Walking Dead, Noah died after being thrown to the Walkers when three survivors were stuck in a revolving door. Nick was one side, and Noah and Glenn were on the other. There was no way all three of them were going to escape, even if the mathematics and leverage checked out. Nicholas, one of the "weak" residents of the Alexandria Safe-Zone, freaked out at the last moment and let Noah get taken in order to escape. Nicholas also attacked Eugene, who finally showed a thread of bravery by blasting some hot jams out of the supply run van to draw attention away from Glenn, Noah, and Nicholas. I'm not a fan of this fellow. Glenn knocked him out at the end of the episode, but I don't think that will be the end of it.

Noah wasn't the only casualty at this particular supply run. Deanna Monroe's former ROTC son, Aiden, was the first to go. I'm sure that will lead to some harsh repercussions to our friends next week. Deanna is already regretting her decision to put so many of Team Rick's members in authority positions at Alexandria, and Father Gabriel's bizarre warning at the end of the episode didn't assuage her fears.

Tara was attacked as well. Did she survive? She has a head wound and Peter, the surgeon in residence, is drunk and occupied with his own stuff right now. The promo for next week's episode, "Try," showed four freshly dug graves. As much as I liked Tara's youthful spirit on the show, I don't think her chances for survival are very high at this point.

Is Glenn going to kill Nicholas on The Walking Dead next? The emoji spoilers Josh McDermitt gave Bustle in an interview are making a lot of sense after this episode. Is the "Santa" emoji referring to a Saintly version of this week's most cowardly character?

Whatever happens to Nicholas, I hope Noah rests in peace. He may have had a short run on The Walking Dead, but it was definitely memorable.