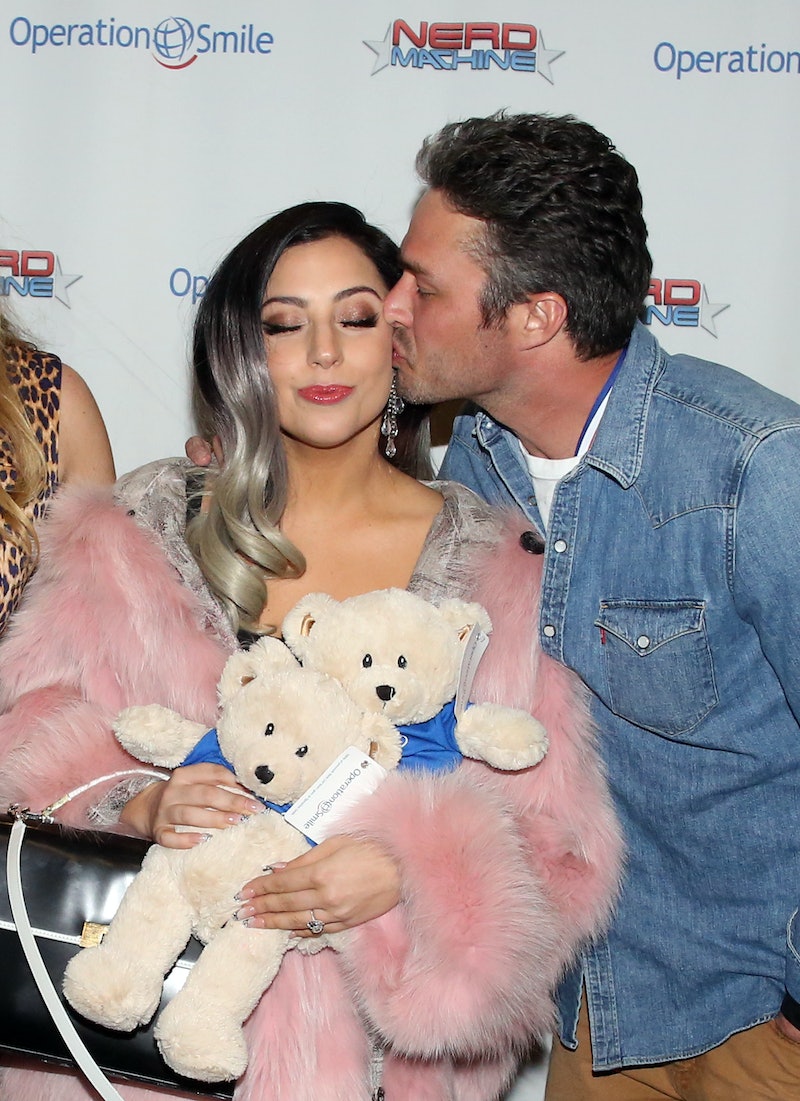 You know when a couple has been together for so long that they start to look like alike? Lady Gaga and Taylor Kinney aren't even legally wed yet, and this is already happening to them. As far as I can tell from some pictures of a ski trip they went on this weekend, Lady Gaga and Taylor Kinney now have the same hair. This seems to be evidence that Gaga and Kinney are experiencing an accelerated version of the old-married-couple phenomenon.

On Saturday, Gaga sported a charcoal wig that faded into a sandy grey at the Celebrity Ski & Smile Challenge in Park City, Utah. As Us Magazine reports, the singer cheered on Taylor Kinney, her future husband, who competed in the tournament. In what was either a show of support, or the nature's response to intimacy, Gaga's mane matched that of her fiancé.

If I didn't know better to think that the Cheek to Cheek singer's coif was a weave, I would say that we could expect this couple to produce some babies that go distinguished gray very early on in life. I’m imagining that this is something they’ve already talked about, because how could you not want kids with cool salt and pepper hair??

Other than the fact that they’re starting to look a tad alike, there are plenty of other things that prove Gaga and Kinney are getting a jump start on this whole “growing old together” thing. Let’s run ‘em down, shall we?

They basically have the same hair

To reiterate this fact, they are now scalp twins. They basically look like salt-and-pepper Barbie and Ken.

As Kimye's eight-couple ski trip from January proves, ski trips are basically the preferred action of people who are in the process of nesting. Basically, it's what married celebrities like to do once they're past the "making out at a basketball game" phase.

They adore their dog child

I mean, really though. They're one big happy family.

They're Set In Their Ways

They're just like any old married couple, in that they're set in their ways, and with these two, that means looking comically different. While they may merge together on some things, like their hair, this pair will definitely never dress the same.

But ultimately, their love is palpable

Even though in the brief moments that I'm imagining they engage in married-couple bickering, you really can't deny that these two are heavily in lurve.

More like this
What Is Ariana Grande's Net Worth? When It Comes To Money, She Has No “Problem”
By Hugh McIntyre
Lady Gaga Delivered A Million-Dollar Performance At A Private Wedding
By Maxine Harrison
Everything To Know About The Musical ‘Joker’ Sequel – & Lady Gaga’s Role
By El Hunt
Why Sarah Jessica Parker Wanted Fans To Stop Calling Her Hair Choice “Brave”
By Brad Witter
Get Even More From Bustle — Sign Up For The Newsletter