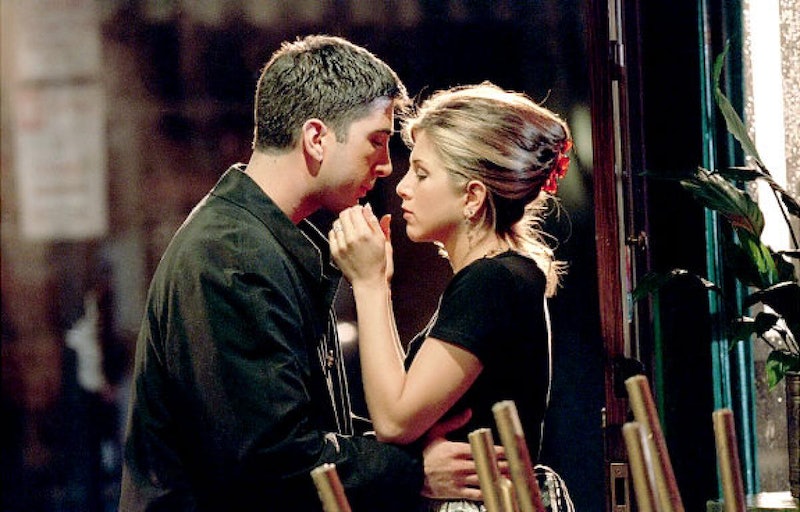 On the whole, we’re a society that loves romance. We like to see people bind together, pledging devotion and compassion, trading intimacies and expressions of appreciation that might never be found beyond the walls of their union. But as much as we do love this whole ordeal, we’re not willing to hand a happy ending over to just about anyone. You have to earn it. Not by proving yourself valiant and whole of heart, but by trudging through months — no, years — of contention, misery, angst, ennui, and any other variation on plain ol’ bummed out-ness that you can muster. Oh, and hijinks. There must be hijinks. Just ask Ross and Rachel from Friends .

And once you and your would-be partner are steeped almost irreparably in what seems like a never ending typhoon of dejection and agony, pining ceaselessly for one another but constantly pushing each other away, then you’ll be worthy of one another’s love, as well as our attention. You’ll be what we call a “Will They Won’t They,” the greatest sort of romantic epic known to modern humankind.

So let’s take a moment to look back upon these emotional blitzkriegs and determine which among them is the truest, most romantic, most volatile, most uncertain “Will They Won’t They” of all.

“Will They Won’t They” type: “They Dated, He Messed Up, They Broke Up, Rinse, Repeat, But I Think They’ll End Up Together”

Until: They ended up together

Assessment: Friends seems to think that its central love affair is the kingpin of this trope in popular culture. Then again, he made a list about her flaws, slept with the girl from the copy place, lied to her about annulling their drunken Vegas wedding, and got all high-pitchy all the time, so I kind of stopped rooting for those two after a while.

“Will They Won’t They” type: “They Dated Briefly and then Broke Up, But Have Indicated Interest Sporadically Ever Since, and I Think They’ll End Up Together”

Lasted for: Eight seasons, although most of us had kind of tuned out by the sixth

Until: A particularly anticlimactic reveal that they’re dating again, and will ultimately end up married

Assessment: One of the poorer executions of the trope, especially for such a likable show, perhaps considering the fact that creator Bill Lawrence never wanted them to end up together and intentionally drove them apart early in order to kill the possibility. Oh, how little he knew then of American television.

From: How I Met Your Mother

“Will They Won’t They” type: “We Already Know for Certain That He Doesn’t End Up with Her, But I Still Think They They’ll End Up Together”

Lasted for: Nine seasons of painstaking deceit, and a decade and a half of epilogue

Until: Somehow, against all odds and reason and common decency, they do end up together

Assessment: Even the Internet was unprepared for the rage incurred by this union.

The Nanny and Mr. Sheffield

Until: Eh, whatever, they end up together

Assessment: One of the few examples that didn’t rob the show of too much of its humor, as the odd couple dynamic remained throughout their likewise hijinks-infused steady relationship.

“Will They Won’t They” type: “I Guess We’re Supposed to Root for These Two to Get Together, Since They’re the Only Young and Pretty People Around, Plus the Camera Keeps Diverting to Them, So, Yeah, I Think They’ll End Up Together”

Until: They began their courtship and the life force of The Office died on impact

Assessment: Without question the most boring and chemically deficient romance that the American public ever cared so arduously about. (And we did. We all did. We still care.)

“Will They Won’t They” type: “She Likes Coffee and He’s Always Telling Her to Drink Tea, But I Think They’ll End Up Together”

Until: …they kiss, insinuating that they will indeed end up together

Assessment: Things were going just fine the writers went hog wild and roped in Lorelai’s ex-husband to complicate matters. And by complicate matters, I mean he really had a way of undercutting what was on the whole an honest and earthy relationship.

“Will They Won’t They” type: “God, They Absolutely Hate Each Other! …But I Think They’ll End Up Together”

Lasted for: Six seasons of yelling, insulting, slapping, chasing each other to Europe, and ruining poor Frasier’s life

Until: They did not end up together! In a huge reversal of theme, Diane leaves Sam at the altar at the very last minute (confirming his suspicions that she might) and jets off to Hollywood, not to return for another six years… when, once again despite their mutual feelings for one another, they do not end up together

Assessment: The true great sitcom love story, picture perfect ending or no. Sam and Diane could not have been more different, and were rattled to the core and at times disgusted by their attraction to one another. That they never tied the knot is the best testament to their brand of romance: Love is illogical, chaotic, and occasionally toxic. It rarely makes sense and frequently doesn’t work out. But that doesn’t mean it isn’t worthwhile.

More like this
Courteney Cox & Laura Dern Proved Their BFF Status With Matching Tattoos
By El Hunt
'Friends' Star Maggie Wheeler Offers Support To Matthew Perry After Reading His Memoir
By Alyssa Lapid
Dorothy Wang & Morgan Stewart Were The Ultimate BFFs On 'RKOBH'
By Sophie McEvoy
Keke Palmer Shares The Sex Of Her & Darius Jackson's Baby
By Jake Viswanath
Get Even More From Bustle — Sign Up For The Newsletter
From hair trends to relationship advice, our daily newsletter has everything you need to sound like a person who’s on TikTok, even if you aren’t.