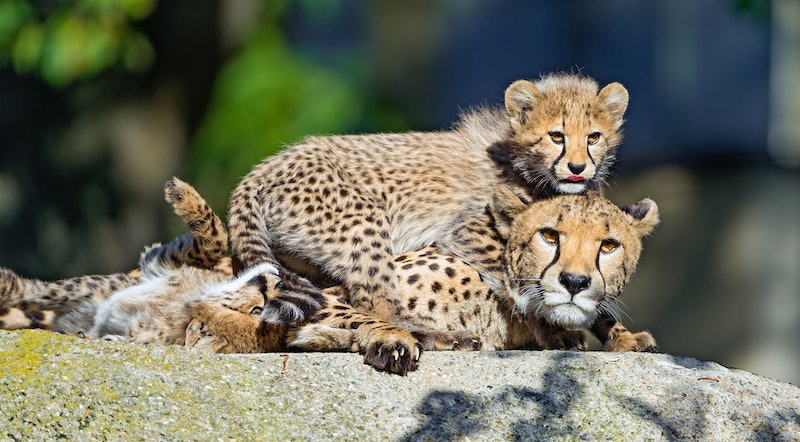 Joan Didion famously wrote that we tell ourselves stories in order to live. It can just as easily be said that we listen to stories in order to learn how to. I think most of the time, we turn to books for answers we don't fully realize we're looking for. But when I picked up Selfish, Shallow, and Self Absorbed: Sixteen Writers on the Decision Not to Have Kids, edited by Meghan Daum, I knew I was doing it because I needed someone to tell me something about my own life.

I recently turned 30, and have been jumping between radical extremes of my own "Do I want children?" debate for most of the last decade. For a long time it was, "Eeeeewwww babies NO THANK YOU," and then for a while motherhood seemed like the most obvious choice in the world — a shift which I took to mean that I had "grown up" in some important way. But now I'm a lot less sure how I feel about any of it — maybe because some of my friends are getting married and having children and the issue no longer feels so abstract. I don't "feel old," but knowing that my fertility will start to dip in just a few years makes the passage of my life through time feel tangible in a new, more urgent way.

Almost all of the essays in Selfish, Shallow, and Self-Absorbed are by writers over 40, which gives them the reassuring air of survival and wisdom. But because of their presumed wisdom, as I read I found myself ferreting after clues as to my own feelings, or how I should feel, or reassurance that I’m feeling the right things as a woman/feminist/general-human-person, in a way that made reading it a bit of an emotional and existential roller coaster. Especially since what I sometimes think I should feel and what I actually do feel don't always sync up so perfectly. Funny how that works.

Reading this book left me with more questions than answers — but in a way, that's OK, necessary, and maybe the point of it all. Here's what I was thinking:

Is "Having It All" the Right Thing for Everyone?

Take Anna Holmes' "Mommy Fearest." Her life circumstances and opinions mirror my own so uncannily that as I read I had the visceral urge to yell, "OH MY GOD YES THERE IS SOMEONE OUT THERE WHO GETS ME." She talks about a lot of stuff, but the crux of the essay is that when it comes to parenting, she's "afraid of her own competence," meaning she'd be so intensely committed to parenting that she'd probably skimp on other parts of her life that she'd objectively rather not sacrifice. She writes:

Mothers who are able to successfully combine work and family are all around me, yet the compatibility of career and kids remains a concept I understand intellectually but seem emotionally unable to accept. [...] I don't believe I can do the things I want to do in life and also be a parent to kids, nor am I willing to find out.

Though I wouldn't yet say I'm not "willing to find out," I share a lot of her wariness about how my desired lifestyle will mesh with being a mom. I often get the sense, though, that as a good feminist, I'm not actually supposed to say that — ambivalence can be seen as suggesting it's impossible to be a good mom and have a successful career, which obviously many women are more than capable of doing. Or people assume I'm being defeatist, and that all I need is a good pep talk.

But I think that saying, "Of COURSE you can do both! Duh!" can be both condescending and disingenuous. Not every woman can do both things simultaneously up to her own ideal standards, so some might choose only one. Is accepting that we have limits to what we can reasonably manage, and that life can't accommodate absolutely everything, really some sort of feminist failure? As I read the complex personal narratives in this book, I became increasingly suspicious of claims that our choices and priorities can ever be that cut-and-dry.

Should You Sacrifice Your Own Desires For Love?

While we're on the subject of messy priorities, let's talk about this: my fear of all fears is that I'll fall in love with a man who wants kids and convince myself I want them too, because what I really want is to stop him from leaving me. If men want to be parents in even greater numbers than women, where does that put the women, like me, who place a huge premium on romantic love but aren't sure about the whole babies thing? Objectively, as both an autonomous human and a feminist, I believe I should never make a decision that massive for the sake of anyone's happiness but my own. But I know myself well enough to know that love can give me... objectivity problems.

Reading Selfish, Shallow, and Self Absorbed didn't give me easy reassurance on this one. Many of the women in the book ultimately found happy and fulfilling relationships, but many also acknowledged that baby drama had destabilized what they thought were lifelong commitments. Paul Lisicky recalls an incident in "The New Rhoda" where two men in their early 40s admit they want to date younger women because "Yes, they still want to be fathers, and they could never expect such fertility in anyone their own age." Which is terrible thing to read if you aren't 100 percent sure you want kids before 35.

I honestly don't know how to reconcile my feelings about this one, and I might not figure it out until I've already made my choices and have to find a way to live with them. Rarely do the conflicts between our ideals and our emotional truths get messier than when we're trying to sort through our feelings about sex, relationships, and motherhood — things that carry major social and political baggage, but are as deeply personal and emotionally intense as it gets.

Do I Even Need To Be Thinking About This Stuff Yet?

What the book did make me realize is that obsessing over this stuff at the age of 30 is kind of like chasing your tail. Almost every essayist seemed very happy with his or her life, but most took a winding, knotty road to arrive at that peace of mind. I have no idea how the next several years of my life will unfold, what sort of things I'll end up wanting, and what will even be possible. As Pam Houston said in her essay "The Trouble With Having it All":

Nobody gets to have it all, not even Donald Trump. You will have one thing or another depending on what choice you make. Or you will have both things in limited amounts, and that might turn out to be perfect, just exactly the life you want.

So these writers and their stories did, in fact, teach me something valuable: whatever happens, and however confusing it gets along the way, it will be fine. Because it will be my life, and I will have chosen it — whatever my reasons end up being.

More like this
The Best Time To Date After A Breakup, According To Experts
By Bustle Editors
12 Ways You're Sabotaging Your Love Life
By Teresa Newsome and Lexi Inks
The Top Mistakes Scorpios Make In Relationships (& How To Avoid Them)
By Nina Kahn
How To Do The Intimacy-Boosting Lotus Sex Position
By Laken Howard and Lexi Inks
Get Even More From Bustle — Sign Up For The Newsletter