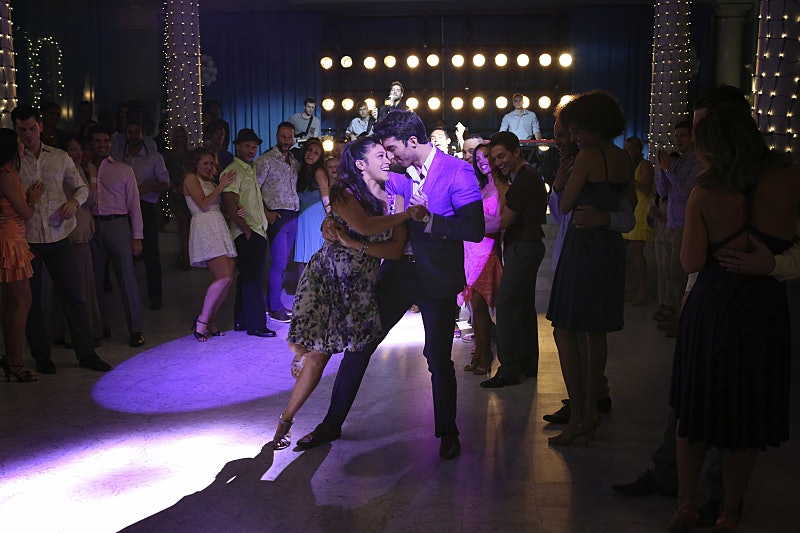 Just like Jane loves her romance novels, I love Jane on Jane the Virgin — and whenever I think I couldn't adore Jane any more than I already do, she proves me wrong. Although Jane's love life with Rafael was suffering in "Chapter 16," Jane and Rafael shared a dance when real-life Spanish pop singer David Bisbal performed at the Marbella. Unfortunately, the dance was only one of those amazing romantic moments in Jane's mind — and not the real thing. But hey! We still got to see Gina Rodriguez and Justin Baldoni get their salsa on ... even if it wasn't happening in real-fake life for Jane.

Rafael proposed to Jane in "Chapter 15," and like the responsible, articulate, beautiful woman she is (I told you I loved her), she said no. Understandably, Rafael was feeling a bit rejected and I was concerned when he was bonding with Petra over Diablo the dog (the dog belonged to one of Bisbal's employees). Jane tried to make things right with Rafael by doing a sexy dance to Rafael's favorite song ("Livin' On A Prayer"), but Petra saw it instead. When Jane finally did get a chance to talk to Rafael, she realized her saying no to his proposal wasn't her fault — he had proposed too early, so he couldn't be blaming her for what happened. Oh, Jane — you should probably just marry me (or like, maybe just be my best friend).

After their discussion, Jane hoped she would see Rafael at Bisbal's performance and when he didn't show, she dreamed up a romantic (and fun) dance moment between them. (You can thank Jane's new romance writing workshop she's taking, led by Jane Seymour, for the inspiration.)

Rodriguez actually started out as a salsa dancer (although I'm sure the fake pregnant belly didn't make things easy on her), but two other characters stole the dance spotlight. The highlight of the fantasy dance sequence was when Rogelio dipped Michael (the two of them had been bonding when Rogelio shadowed Michael's detective duties) and my heart was a bit broken when I realized all of this was in Jane's imagination.

Although the dance wasn't real, Jane and Rafael eventually making up by the end of the episode was. And as the Latin Lover Narrator pointed out, sometimes real romance isn't grand, but it is meaningful. And now Jane and Rafael can move on and grow their family — perhaps even discovering the truth of where Rafael's mom is.