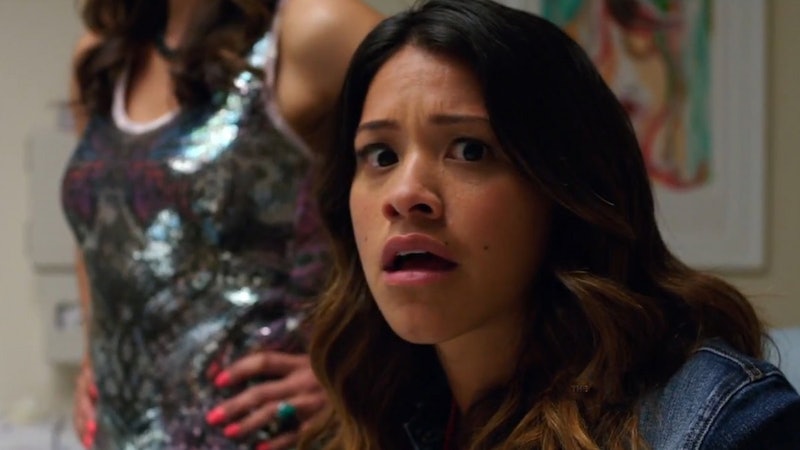 After twelve weeks of speculation, Tuesday night's Jane the Virgin episode finally gave viewers the answer to the biggest mystery of the season: the identity of the "man without a face," Sin Rostro. No, it wasn't Emilio, the suspected drug kingpin, or even Rafael, his hotelier son and holder of many passports — the man behind some of the darkest, creepiest crimes of the season turned out, to both viewers' and the narrator's surprise, not to be a man at all, but instead be Rose, Emilio's cheating, lying, and apparently evil wife.

The reveal of Sin Rostro was a huge moment for the show, giving closure to one of the most compelling TV mysteries since "Who Shot J.R.?" (well, in my opinion, anyway) while still leaving plenty of questions to be answered in episodes to come. For instance: is Rose working alone, or has she tangled others up in her plans? Are Jane and Raphael in danger? And, most pressingly: how do you bury someone alive in cement and get away with it?

Yet while fans won't know the answers to those mysteries for another week, at least, Sin Rostro's reveal did make one thing certain: that Jane, 12 episodes in, has solidified itself as one of the most feminist and progressive shows on television. Not that its importance wasn't established before, of course; the very fact a show about a pregnant Latina, her extended family, and the multi-racial, LGBT-inclusive others in her life, existed in the first place proved that Jane was a major challenge to TV's norms. But it was Tuesday's episode, in which the show's super-villain was revealed to be a woman — and even more, a woman who doesn't identify as straight — that made it certain: Jane is doing more to fight sexism and support diversity than practically anything else on network TV.

And it's doing so not just by casting women of color and/or LGBT women in its lead roles, although that's certainly cause for celebration. What makes Jane so feminist is its unwillingness to let them fall into stereotypes. The pregnant virgin is, well, a pregnant virgin; the booty shorts-wearing young mom is also a loving, dutiful daughter; the main villain is not sexed-up or on a man-hating rampage, but a believably complicated woman with legitimate reasons, if not excuses, for her sinister behavior. There are so many movies and TV shows who love nothing more than utilizing the "crazy female villain" stereotype, but Jane is not one of them. This show believes in giving its female characters the emotional arcs and backstories they deserve, no matter how telenovela-like their antics may get.

And the fact that Jane is only halfway through its first season makes this even more commendable. Far too many network TV series, ShondaLand productions excluded, take several years and pressure from critics just to introduce a single non-white, non-straight lead character. Jane, however, did it all in its very first episode, and not as a ratings ploy or forgettable story, but as the heart of its show. It's one of the many things that makes the series so special, as well as such a huge, feminist win for TV.

More like this
These 2 Tragic ‘Stranger Things’ Finale Moments Were Improvised By The Actors
By Grace Wehniainen
17 BTS 'Love Island' Secrets Only Real Fans Will Know About
By Bustle UK
Adele’s All-Female Lineup Includes Kacey Musgraves, Mahalia, & Self Esteem
By Shahed Ezaydi
Jesse Tyler Ferguson Had A Funny Run-In With A Fellow ‘Modern Family’ Alum
By Grace Wehniainen
Get Even More From Bustle — Sign Up For The Newsletter