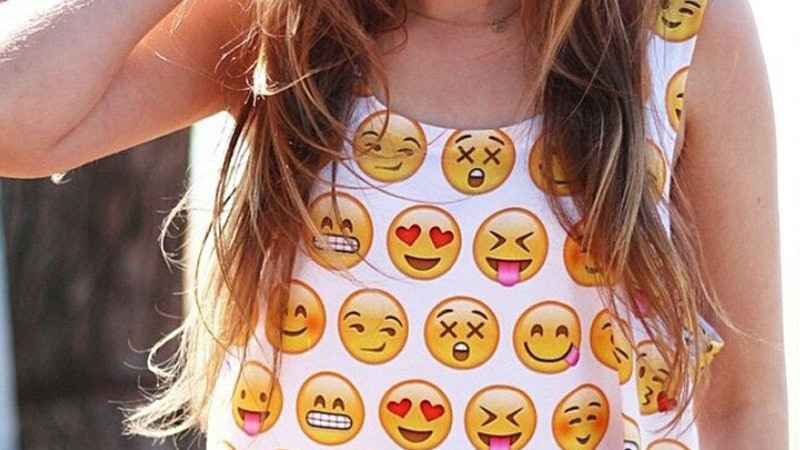 But no matter the root cause, you decided to stay in the dark while your friends became obsessed with the two dancing twin ladies and the weird little smiling poop and the eggplant that is actually a penis — and now, it's too late. Everyone you know and love exists in a parallel universe, one where they communicate almost exclusively via that one lady in the pink shirt with her hand flat next to her head.

What is she doing? Is she shrugging? Is she checking to see if it is raining? Is she trying to heft a pair of testicles that are just outside of the frame? It's too late for you to figure out what she's doing, unfortunately; you are living in an emoji world, and you are a word texting girl. May God have mercy on your soul. Or, as you'd say in emoji: prayer hands-jazz hands-hamburger-ballerina lady-sex hotel (I think?).

1. You Are Completely Lost On All Group Chats

You can't understand a word your friends are saying to each other, or why they're cracking up over a picture of a rocket ship. You endure daily mass messages about how you're all going to "meet at the hot dog at crying smiley face o'clock" in silence and humility, because you know if you reveal your ignorance, your friends will just text skulls and poops at you until you cry for mercy (using actual words, of course).

2. Your Own Attempts To Use Emojis Usually Fail

You're only human — so of course, when you found out that the emoji train was here to stay, you gave it your best shot. But it just never took. Your 13-year-old niece had to inform you that your text to the entire family included a request someone pick up a crate of fresh vaginas at the farm stand while they're out. And you may have also accidentally sext emoji'd your boo that you want to train for a half-marathon together?

3. You Have To Google Emoji Meanings, Just To Be Sure

You legit did not know if those two hands next to each other were supposed to be clapping, or pushing you away, or what. Like, they're not actually doing anything! It's not very intuitive at all.

4. Even Looking At Your Emoji Keyboard Stresses You Out

Why do people even need half of these? What does this anchor mean? Who needs to tell someone about an anchor so quickly that they can't type out the word "anchor"? Oh god, is this anchor just another emoji-phor for "penis"?

5. Your Phone Might Not Even Have Emojis In The First Place

And you didn't even realize it until you started to wonder why so many of your friends were texting you a dozen questions marks in a row.

6. You Don't Get Why People Don't Want To Use Words Anymore

Words are great! They're, like, the foundation of civilization and stuff. They help you convey your feelings in great detail, describe the wonders of nature, and allow you to create a fan-fiction world where Harry Potter and Batman have sex — oh, excuse me, make love. Why would you want to cast such magical, useful things out of your life?

Every time you look at an incomprehensible string of emojis, you feel old. Like, really old. Not even your usual "I think I could have technically given birth to Kylie Jenner" old. More like "I listen to big band music on the radio and tell my grandchildren all about how much tinfoil I collected for the Allied effort during World War II" old. OLD.

8. You Have Mostly Given Up On Learning

It's too late for me. You go on. Live to tell my story! And also live to find out if that coiled snake emoji is just supposed to be a penis (are they ALL supposed to be penises? Seriously? What is the deal?!)

9. You Still Hold Out Hope That Emojis May Someday Pass

You outlived AOL, Blockbuster, and that Tamagochi you had in third grade (you outlived the Tamagochi by accident, but still). You've weathered the fickle trends of technology before, and you'll do it again. Emojis will be roasting in the fiery pits of forgotten tech hell before you know it!

Unless, of course, emojis do end up getting replaced ... by something way, way worse. Something way more confusing. Some language where every single symbol means "penis." Nooooooooooooo!