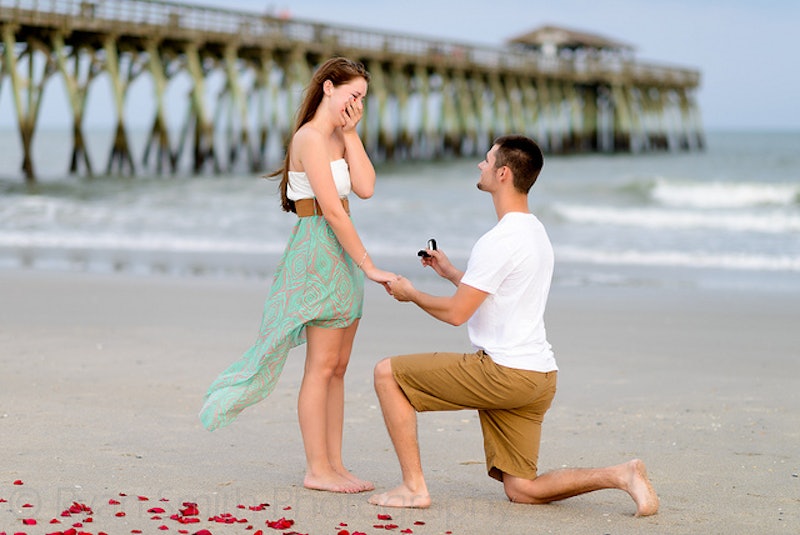 Today is National Proposal Day, and I know what you're thinking, isn't every day National Proposal Day on the internet? Yes, it may be, but today is the real National Proposal Day, because a guy named John Michael O'Loughlin said so. He invented the holiday after his cousin's boyfriend wouldn't pop the question after years of dating. I can't help but wonder if that was really Johnny's place to intervene but that's besides the point. Anyway, you're probably wondering why March 20? Well, today, is also the first day of spring, which means day and night are equal lengths worldwide. This symbolizes two equal efforts, aka what a successful marriage is. (That Johnny was quite the romantic, huh?) Whether proposals and engagements make you want to barf or cry tears of joy, there's a ton of incredibly interesting facts on engagements. Celebrate with us below, will ya?

Sure, you've probably seen your fair share of ring selfies on Instagram and Facebook — but 60 percent? What surprises me about this is the fact that 60 percent of brides-to-be actually have nails that are ready for a #RingSelfie. You guys are good. And, our recently-engaged pals are quick: According to the David's Bridal "What's on Brides' Minds" survey, 37 percent of women posted a picture of their ring within an hour of their engagement, while 31 percent gave it a couple hours longer.

2. Most People Would Rather Have A Romantic Proposal Over An Amazing Ring

Proposals matter, people. The David's Bridal found that 56 percent of people would rather have the best proposal ever but not be in love with the ring. Good news for people who have no idea what kind of engagement ring to get.

Hear that? With how easy it is these days for videos of random people's proposals to show up on your newsfeed, it would be easy to think that people want viral-worthy proposals. Nope, people want it on the DL, according to Match.com's recent Singles In America survey. No baseball games, flash mobs, music videos, etc. That's kind of refreshing.

Only seven percent of single men think it would be ideal if the woman proposed, but before you start screaming, women aren't too fond of popping the question either. Only two percent would want to propose.

And people want their DIAMONDS. Match.com found that 73 percent of singles think a diamond engagement ring is ideal for a proposal.

6. But You Probably Don't Want Yours To Be That Much...

Research from Emory University last year found that those who shelled out between $2,000-$4,000 on engagement rings were 1.3 times more likely to get divorced than those who spent between $500 and $2,000. But no, you can't get away with less than $500 — that's linked to divorce, too. Of course.

7. The Average Engagement Is 14 Months Long

But you do what's best for you and your relationship, even if that means waiting five years a la Jason Segel and Emily Blunt.

More like this
23 Super Sweet Things To Write In A Valentine's Day Card
By Karen Belz and Lexi Inks
30 Sweet Valentine's Day Caption Ideas For Long-Distance Relationships
By Syeda Khaula Saad and Carolyn Steber
12 Anti-Valentine’s Day Memes For People Who Are So Over Romance
By Meghan Bassett
Here’s What TikTok's "Mascara” Trend Is *Really* About
By El Hunt
Get Even More From Bustle — Sign Up For The Newsletter
From hair trends to relationship advice, our daily newsletter has everything you need to sound like a person who’s on TikTok, even if you aren’t.