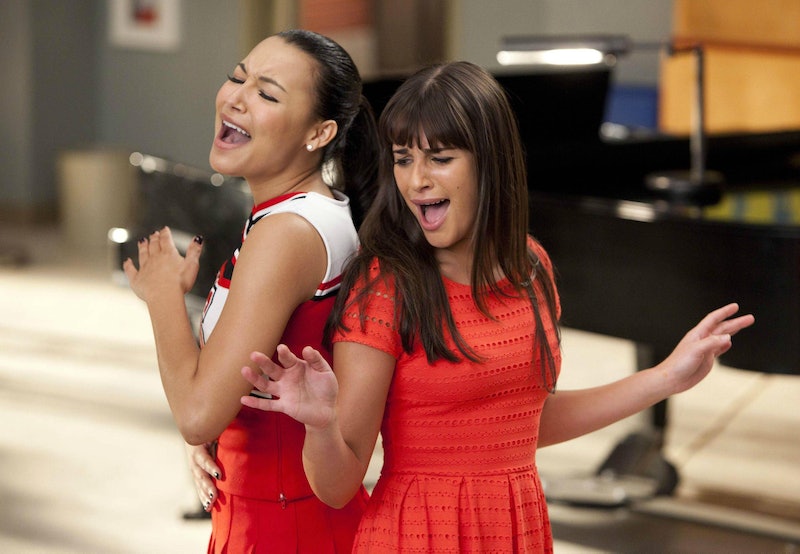 As someone who has had one foot firmly planted in the theater world since the age of five, I can attest to the fact that theater people have two very separate friend groups. First, there are our "normal" friends. They might not even be normal—they could be moonlighting as street fighters or secretly cloning pygmy sheep in their basement—but they'd still be comparatively "normal" next to our other friend group. I'm speaking, of course, of our theater friends. It would take some supreme effort to out-weird them, the kind that I doubt the world will ever be fully prepared for.

Here's the thing about theater people: outsiders know we are weird. It's not like we have to buy a bunch of ad space out in the New York Times and write "THEATER PEOPLE ARE ACTUALLY KIND OF FREAKS" in all caps in the Lifestyle section, because people have just innately understood that probably since Sophocles was writing plays. But I think that they will never be able to fully grasp just how weird we are, because we go to great lengths not to reveal the true nature of our theater-induced insanity when we're in their presence.

Normal friends, we do not resent you for this. We need you in our lives so we can touch base on Planet Normalcy. But the second you leave us alone in a room with a bunch of other theater geeks we instantly dissolve into our ~true selves~, and the real shenanigans begin. There are a slew of things we do with our theater friends we wouldn't dream of doing anywhere else:

Theater people don't choose to sing. We sing because we must. And in our defense, singing releases the same endorphin rush as eating chocolate and having sex, so our compulsions are totally valid. But weirdly, when you're in the normal world, people think you're trying to be a big ol' show-off. I mean, yeah, we kind of rock at what we do, but that's totally not why we're doing it. Fellow theater humans get it.

Strip our shirts off in the middle of a heartfelt conversation

I cannot count the number of #realtalk moments I've had backstage that have occurred simultaneously with most of us getting half-naked and rooting around the floor, butts out, looking for our costumes. Our nekked-ness is so common, it doesn't faze even the deepest of conversations at this point.

Blatant brag instead of humble brag

It's not often that you get good news when you're a theater person, and other theater people totally get that struggle. It's basically a free pass to call each other screaming whenever you land a part, and recount the glory of your audition in excruciating detail. These are the moments we LIVE for. We've gotta brag to someone without sounding like an ass.

Complain about your "real life"

Theater friends make such a safe space for complaining about the real world, because that world is so entirely separate from the geek-sauce on stage. It's your theater friends who let you complain about work, about your family, about your significant other or BFF or pretty much anything under the sun.

With our non-theater friends, we might throw out a white lie every now and then to smooth over a situation: "No, you didn't look stupid flirting with that stranger," or "Yeah, those jeans did look good on you, too bad you lost them," etc. But with theater friends, we already know they have ridiculously thick skin from countless rejections and years of taking direction from all types of people. We will one hundred percent tell them when their screltching song sucks or go out of our way to make sure they never wear those clogs to an audition again (guilty as charged).

Geek out over your faves

AARON TVEIT, SUTTON FOSTER, JONATHON GROFF, AUDRA MCDONALD, JENNIFER DAMIANO, ETC, ETC, ETC until we are all dead. Yes, the real world people often know who these humans are, but if they can't rehash their entire body of work in exhaustive detail, what's the pooiiinttt?

At the risk of getting major flack for this, I will do hereby decree: non-theater kids, your costume parties tried. They really did. You just have way too much dignity left to commit the way that we theater kids do.

Real people just assume we are doing this to be dramatic, which is fair, because we often are. But this is occasionally a real necessity and non-theater people do NOT RESPECT IT AT ALL. I get why it makes them uncomfortable, but ugh, it is such a relief to have the quiet nod of understanding from a theater person at the end of a long and stressfully quiet day.

Your real friends will always tell you that you did a good job, bless their hearts. Even if you sucked, they will be your biggest cheerleaders and we love love love them for it. That being said, when you get a compliment from a theater friend, you know that they mean it. They've been in the game long enough and known you long enough to be able to discern a bad performance from a good one, so you feel like you can trust them when they say something nice about your work.

Turn any and all public forums into your personal stage

I've never had an instance with a theater friend where I've done something dramatic in public and they haven't automatically joined me. My littlest sister is also a theater kid and we really shouldn't even be let outside of the house, lest we start accidentally singing "You make my balls so blue!" from Heathers The Musical in the middle of Nordstrom again. When you do this with the normals...they're understandably not so hip.

Ridiculously over exaggerate a story for effect

They one hundred percent know that Hunter Parrish didn't actually wink at you that one time you were in the standing room during Spring Awakening, but they'll nod and play along because all theater people know that stories are just plain not exciting without any embellishment. Your real friends, however, will totally believe you (and also not care very much, because for whatever reason, they probably did not worship at the altar of Hunter Parrish's butt).

Drink at 10PM on a Tuesday

Arguably you can do this with your other friends, but admit it: It would be a little weird to text someone and be like, "Hey, let's hang out really late on a work night for no particular reason and side-eye people who are emotionally invested in sports channels at the bar". Theater kids are always getting out of rehearsals at that time, though, so they're raring to go.

I have made an ass of myself in front of my theater friends more times than I can count. We make awkward stage choices, or reach a little too high for that belt, or sometimes fail so hard that we all fall on top of each other like dominoes in the middle of a dance rehearsal. I never think anything of it, even though I am the kind of person who otherwise would dwell on little embarrassments for days. With theater friends, though, it's like you have an all-access pass to be an idiot however many times you need.

For every "theater geek" out there, maybe one out of twenty of them will be commercially successful, and even that might be an overestimate. But we all had big Idina Menzel-sized dreams at one point, and even though it might be embarrassing to mention them to other friends, other theater people totally get it, no matter where they are in their careers.

Cry about auditions and never talk about it again

Every now and then, there is a full-scale freakout, because it happens. This is an insane field to be in and sometimes water just leaks out of your eyeballs about it. Theater people know this is normal and will let you cry on their shoulder and then respectfully NEVER mention it again.

Your normal friends, on the other hand, have no prior experience with audition sadness and will probably think you are dying, because they love you and care about you, when really you are just whining because you're feeling sorry for yourself. And they'll never forget it after you freak out that one time. "Hey, remember when you cried at Safeway?" Yes, Darlene. I remember. MOVE ON.

I have sometimes walked into rehearsal and spouted literal nonsense words. Nobody ever asks me what the eff I'm trying to say. They just know.