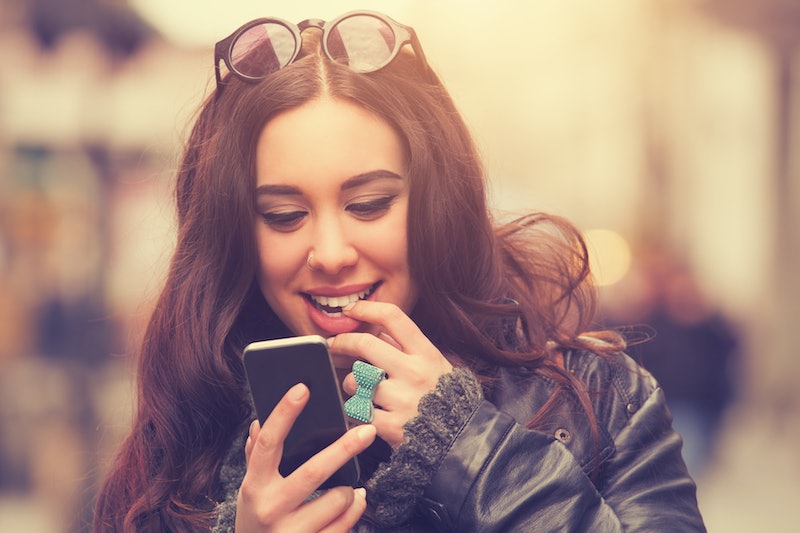 If you’re in a long-term relationship, decoding text messages (and sexts!) from your mate has hopefully become less stressful and more fun. But like chewing gum and walking, navigating booty calls, new crushes and early relationships is a bit of a minefield as it is, and can become a living nightmare when ambiguous texts are thrown into the mix. For some, emojis complicate everything further; for others, trying to decide what kind of punctuation to use or decode other people's punctuation (a different kind of O.P.P.) is enough to cause a small-scale meltdown. Back in the 1950s, many moons before smartphones hit the scene, psychologist Albert Mehrabian found that just 7 percent of communication is verbal, which leaves the other 93 percent to be lost in the satellites when it comes to texts (and sexts). It's enough to make a person want to never send a text again, only that person would immediately become obsolete and may or may not wind up dying alone (TBD).

To that end, here’s a compilation of 15 fairly common texts (all of which I may or may not have received personally), complete with translation to cut through all the vague uncertainty and straight to the fun part: the chase.

Make sure you’re wearing clean underwear, because this only means one thing: “Let’s bang.” Don’t get it twisted.

2. A single heart emoji at midnight

3. A random emoji that could be construed as mildly sexual

If this is the response you get to a proposed hang, this translates as: “I’m just not that into you.” We make time for the people we really like—and the “maybe” clinches it.

6. “Whoops, totally forgot to write back!”

This is a tricky one. If this is from someone new, they’re probably playing games. Reserve the small chance that they could just be seriously busy, but let’s be real: If we’re really into someone, we know when it’s our turn to text.

Nope, not possible. We all check our phones all of the time. This is a lie.

Straightforward. If you’re down, send a sexy selfie—and ask the person on the other side of the screen to respond in kind.

If you receive this after 8 p.m., this is a thinly veiled booty call.

This person isn’t interested in anything serious, but they are into something without too many strings. Namely: no strings.

Unless you’re involved in a very codependent relationship, this is in reference to sex. Don’t read into it.

12. A photo of someone’s genitals

If this was solicited, enjoy. If not, but you like it — well, enjoy. If not solicited or desired, feel free to delete this person from your contacts without further ado.

13. A link to something random

14. A link to something related to a conversation you’ve had recently

We have a winner, folks! This person is paying attention and wants you to know it.

15. “Hi” (or the waving hand emoji, or some other random emoji apropos of nothing)

Basically this is a lazy “thinking of you” text, without putting much effort or feeling into it. If you want, just send a simple “Hi” back (after letting enough time lapse that you don’t appear too eager, natch). Ball: back in the opposite court. Boom. Ta-da! Texts, decoded. Good luck out there.