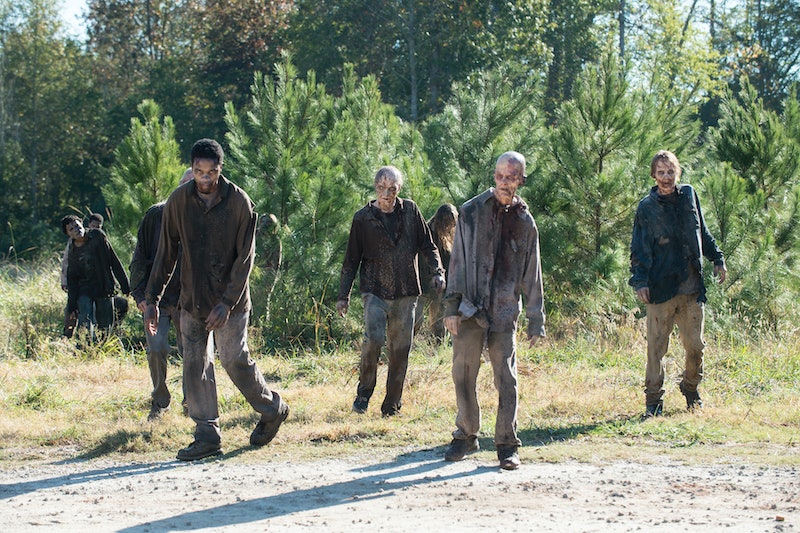 Another week, another episode of The Walking Dead, and we're still no closer to finding out who these hinted at but not yet seen Wolves are. It seems too late now for the Saviors to be introduced this season, so could the Wolves on The Walking Dead be the Scavengers from the comics? Another potential option is The Whisperers, a bizarre group of survivors who make a cameo appearance in the comic books. They are very religious, and wear zombie skin suits for safety. However, I think the Scavengers are the best option at this point. I would hope that they are connected to the Ws on the walkers as well. Otherwise, this half of Season 5 is far too complicated.

While wolves are commonly associated with hunting, I did some research and discovered an interesting tidbit about the animals. Though they do usually hunt, it turns out that wolf packs will scavenge when necessary — and I think a zombie apocalypse would make that vital. According to the Alaska Department of Fish and Game, they are most interested in "easy meals" and can adapt to their environment. Is this the nerdiest thing I have ever done in pursuit of answers on The Walking Dead? We'll see.

The most resounding piece of evidence that the Scavengers are the Wolves, which I have also mentioned before, is a panel in the comics where Derek, the leader of the Scavengers, presses up against the wall of the Alexandria Safe-Zone and says "little pig, little pig, let me in." As we all know, that is an allusion to the fairy tale The Three Little Pigs, and the famous refrain of the Big Bad Wolf. Should we be looking for Enid to sport a red hoodie next? She does like to go into the woods.

In the comics, the Scavengers are a group that our heroes find in Washington D.C. on a supply run. That's right, in the books they actually make it to the capitol. Believing the city to be abandoned like Atlanta, they discover that this group has been wandering around and taking what they can. They're a relatively large group, and seek shelter — but the Alexandria Safe-Zone does not want to recruit them. Their attack of sorts on Alexandria also directly leads to Rick becoming the leader. So it would make sense for this group to show up now. There is enough tension building within the walls of Alexandria and it's going to take something or some one from the outside to break them. Father Gabriel's warning and this insinuation that Rick Grimes and his lonely heart's club band are the real villains is interesting, but any good judge of character should be able to see the truth. Does Gabe not realize that the "Termites" were cannibals? Cannibals, Father. Let's keep the judgement to a minimum here.

Even if the Wolves/Scavengers aren't major antagonists, it would only take one battle and glimpse of "the real world" to prove to Deanna that Rick and the others are what Alexandria needs to survive. The Scavengers aren't major players in the comics, so this works really well. The Wolves could tip the balance of power just enough so that the gang is ready when Negan, the real threat, comes on the scene. What can I say? Sometimes a well-constructed red herring is just as exciting as an actual mystery.

More like this
'The Sandman’s Ending Is A Departure From Neil Gaiman’s Comic Book Series
By Kadin Burnett
The Best Memes & Tweets About Rachel's Group Date On 'The Bachelorette'
By Alyssa Lapid
Does 'Locke & Key’s Ending Mean There Could Be A Season 4?
By Sophia Moore
'The Simpsons' Will *Finally* Address How They “Predict The Future”
By Sam Ramsden
Get Even More From Bustle — Sign Up For The Newsletter